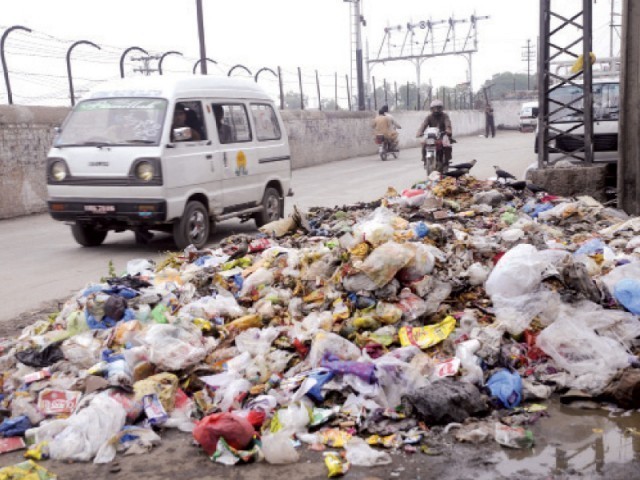 It is the responsibility of the relevant authorities to pick trash up thrown by us on the streets. PHOTO: AGHA MEHROZE/EXPRESS

Imagine driving through the busiest street of a major metropolitan city in Pakistan. What would you see? Buildings, vehicles, street vendors, a crowd of people? Obviously. But alongside this, you would also be welcomed by a heap of filthy, smelly garbage simple lying around the pavements.

And ironically, this view is not unique to one street; almost every street in all major areas of Pakistan has the same scene welcoming those who travel through them. If ones environment signifies ones psyche, then we Pakistanis indeed have very dirty minds.

But, as most would argue, this isn’t our fault… right?

Unfortunately, this is a prevailing attitude in our society which externalises everything. Primarily, it is the the citizen’s duty to keep their environment clean, not the government’s. If you litter in your house, you can’t expect your parents to come and clean up after you. It is you who will have to own up to your mistake and clean the house. But this is something we just don’t understand. Even Islam, which is kept on a high pedestal by an overwhelming majority of our people, demands cleanliness and has termed it half of our faith.

Yet we choose to ignore it.

Whenever I ask someone to not litter on the streets, I get the clichéd reply that since the streets are already dirty, throwing another wrapper won’t make a difference. But why do we forget that this heap of garbage is a collection of thousands of single wrappers? If each member of our society realised their responsibility towards our environment, we could have garbage-free roads.

However, as of right now, it seems like a distant dream.

I’ve always wondered why the people in our society adore filth, disarray, and junk that are spread all around. My observation led me to the conclusion that they don’t like messiness; rather they are just lazy. And also, unaware of the threats that are created by the pollution from garbage and other wastes. They don’t hold the knowledge that this self-created pollution is provoking our environmental conditions.

The greenhouse gases responsible for depletion of the ozone layer are a matter of great concern for climate scientists. The garbage that we throw on the streets does not get recycled and ultimately it gets disposed. The disposal of waste produces emissions of greenhouse gases. Apart from that, waste materials contain harmful chemicals which pollute the surrounding air and result in spreading diseases, such as asthma.

These huge mountains and plateaus of garbage become a breeding ground for rats, flies and mosquitoes and I don’t need to mention what kind of diseases these things carry with them.

Cleanliness and climate change are more relevant to us than political shams and fashion models being jailed for money-laundering schemes. Yet our people pay little heed to it. We need to get our priorities straight.

Now while a lot of damage has already been done, it’s not too late to change our ways.

As I mentioned earlier, the common man is unaware of the damages caused by the garbage pollution for the environment, therefore, the first and foremost duty of the educated population is to spread awareness. We can use social media to run campaigns against garbage being thrown on streets and roads.

The labour class are highly responsible for waste pollution since they don’t have proper sanitation or other hygiene related facilities. Unfortunately, they cannot be a part of the social media campaign, so what may be done to educate them in this regard?

First of all, I would like to suggest some measures that can prevent waste pollution:

– Placing handmade paper dustbins in our locality, working areas and wherever else we can.

– Educating individuals around us about the hazards of garbage pollution and most importantly, educating people who belong to the working class, for example; our drivers, domestic help, janitorial staff at work and the likes.

– Keeping affordability in mind, we can help the underprivileged have their own washrooms at their residences.

– One should avoid using plastic bags as it’s a huge source of garbage collection.

It is only after we have corrected our own selves that we might be in a place to criticise the government. Following are measures the government or relevant institutions must take to make the environment clean and healthy:

– The roads and streets must regularly be cleaned by the assigned authorities, particularly after rain.

– There must be dustbins installed at every residential and commercial street.

– The government must build public toilets where there is a need, particularly in slums.

Today is World Environment Day. Don’t just celebrate it by posting status updates about it on social media and changing your cover pictures. Do something substantial to save our environment.

The above mentioned precautions along with other effective measures can bring about a positive change in our deteriorating environment. All we need to do is fulfil our duty without any delay.

She is an MBA from IBA Sukkur. A former foreign exchange officer at MCB Bank, she also works as a freelance writer and blogger. She tweets as @rushna_khalil (twitter.com/rushna_khalil)

#LabourDay: Is Pakistan doing enough for its labourers?

Business grad in Pakistan? Start looking for a job!