Tomorrowland: A riveting ride into the future, with a twist 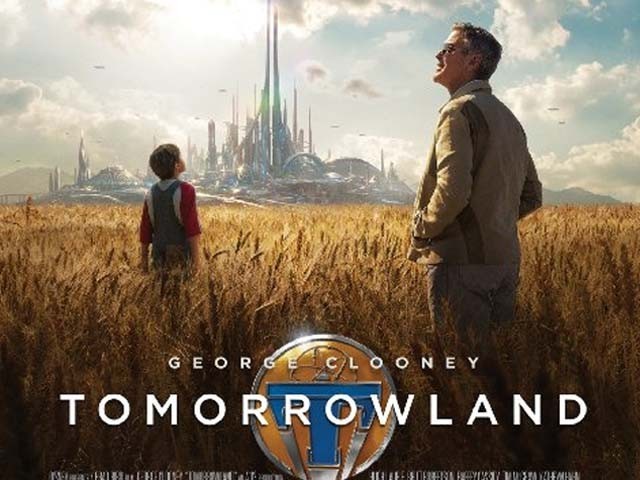 Tomorrowland is a futuristic movie; it highlights certain environmental issues, the cause for the end of the world, hence creating an unexpected twist. PHOTO: IMDb

Tomorrowland begins with the following line,

Certainly not what the audience was expecting to hear. The storyline which unfolds compels the viewers to put on their thinking hats in order to piece the puzzle together, while at the same time being awestruck by the brilliant and sleek futuristic world of Tomorrowland, rendered by computer graphics.

Directed by Brad Bird, the movie is set during 1964. However, Tomorrowland is a futuristic place where anyone from that time can enter this realm through a certain process. Frank Walker (George Clooney), full of ideas since a very young age, also visits this place, which is a utopian world for all the great minds living on earth. However, when Frank learns a dark secret about Tomorrowland, the decision-makers of this land exile him permanently and send him back to his present time in 1964.

Years later, fate plays its hand in making Frank and Casey Newton (Britt Robertson) meet. Casey herself has been to Tomorrowland and wants Frank’s help in order to re-enter this mysterious place. Casey, too, knows about the secret regarding the end of the world, which is why she cannot stay there for too long. Returning to Tomorrowland is imperative for them to in order to save the world, but chances seem slim.

Viewers will love the onscreen relationship between Casey and Frank, where Casey is full of life and is thinking for the better – Frank on the other hand, has grown up to be sarcastic. The viewers will find a number of humorous and satirical moments, adding value to the movie and allowing the script, which is a bit monotonous during the first half, to be light-hearted as well.

It is interesting to see that Tomorrowland is a Disney production, and very unlike its previous movies. It may be a bit difficult to comprehend, especially for the younger audience. The movie has two differing plots. Where in the first half we see Frank as a kid, in the second half he has grown into an adult who meets Casey. The second half, however, is about Frank and Casey’s struggle to return to Tomorrowland.

Will they survive the onslaught they face because of the secret they know?

Who is pursuing them?

What is the secret about Tomorrowland?

These are questions which the viewers will be asking during the various stages of the movie.

Although some parts of the story are catchy and interesting, which I feel is only because of Clooney’s presence; the rest of the script came off as dull and boring and does not quite live up to be Disney material. Tomorrowland is a futuristic movie; it highlights certain environmental issues, the cause for the end of the world, hence creating an unexpected twist.

The computer graphics used to create the futuristic world of Tomorrowland will keep you glued to the screen. However, viewers will find it difficult to understand a number of technologies – a constant confusion for the audience.

Where Casey and Frank dominate much of the screen time, it is Athena (Raffey Cassidy) – a former agent working for Tomorrowland, who at a crucial time in the plot reveals her true intentions and identity only to startle the viewer’s even further.

Tomorrowland stands quite apart from Brad Bird’s previous movies, who is famous for directing animated movies such as The Iron Giant, The Incredibles, Ratatouille, and the action packed movie, Mission: Impossible – Ghost Protocol. This movie, however, bring Bird’s directorial dexterity to the forefront as he takes the viewers across various dimensions within the story, which he has co-produced and co-written as well.

Tomorrowland could have been a much better movie if some confusing parts of the story were made easier to understand for the audience. Furthermore, by the time the movie ends, you will have a number of unanswered questions.

It is recommended that you watch Tomorrowland for the sake of having fun while giving your brain cells a rest. The adventure will enthral you, the special effects will astound you, and the secret, which Frank and Casey know, will shock you.