How I tackled the “Sir, I don’t think Shias are real Muslims” concept 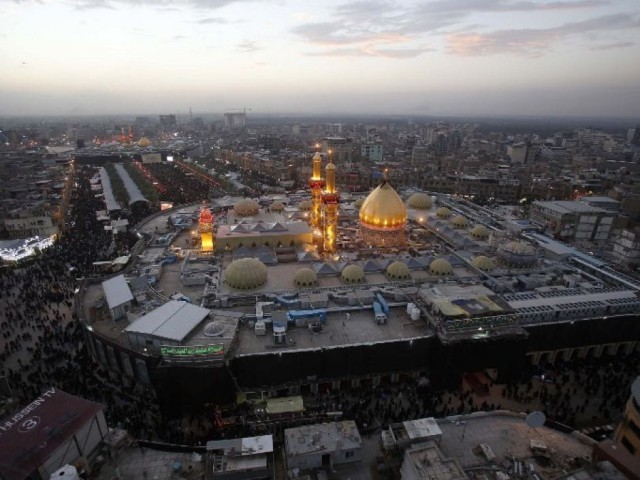 The shrine of Imam Hussain (RA) in the central city of Karbala. PHOTO: AFP

I started my career as a Religious Education (RE) teacher in September 2013, in a school that has nearly 1500 students ranging from the ages of 11 to 18. Of these, approximately 75% come from a Muslim background.

Due to the comments and vitriol usually directed towards Shias, I chose to hide my identity as a Shia Muslim from my class. If my students ever asked me what ‘type’ of Muslim I was, I never felt the need to tell them that I was Shia. I merely insisted that I was just a Muslim – but they were never satisfied with that answer (a reflection of the state of affairs we live in). It was not because I was scared of their reaction but because, as a teacher you always have to think of the wider implications of every decision you make.

However, this did not stop the students from sharing what they had been taught to think of the global Shia community.

“Sir, aren’t Shias the ones who cut themselves?”

“Shias have some weird beliefs, sir.”

During lessons, whenever the topic of Shia Islam came up, I heard all the regular comments and misconceptions I was already used to hearing. Even though I always corrected them – without revealing that I belonged to the very group they were making these comments about – this led to little change. And while I found this experience very amusing (lesson number one = don’t take comments by your students personally if you are a teacher – you will not survive), I was disturbed at the same time.

I did not blame these students for having such views, because they were only repeating what they had been taught. My concern was with the sources from where they were getting this misinformation from.

However, ignoring all these things, I continued to concentrate on my teaching and, all praise to God, my reputation amongst my students and peers soon began to rise, and I generally felt well-received by my class. I tried to show my faith through my conduct and manners rather than labelling myself under some umbrella term, and it eventually paid off.

Fast-forward to September 2014, and I was (somehow) appointed as head of RE at my school and I was now in-charge of the curriculum, results, teaching and progress of every student who studied RE as well as the staff members who taught this subject. This, coupled with the spiritual boost I received from my visit to Karbala that year during Arbaeen, made me feel more confident about my faith and helped me in gradually displaying my religious beliefs more openly to my students and colleagues alike.

I started praying with my hands down, wearing a ring and wristbands with the names of Imam Ali (RA) and Imam Hussain (RA) written on them – which led to many questions – and started taking days off on Ashura and the likes, when the rest of the school’s Muslims would come in regularly.

Furthermore, when students asked me whether I was Sunni or Shia, I would give a straight answer, which often led to amusing responses.

“You know what sir? For a Shia… you’re not too bad”

After telling them about my faith, I would ask them,

“Has that changed your opinion of me?”

And fortunately, with almost every student, the response has been a negative. This helped them to realise that one needs to respect all people, irrespective of belief systems.

It was the best decision I ever made. The students began to admire me even more and realised that I was the same person – regardless of whether they knew I was Shia or not. This then, naturally, allowed me to answer questions more directly (of which there were many) and made it easier for me to remove the misconceptions they had. My experience is summed up by a comment two 16-year-old girls made to me a few weeks ago:

“Sir, we’re not going to lie. We have heard some crazy things about Shia Muslims but you have made us realise how normal you are and how many of those things we were told wrong.”

With the position I am in, I have now included the Shia perspective in all parts of the school’s RE curriculum. This discusses Islam holistically – be it Islamic history (we teach about how the Sunni-Shia split happened and Ashura), theology (the concept of the 12 Imams and Ahlulbayt), ethics (Ijtihad and the institution of Ayatollahs), architecture (the shrines of the Ahlulbayt), literature (the Psalms of Islam and The Treatise of Rights by Imam Zainul Abideen) and media (both Ahlulbayt and Safeer TV). The reaction to these topics have been incredible – the students (whether Muslim or not) have had a genuine fascination for learning this side of Islam that they have never come across before.

This has led to a level of tolerance in the school that I have never seen before.

Yes, it is a little selfish of me to add this to the curriculum, and many would say that I should focus on Islam generally and not go in the sectarian divide, but we live in a world where the words ‘Sunni’ and ‘Shia’ are used so much – in the media and by the people around us – that the young people have become susceptible to negative ideas. They need to know exactly what the difference between Shias and Sunnis is, and not make one the devil and the other, the saint. It is only through the understanding of each other’s beliefs that we can strive for true unity.

Shia Muslims are being killed because of misconceptions. I am in a position where I can remove these misconceptions at an early age and where young people can learn about the authentic teachings of different world-views, so that when they leave this school, they leave with religious literacy. Not every religious class has to be one-sided.

I do not want the readers of this article to think I am some sort of a Shiite preacher at my workplace. This is the way I approach all subjects I teach. Along with removing ‘Shiaphobia’, my curriculum also aims at removing Islamophobia in general, anti-Semitism and all other forms of prejudice and discrimination towards people of faith or non-faith.

As a Muslim RE teacher in a school where the majority of pupils are Muslim, I regard it my duty to remove all hints of intolerance. And today, I am treated as an unofficial Islamic scholar. Muslim students ask me questions about Sunni Islam and other sects whereas non-Muslim students ask me about Islam and other religions. They do not care that a Shia Muslim is answering their questions. They now embrace it. And it is important that these children have a place to get answers to their questions, and if I am able to provide a fraction of what they need, I do not regret my decision one bit. They deserve it and so does Islam.

This post originally appeared on The Muslim Vibe here.