Why is the shipment of bio-hazardous anthrax being overlooked, United States? 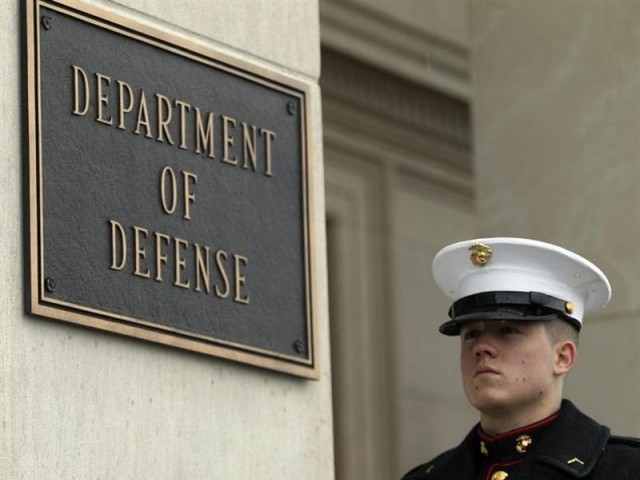 A U.S. Marine at the Pentagon in Washington PHOTO: REUTERS

While we were still in the process of recovering from the dumbfounding FIFA fiasco and the horrendous IRS hacking, the odiously toxic news of live samples of anthrax being  shipped ‘mistakenly’ by the Department of Defence (DoD) to different parts of the country and South Korea further contaminated the airwaves.

While one cannot stay away from crying bloody murder when such an incident, a rather unforgiving event, occurs, bringing back awful memories of Union Carbide and Chernobyl, Pentagon officials assured people that nothing earth-shaking took place and there were no reports of exposure to the deadly bacteria.

“There is no known risk to the general public, and there are no suspected or confirmed cases of anthrax infection in potentially exposed lab workers,” said a Pentagon spokesman.

“The DoD lab was working as part of a DoD effort to develop a field-based test to identify biological threats in the environment,” the spokesman went on.

We do know that 22 folks have been hospitalised at the Osan base, though it is unclear if they were exposed or not. Additionally, four lab technicians, right here in the US state of Maryland, have received medical attention as well.

Anthrax has made a comeback to mainstream news. Back in 2001, soon after 9/11, five Americans lost their lives on account of anthrax-related bioterrorism. The irony of the current incident is that no one knew about the live anthrax sitting in various facilities until just a few days ago. Twenty-two shipments were sent out from Dugway Proving Ground, Utah in March of last year to nine US states in addition to Osan via Federal Express. Yes, Federal Express, a publicly owned business entity that ships millions of packages everyday across the globe and hence may have gotten its containers contaminated while carrying this live anthrax.

The US Center for Disease Control and Prevention (CDC) has been involved in the investigation of the issue. So far it has kept mum with not even a statement of assurance from their side. We haven’t heard much else from any other source. Obviously if the news gains momentum and captures the sound-bytes, we may hear some panic bells ringing in the coming few days and weeks. This seems a bit unlikely with all the media attention focused on the death and destruction taking place in Texas and its adjacent states.

The Republican-run Congress may or may not be interested in conducting an inquiry since it hasn’t been in a mood to do anything constructive for eons now. They may feel compelled though, to condemn poor President Barack Obama for the incident or simply blame Hillary Clinton for her bio-hazardous politics since she seems to be responsible for all of America’s past, present and future woes.

It remains to be seen if the officials responsible for shipping the anthrax in question at the Utah facility will be taken to task. No high hopes there unless a mass scale catastrophe takes place. While saying anything against the military, just like in Pakistan, is a no-go area, quite unlike Pakistan, the justice system is still quite alive and kicking.

Whereas the Dugway incident could simply be attributed to human error, it is hard to imagine how in the world such a fatal error could be committed. It obviously goes to show that even the greatest of checks and balances cannot establish watertight mechanisms, and no system is perfect.

Ironic as it may sound, years ago ABC NEWS carried out a project that showed the fallaciousness and fragility of the safeguards put in place by the US security network. That was a sarcasm-laden, hands-down mockery of those minding our borders. Doubts are often expressed about how rickety and old-fashioned the US governmental procedures are but it’s all an open-ended debate. I wouldn’t go there for the moment since that is a whole different creature to talk about.

Having said that, some sarcastic critics are questioning the fact that why is it okay for the US to experiment on weaponising but Iraq gets destroyed for material that they didn’t even have?

A diehard, ‘bitter nut’ at our local post office went on to say that,

“Maybe we finally have explanation for the 2001 anthrax mailing.”

I didn’t consider his argument more than a splash and dash of conspiracy mongering.

Things happen and while I’d have wished Dennis Rodman to personally deliver anthrax to the North Korean presidential palace, it is just too sad that it was FedExed to a tried and tested ally. Come on Dugway, you guys could have done a better job!

I have a feeling that this anthrax episode will pass just like many other issues that although, are not trivial in nature, but do not impact our lives so much so that our functionality is jeopardised slash paralysed. The accident was part of routine training aimed at better understanding and detecting anthrax as a weapon. Though highly unfortunate that it ended up in a cataclysmic mistake, it may linger on the peripheries of the news headlines for the next few days, tickle a few minds and eventually die down.

One is sorry for those who might end up suffering grievously because of this fatal mishap, but that’s the cost one has to be ready to bear when working in danger zones where fatalities are an imminent possibility. This is just like the Republicans not letting go of the Benghazi tragedy. We all know that the US ambassador who was killed that day knew the consequences of signing up for serving in such an ‘uncontrolled’ part of the world. One has got to learn to let go and move on.

Beyond the realm of should have, would have and could have that we are listening to all around about the anthrax story, I’m sure, going forward, lots of stricter checks will be implemented as far as dealing with bio-hazardous material is concerned. It’s a challenge to the military establishment, the Pentagon and the DoD to tighten the screws, prepare better and ensure that nothing is allowed to slide and no one escapes responsibility.

In any event, these days watching the news for even five minutes can drive anyone to insanity. There’s way too much going on – murders, suicides, guys making pipe bombs, brainwashed kids going to faraway lands volunteering for ISIS and now anthrax. I think we all need to sit back, turn off our devices and try to find the entrance to the sanctuary and inner peace that undoubtedly lives within us.