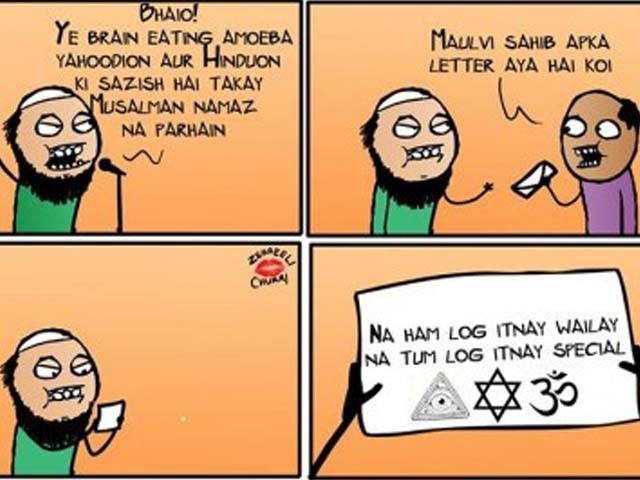 We get so emotional about a drawing that we are willing to destroy our own city, kill our own people and any outsider who comes in our way. It doesn’t matter if he or she had nothing to do with those comics. PHOTO: ZEHREELI CHUMMI FACEBOOK PAGE.

There is one thing that all Pakistanis know about themselves – they can’t stand cartoons or comics. No, I’m not talking about the meek, biscuit or washing detergent company sponsored comics; I’m talking about those that question our beliefs, provoke our preconceived notions about religion, and reveal the corrupt system and politicians.

We get so emotional about a drawing that we are willing to destroy our own city, kill our own people and any outsider who comes in our way. It doesn’t matter if he or she had nothing to do with those comics.

We got in touch with one of those local comic-making shaitaans (devils) for you. They operate under the name of Zehreeli Chummi (poisonous kiss) on Facebook and have 23,000 fans on their page.

Let’s see what the creator had to say about drawing controversial comics, the Pakistani sensitivity, and the future of this awesome page.

We started out as Karway Laddu (bitter sweets) about two or three years ago. Karway Laddu was a collaborative effort of seven comic artists. We were already running well-established social media pages and we decided to start a dark humour project. We had to take down Karway Laddu because my reckless ways were becoming a threat for the others involved in the project. Eventually, everyone left. I took over and started Zehreeli Chummi as a solo project.

We go to gym so we can work out, make our bodies strong and maybe take a punch or two, but what have we done to take a joke? I realised this nation needs an anger management class. We have to understand that the world will keep on making fun of us if we keep acting out. We have to realise that we can ignore these poorly drawn cartoons; they have no power over us.

Insults are not worse than injuries and if you think otherwise, you’re inflicting pain on yourself. You’re not letting go. Most of the times I’m not trying to offend people, I’m just making comics to offend my own self.

What kind of subjects do you like to cover in your comics?

For about two or three years now. Sometimes I post about 10 comics a day and sometimes I don’t post anything for weeks.

Anyone who can take a joke or an insult.

Who designs the comics? Who comes up with the concept? How many people are involved?

I usually come up with the ideas on my own but every now and then I’ve had someone else’s help. Sometimes I just find something funny in the comments section and after notifying the person I make a comic out of it. I try to be very careful in giving out credits where someone deserves them.

Considering the sensitivity of our people, what kind of rabid responses have you received so far?

Have you thought of coming out openly with the name of the creator?

I’m always itching to come out; in fact, I leave traces behind for people to follow. Nothing is more frustrating for an artist than staying anonymous. But I’d rather be safe than sorry.

Is anything off limits when it comes to the content?

When we started the Karway Laddu project, we had an understanding that we’re not going to talk about religion and politics but that’s the first thing I did. I made sure there’s nothing that’s off limits. The whole idea is that people can and will joke about anything they want, we may as well learn to deal with it.

You’ve already gained a huge following, what are your next plans for Karway Laddu?

I’d love to do something like South Park. Perhaps start making animated shorts.

Can majority of Pakistanis handle satire?

As long as it’s not about their own principles and beliefs, then yes. But there are a significant number of people who can handle almost anything and that’s the kind of Pakistan I’m striving for.

Your content contains a lot of profanities; can’t the message go across without them?

There are several reasons why I use profanity in my comics. It’s not just my way of sticking up my middle finger to censorship; it also plays a subtle role in keeping the audience in check. People who are worried about moralities wouldn’t touch our comics with a 10-feet pole and it’s a good thing. It not just teaches them to ignore us, but it also keeps us off the radar.

I also like experimenting around with profanities. For example, I have noticed people would rather rant about a subtle profanity than actually ponder about the big issue we’re talking about. This distorted sense of morality disturbs me.

How do you deal with the haters?

We practice absolute freedom of speech on this page. No one gets banned for anything, not even for aiming personal attacks on the administrators or getting on our nerves.