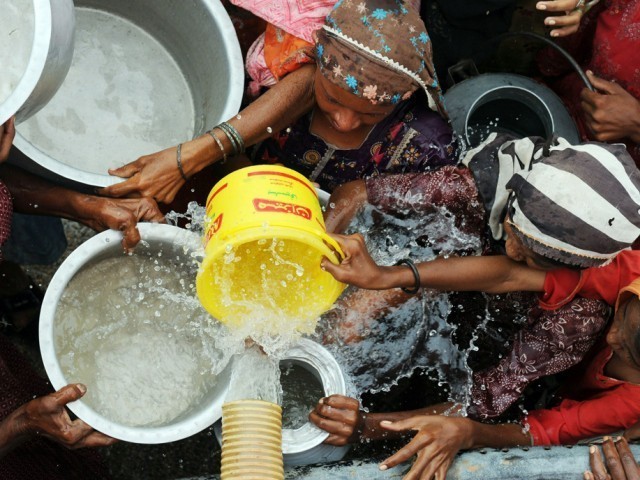 44% of Pakistani people have no access to clean, usable water resources. PHOTO: AFP

Annually, 250 million people face water-related healthcare issues all over the world and amongst them, 20 million succumb to their illnesses. Pakistan ranks at number 80 among 122 nations in the index of provision of hygienic drinking water – which means 44% of Pakistani people have no access to clean, usable water resources.

This should make a lot of people lose their sleep at night, especially the powers that be – however, it doesn’t seem to be the case right now.

We have failed to provide a great proportion of our people with safe drinking water. And the people who do have that privilege have stopped getting their supply of clean water due to reservoir shortages. The recent shortage in Karachi is a case in point.

Karachiites have been facing a constant, and unnerving, shortage of water in many areas of the city, and a lot of people – those who can afford it, anyway – have resorted to employing the services of water tankers at their homes to get some respite. This has led to strengthening of the water-tanker mafia, which is ripping off thousands of rupees per visit from every household.

For me, the irony is that Karachi is just a few kilometres away from the Arabian Sea – yet its citizens are deprived of such a basic commodity. Why is that? Not because the water from the sea is unusable. It’s because our authorities and lawmakers are too inept and too careless to install even a single portable water facility in Karachi.

But the incompetence of our authorities has been at play for a very long time. Even before this crisis, the water that Karachiites used to get from the Karachi Water and Sewerage Board (KWSB) was too contaminated for drinking or washing. This is because most of the water pipelines have either outlived their lives or were not laid down following proper SOPs initially. Either way, most of the pipelines have leakages and are mostly placed side by side with the sewerage system – where chances of contamination are pretty high.

However, one cannot just blame KWSB for this conundrum. This situation is everyone’s responsibility. If we see how Karachi has been governed in the last decade, we will have some answers as to why the city is on the verge of an infrastructural collapse.

In recent years, especially after 2008, we have seen Karachi’s political economy get plunged into shambles and uncertainty; at the same time, there have been prominent development projects sprouting in Lahore and other parts of Pakistan. One wonders if there is a correlation between these incidents. Karachi has largely fallen prey to people whose major main is territorial power. They have not done anything to build Karachi for the better. This city’s stakeholders had enough time to pull out mega projects, create better infrastructure and create employment opportunities – yet their only focus has been on fixing roads, shutting down the city and asking for a quota in provincial and government jobs. But mega projects like mass train transit program, food security, local policing, mega healthcare facilities and the likes have not been the primary focus of this city’s policymakers.

Our political parties don’t have any institute or think-tanks which can work on social issues and plan future strategies. We don’t have even a single party in Pakistan which has been able to draft comprehensive internal policies – policies that aim towards the betterment of the common man, that aim towards development, that focus on creating a more hospitable city. Mostly, federal and local governments have been dictated by those who actually wear the pants in this country. And it has been most unfortunate.

Many say that the water shortage in Karachi has been because of the absence of local bodies. But this notion could not have been further from reality. The issue is not administrative in nature. It needs to be tackled as a national problem. Today it’s Karachi; tomorrow it will be half of Pakistan. And why is this? Because fresh-water levels, globally, have been going down and we are doing absolutely nothing to establish water reservoirs. This water shortage is getting worse day-by-day and even if our local government finds a way to curb it temporarily, we cannot depend on ad hoc systems that have no credibility and that can backfire anytime.

With new residential schemes cropping up in every major area of the city, this issue will further deteriorate and the water scarcity will become lethal. Karachi gets its major water supplies from the west and from District Malir, and right now, both these districts have massive residential projects being developed.

How will they manage water distribution after the development of these on-going new residential schemes? Karachi’s current water reservoirs rely entirely on rain water; therefore, it is not a surprise that they are getting barren and empty. Every year, we hear the same excuses from the authorities, that because of scarce rainfall, the reservoirs have run dry.

But my question is, this is the 21st century, should we still have such backward methods to save water resources? Why can’t be we build reservoirs that can desalinate the seas water and make it usable for the populous? Over the last 10 years, climate change has been highlighted as a prominent reality; why are we not accepting it and moving on from our archaic practises?

While certain clerics have taken upon themselves to dub this shortage as a wrath from God, because of Karachiites’ wrong-doings, I feel that as one of the most educated cities in the country, we need to look for other, more concrete causes for this shortage, instead of just blaming it on celestial powers.

Also, when there is so little infrastructure to sustain the need of water in the metropolitan, why are all these new residential projects being granted permission to get established? How can we supply water to new residential schemes when most of the old areas and kutchi abadies don’t have proper water supply?

Karachi is dubbed as the epicentre of economic activities in Pakistan, yet its citizens are still deprived of this natural resource which forms the basis of life. There is an immediate need for mega water projects in Karachi, before the situation gets out of control and it turns into a civil conflict.