Understanding rape through the Game of Thrones 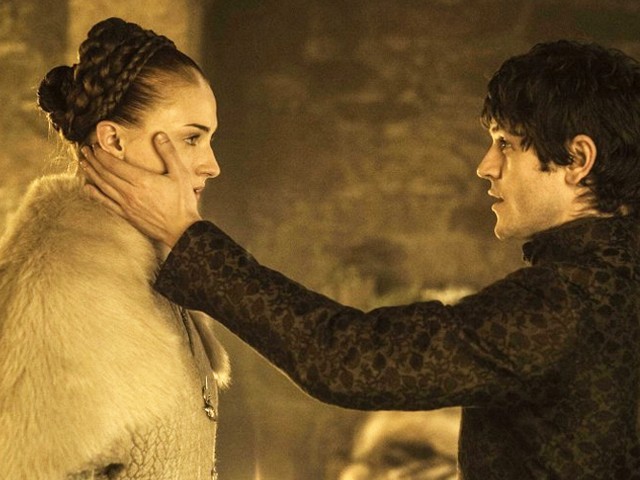 In the scene, Sansa Stark is raped by the sadistic psychopath Ramsey Bolton, while Theon Greyjoy is invited to watch. PHOTO: HBO

Warning: For those of you, who have yet to watch the new season of Game of Thrones, be prepared for spoilers. Or stop reading.

I’ve been following the controversy about the Game of Thrones rape scene, which troubled a lot of women when it was aired this past Sunday. In the scene, Sansa Stark is raped by the sadistic psychopath Ramsey Bolton, while Theon Greyjoy is invited to watch. You don’t see Sansa or Ramsey, but you hear everything, while the camera focuses on Theon as he weeps. This, women have said, is unacceptable. Rape should not be used as a plot point. It’s gratuitous. What’s the point? Where’s the trigger warning? An American Congresswoman, Claire McCaskill, said that she would no longer watch the show because this scene’s violence was too much for her to take.

My first reaction was one of scorn. I live in Pakistan, where we see cases of gang rape, child rape, child marriage, forced marriage, and marital rape all the time. There’s horrific abuse, with acid thrown on women’s faces, women beaten and killed for “disobedience,” women punished for honour crimes. Nothing that happens on Game of Thrones could shock me as much as what I’ve seen in real life. The rape of Sansa was, as a friend put it on my Facebook page,

“A hard image for a soft world.”

Not only this, but in many parts of the world I live in, the underdeveloped, poverty-stricken, religious-strife-torn, countries of the Middle East, the subcontinent, and Africa, women who are raped must marry their rapist so that he can avoid jail time.

During the 1980s in Pakistan, if a woman was raped, she was jailed for having committed “adultery”. There was a famous case of a blind woman who was raped and she went to jail because she couldn’t identify her attackers. We had Mukhtar Mai gang-raped as punishment for a so-called affair between her brother and a woman from a rival tribe. Women have been stripped and made to walk down village streets naked as a way of punishing their male relatives.

Still, what about the idea that Game of Thrones promotes gratuitous sexual violence, or that rape scenes should be avoided in television or film?

First of all, in general, I’m not opposed to rape represented in any kind of art, as long as it has artistic merit, doesn’t glorify the act, and presents a realistic view of the trauma it unleashes on the victim and family. Others are dismissive of the show, and the scene in particular, calling it a “waste of time”.

One in four women is raped in this world. If you aren’t a survivor or don’t know one, you’re very lucky that you can afford to have that attitude. Most of us cannot. And for a rape survivor or victim, a sensitive portrayal of rape and its aftermath can bring a lot of healing and relief. Take for example, “The Accused” which was based on a true story; it built solidarity and empathy for rape victims, it showed that what a woman wore or how she behaved didn’t mean she deserved to be raped, and even affected the men who watched the movie (and men also get raped, as the shower scene in American History X shows – another very hard-hitting scene which portrayed the reality of male on male sexual violence in prisons).

But does Game of Thrones really have too much gratuitous sexual violence?

There’s a lot of gratuitous sexual violence in GoT in general: Joffery killing a prostitute with a crossbow, for example; prostitutes getting beaten up when they arrest the Septon in the current season is an another example. In season one, they also rewrote the wedding night scene between Daenerys and Khal Drogo into a marital rape which was gratuitous, as in the book the scene was consensual and sensual (I’ve read all the arguments about canon vs non canon in GoT but I don’t know if I care much about that, I’m not such a purist). Speaking up about the soft-porn quality of these scenes and objecting to them on the grounds that they fetishize or glamourize rape is an argument I can certainly agree with.

However, when the Dothraki sacked various cities and raped the women, that didn’t seem pornographic, just ugly and real. Yet women have always been raped when any city’s been sacked or invaded. And showing Daenerys stopping the rapes seemed a pretty feminist statement to me. As another friend wrote on my Facebook page,

“If people think the rape in GoT is chauvinist, isn’t that the point? Despite the fantasy elements, it is based on medieval European history. A history that is rife with powerful men taking advantage of women and using rape as a tool and instrument of control.”

For many of us around the world who watch Game of Thrones, that isn’t history. That’s real life, happening every day. In Syria, in Nigeria, in Afghanistan, in Iraq, it takes place in the context of war. For the rest of us, it’s woven into the fabric of our everyday lives.

There are allusions to Sansa’s rape as far back as season three, when the Hound rescues her from being raped by common folk at Kings Landing. Also there’s the scene when Brienne is almost raped by her captors and Jaime talks them out of it. In these particular scenes, it’s not the male gaze or chauvinism that’s the issue; it’s the issue of morality in male characters who were previously seen as amoral or uncaring.

Perhaps the real problem in Game of Thrones is that there’s rape that happens to nameless women that we don’t care about, and then there’s rape that happens to characters we do care about. And the difference between the two types of rape is uncomfortable for us, because it reflects how we feel about rape when it happens to people near us or like us (a white, rich lady like Sansa) or people unlike us and far away from us (unnamed prostitutes, village women, women from far away countries and lands that we already think are barbaric).

As for “rape as plot device” well, why not? If murder is a plot device, or marriage, or any other event, rape can be too. I would say the portrayal of rape in Game of Thrones has been quite varied, with some of them more troublesome than others. I just find it odd that Sansa’s rape is the straw that broke the camel’s back, and some of it strikes me as very privileged complaining by people who don’t live in patriarchal, underdeveloped nations where rape is used not as a plot device but as a very real way of subjugating women.