What are you trying to prove by denying Geelani a passport, India? 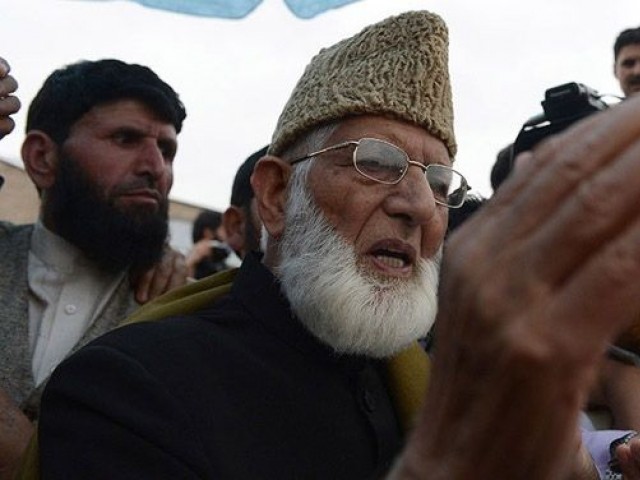 This was done on Kashmir’s octogenarian resistance leader Syed Ali Shah Geelani’s request for a passport, as he wanted to visit his ailing daughter, Farhat Jabeen Geelani, in Saudi Arabia.

Did Gandhi, Savarkar and Bose visit European countries as Indian citizens and on Indian passports?

Did they surrender their political ideology and abandon their struggle for freedom in exchange of receiving their travel documents?

Geelani applied for a passport through his son and this has sparked a fresh political row in restive Kashmir.

A simple case of issuing a passport to Geelani has now snowballed into a major political controversy due to the coalition government mishandling the issue. The spat was handled especially badly by the People’s Democratic Party (PDP) whose leaders speak a language of convenience to address domestic audiences on their home turf in Kashmir, and end up surrendering meekly before the Bharatiya Janata Party (BJP) and the Rashtriya Swayamsevak Sang (RSS) in New Delhi.

The PDP and the BJP, two coalition partners in Jammu and Kashmir, have serious differences over whether Geelani should or should not get his passport. In 2007, 2008 and 2011, Geelani had been granted a restricted passport.

Khalid Jehangir, BJP’s spokesperson in the Kashmir valley, thought of himself as Kashmir’s regional passport officer or CID chief and ended up issuing a bizarre statement on the issue.

“How can he (Geelani) apply for a passport unless he accepts that he is an Indian citizen and owes allegiance to the constitution of India? Geelani should apologise for the mistakes he has committed during the last 25 years.”

On the other hand, PDP’s President Mehbooba Mufti told media persons that,

“(She) would see to it that Geelani gets his passport.”

She insists that this should be treated as a ‘humanitarian issue’.

“You have to treat this issue on compassionate grounds. A father wants to see his ailing daughter, who can’t visit Kashmir at the moment. From my perspective, a daughter deserves to see her father. India is a country where blood relations are respected and perhaps the only country in the world where festivals like ‘Raksha Bandhan’ and ‘Bhai Duj’, etcetera are celebrated to show love and affection towards your close relatives,” Ms Mufti told journalists.

The Indian federal government stepped in as well and stated that it will consider Geelani’s passport application once he undergoes the required formalities. A report mentioned that Geelani has to go for biometrics, but the Hurriyat leader said he continues to remain under house-arrest and is not allowed to step out of his house.

“I will not go for biometrics till my detention ends,” said Geelani.

The police in Jammu and Kashmir have said that they offered their vehicle to Geelani to go to the passport office for his biometrics, but there are conflicting reports regarding this.

All said and done, it is not only about issuing or not issuing a passport to Geelani. He is a revered and followed political leader and there will be many to bat for his rights. But the systemic rot is deeper and has a wider context attached to it.

According to a report in 2007, there are about 60,000 families (400,000 persons) who were ‘security indexed’ (read blacklisted) for the issuance of passports in the Kashmir valley alone. In some cases, even distant relatives of slain militants were denied passports on fragile grounds. Security agencies in Indian-administered Jammu and Kashmir are often accused of creating unnecessary hurdles in giving clearance for passports of close relatives and friends of ex-militants, resistance leaders, and political workers.

It appears that there exists a state policy to kill dissent in Kashmir and suppress proponents of a certain political ideology. Denial of passports has been used as a suppressing tool to bring a section of people, espousing a certain ideology, into submission. There are weapons to kill and maim people, but the world is yet to produce a weapon to kill political aspirations.

Such undemocratic denials also bring home the point as to how the credibility of various state-run institutions in Jammu and Kashmir has eroded over the past several decades.

Political theatre around the issuance of passports to ordinary individuals or political leaders is not only undermining the integrity of the institutions in Jammu and Kashmir, but also exposing petty politicking of the dim-witted PDP.

All tall claims made by the PDP before coming to power about adopting the so-called policy of ‘battle of ideas’ seem hollow now. Promises to give democratic space to different viewpoints have not been kept, creating an atmosphere of peace and tranquillity to hear dissenting voices remains a distant dream, and bringing about a positive change on the ground through democratic behaviour seems a reverie.

Earlier, PDP took credit for releasing the young resistance leader, Masarat Alam Bhat, but then succumbed under BJP’s pressure to re-arrest him on flimsy ground that Alam raised pro-Pakistan slogans. Chanting pro-Pakistan slogans is a stark reality in Jammu and Kashmir since the very birth of Pakistan in 1947.

If the PDP takes or retracts its decisions only because of what the BJP may or may not think is only being interpreted as the party’s meek surrender before the Hindu nationalist party. The PDP is earning a bad reputation for its rollback policy.

Previously, the PDP leaders would ridicule the former Chief Minister Omar Abdullah for his rollbacks, but the three-month old PDP-led government has already done as many rollbacks as Abdullah did during his six-year (mis)rule and (mis)governance.

Is choking the democratic space further in the Kashmir valley, burying its own ‘battle of idea’ theory, Alam’s re-arrest under pressure, no forward movement on draconian laws of the Armed Forces Special Powers Act (AFSPA), and denying a passport to Geelani an example of PDP’s surrender before the right-wing BJP and their masters based in Nagpur?

By denying Geelani a passport, the Indian and Jammu and Kashmir governments have also made a confession of sorts that Geelani and his tens and thousands of followers in the Himalayan region are not Indian citizens, and that should serve as good news for individuals who follow Geelani’s political ideology.

Chief Minister Mufti Mohammad Sayeed, before and after assuming the chair, made it clear that the Hurriyat Conference has a viewpoint which needs to be heard and given space to. Now he seems to have forgotten his own words. No wonder the coalition government in Jammu and Kashmir is drawing a lot of flak over its mishandling of many issues over Alam’s re-arrest to the recruitment policy to Geelani’s passport issue.

It seems as if the PDP is quite content for now, which brings to mind the role of ‘Circuit’ played by Arshad Warsi in the movie ‘Munna Bhai MBBS’. Warsi played second fiddle to the lead actor, Sanjay Dutt, and did not do anything without Dutt’s approval and refused to use his own mind. In the BJP-PDP coalition government, PDP appears to have been assigned Warsi’s role.

Meanwhile, the unholy alliance of BJP-PDP may still survive a full six-year term, but PDP appears to be preparing ground for its political suicide and no-noise burial afterwards.