Children’s Day: They belong in schools, not factories 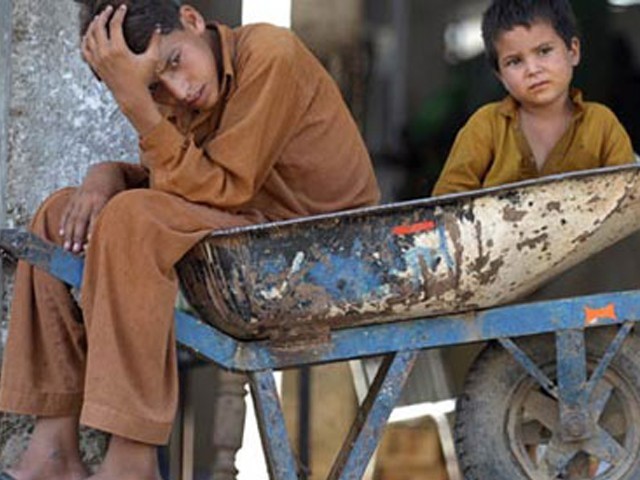 Pakistani boys sitting in a wheelbarrow wait for customers at a food market in Islamabad. PHOTO: AFP

As John F Kennedy once said,

“Children are the world’s most valuable resource and its best hope for the future”.

This quote perhaps sums up not only the importance of children, but also the need to turn them into such individuals that our future may be secured, because it seems that the extinction of freedom and humanity is impending. It is hence up to us to understand the dynamics of life and help not only ourselves but our children as well in order to work towards a better life.

Unfortunately, amidst all this inhumanity and barbarity prevalent in society, days like Children’s Day have been forgotten, and even though we are living in the 21st century, there are still children working in garages and factories instead of rightfully studying at school or playing with toys.

We have people using satire to bash liberals who say madrassas are nothing but evil, citing and condemning the mastermind behind the Safoora Chowrangi attack and Sabeen Mahmud’s murder – the IBA graduate – and people who have been publically standing up against the basic idea of religion and tarnishing its image.

We constantly witness an on-going war between the liberals and the conservatives of our country, but at the end, none of them will do what is needed to improve the situation. They will surely debate, argue, fight, bash, cry, and scream but then the drama will be over. They will think they have done their part and leave the rest to chance. This phenomenon which exists in the Pakistani society is nothing but an unfortunate show of disbelief in oneself and hypocrisy.

“We shouldn’t, and it’s wrong, but we can’t treat everyone equally. Some are better off while some are not. On the face, no one would disagree with the need of social equality; it’s not something that one can do. I mean why would someone treat the rich and poor equally despite his obligation to?”

At first I was infuriated, enraged and absolutely confused upon hearing this statement from a cousin but then his argument went from being a very inhumane set of words to a bitter reality.

We speak about how we need to be kind and humane, we tweet about the right to get a proper education and we cry on Facebook against the incidents of child abuse that take place in Peshawar, but at the end, when it comes to ourselves, many of us are privately, without a doubt, committing the crime we scream against in public.

For those of us who are not a part of this crime, they will stay silent like the latter, even upon witnessing incidents of child labour. Between the liberals of defence in Lahore, the cosmopolitan people of Islamabad and the ultra-conservative Muslims of Peshawar; there is not a single place where child labour is not prevalent and yet none of us take any steps to eradicate it.

We keep 10-year-old children as servants, 12-year-old girls as caretakers of our children, but that to us is not a crime. Why? Because we are doing it ourselves.

Despite our opposition to the cause, we still support the idea of social inequality and social stratification. We do, despite our own disapproval, use children as servants.

We have developed a morally corrupt idea which revolves around the idea that poor people do not deserve the privileges we do. Most feudal leaders and landlords of our country believe that education is not something that can change the mind-set of poor people; hence they just don’t deserve it.

We have not yet reached the age of maturity which is required to give out the scent of equality. There is no essence of humanity, there only exists the odour of hypocrisy. The few people who do however try to wipe out this smell with their essence, either end up dead while trying to teach in Swat or are betrayed by none but their own partners in their noble conquest.

A recent trend has emerged in our society, which has forced many to support the idea of social stratification. Yes, there’s a stark difference between a criminal and an NGO worker, but what is the fault of their children? Be it the child of a criminal mastermind or the child of a well-settled businessman, they all deserve a fair and equal chance at life.

Yes, life is not fair, but isn’t trying to grant opportunities worth a try?

Will we not try for the sake of the young children of our country, who are molested, raped, murdered, beaten, scolded, abused and kept away from enlightenment?

Recently, UNICEF criticised Pakistan for not having rules which were strict enough to protect children from abuse and harassment. According to the first ever report on the state of children in Pakistan by the United Nations, the country’s laws do not conform to its treaty obligations under the United Nations Convention on the Rights of children, to which Islamabad is a signatory.

The fact that little attempt has been made by the government during the 21st century is proof of the incompetency of our government in regards to securing the rights of our children. One of the most disgustingly hypocritical things is that many of our so called feudal ‘protectors of children’ are themselves using children on their lands for labour intensive tasks.

Our leaders are unaware, or choose to purposefully ignore any acts passed for child welfare. Our government blatantly lies to our faces about being concerned about the future of Pakistan, when in reality half of our senate and National Assembly members themselves violate child labour laws.

Pakistan ranks sixth amongst the top 10 countries in the child labour index and 18% of our workforce are children. We need to bring a revolutionary change in this sector of humanity. We need to at least secure the rights of young children who may be a potential asset for our very own nation in the future. We need deeds not words and the deeds are us trying to help out the younger generations.

We speak against many things in particular, but the topic on child labour remains elusive.

How can you play your part in ending this social ill?

If you see a person involved in any such activity, please call the police and report these incidents, so the perpetrators do not go unpunished. Please do not get your car get fixed by a 10-year-old or get your house cleaned by a 12-year-old girl. For the sake of Pakistan, try to change the future of a child so we may find the next Albert Einstein or Margaret Thatcher in them.