Is Pakistan a failing state? 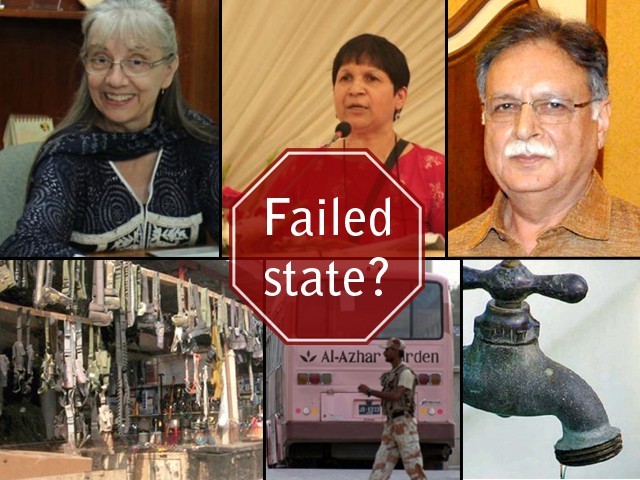 They have infiltrated our institutions, our schools and colleges, our universities, our police departments, our armed forces and perhaps even our judiciary.

More than 45 people are shot dead in cold blood by six or eight armed men, who reached the spot on motorcycles. At practically every traffic signal in Karachi, one can see armed policemen stopping motorcyclists, checking the vehicles’ papers and letting them go after extorting some money.

Yet on the day of the mass killing, no one stopped the killers, while the police station nearby was nearly empty.

Isn’t this a glaring sign of failure of the state?

Dr Bernadette Dean, who had been living in the country for many years and was advising the provincial government on revision of syllabi, received death threats from a religious party. She left Pakistan but was too scared to name the said religious political party. We are all aware that in Karachi there is only one particular party deeply worried about teaching our children subjects which will train them to think and question, yet newspapers also dared not name it.

In which other country would such a situation be tolerated?

And you think Pakistan is not a failing state?

In Lahore, a cleric in a madrassa accuses a federal minister of blasphemy because the latter said seminaries produce illiterate students. Government takes no action against the cleric. Students of another seminary in Islamabad are caught installing banners calling for the hanging of the federal minister. When police intervene, they beat up the cops. The students are chased and their madrassa is identified.

Again, no action will be taken against those running that madrassa.

Is this how governments in civilised countries react?

The federal finance minister says his government is helpless and cannot take any action against smugglers and those selling smuggled goods in Bara markets.

What kind of government is this?

Do you want more evidence that Pakistan is a failing state?

Senior police officers are being routinely killed, while those policemen who are not ghost employees are guarding the ministers and parliamentarians. There is no development in the city, so one wonders what they do with all our tax money. The whole city is without water for days because government departments have been filled with political appointees who will never be held accountable for their negligence.

And yet you refuse to realise that we are living in a failing state?

A very rich person pays only Rs26 as income tax, his 20-billion dollar IT company fails to file returns for two years, and the tax hounds do nothing. However, if a common man fails to file a return even though he is earning just enough to barely stay alive, the income tax department springs into action and threatens to auction his house. It will be a miracle if the rich man is given adequate punishment; most people believe he will be let off after a long investigation. Some believe that he is innocent, others that his company is being victimised by business rivals, that it is a conspiracy against the country.

Is this how citizens of a successful state respond in such a situation?

A graduate from a prestigious institution turns into an extremist after going on four-month long evangelical tours organised by an ostensibly peaceful group. Others arrested along with him have also, allegedly, been indulging in terrorism for many years. The police, however, were not even aware of their existence until now, after several murders and killings – including the one of 47 people in a bus.

No one will ask the police why they did nothing for all these years, despite the murders of a foreign female principal and several other people. The killer of a provincial governor is garlanded by lawyers who give him the status of a hero.

Not a failed state? Think again!

It’s time to wake up. They have infiltrated our institutions, our schools and colleges, our universities, our police departments, our armed forces and perhaps even our judiciary. They have dedicated themselves to our destruction, and the only way to prevent them is to raise our voices and urge our leaders to do more to fight extremism in the country leading to terrorism.

But of course, first we have to discard our conspiracy theories and admit that our country is failing and is in great danger of disintegration.