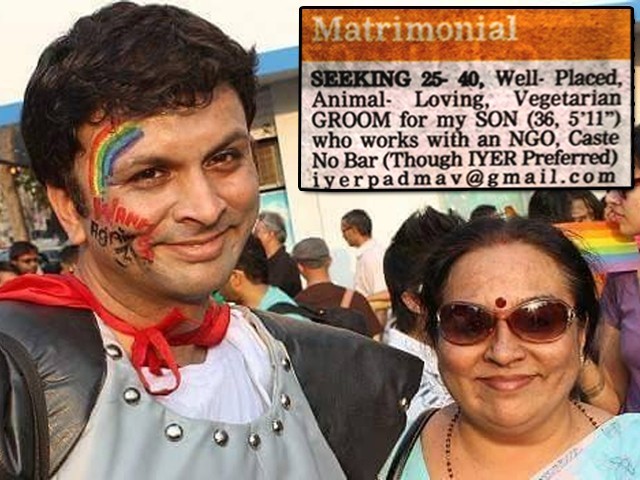 Harish Iyer’s mother, Padma Iyer, became growingly concerned that her son would not be able to find a spouse. PHOTO: HARISH IYER/BUZZFEED

Most concerned Indian parents worry about their child’s happiness and would like to see her/him live a happy and fulfilled life, and being married is traditionally considered part of that equation of fulfilment.

The search begins to find the correct partner, by word of mouth and other avenues. One method includes placing a newspaper matrimonial advertisement in a local or national newspaper to draw upon the eyes of many potential suitors and their families for marriage. Once the ad is placed, the phones begin to ring and emails are exchanged, all leading to a potential match.

Everybody is happy! Yay!

However, for one such person, 36-year-old Harish Iyer, a Mumbai-based LGBT activist, this simple act became a complex one. Iyer’s mother, Padma Iyer, became growingly concerned that her son would not be able to find a spouse.

“‘You don’t have a boyfriend, you’re not so young’. She was concerned for her ageing son like any Indian mum would be, irrespective of whether he is homosexual or heterosexual,” Harish said.

Padma Iyer sought to place a matrimonial ad in the Indian paper, ‘DNA’, which read:

However, to no avail. The ad was rejected on grounds that it was illegal. The mother and son team followed up with The Times of India, who seemed excited initially and began the process. But later, Iyer received a call from the publication explaining that it has been rejected on legal grounds.

They also tried The Hindustan Times but were met with a similar fate.

The last publication Iyer approached was the local Mumbai-based tabloid newspaper, Mid-Day, who agreed to print the advertisement.

Sachin Kalbag, executive editor of the Mid-Day, said there had never been any question of not publishing it.

“Normally, if there is a problem with an ad, then the department will come to me. It raised no eyebrows at all. We are pro-equal rights and have been running vociferous campaigns against discrimination on the grounds of sexual orientation.”

This was the first matrimonial advertisement for a same-sex partner in India, where homosexuality is illegal. Homosexuality was in effect re-criminalised in 2013 in a decision by the Supreme Court that stunned campaigners and led to international criticism. LGBT activists say gay people face significant discrimination and police harassment, even if prosecutions for same-sex activity have been rare.

LGBT activists say that though much prejudice remains in India, there is increasing support for their cause. Almost a dozen people attended India’s first gay pride march in Kolkata in 1999, but now thousands congregate there annually while similar marches have sprung up in other metropolitan cities like Mumbai as well. Nascent LGBT film festivals and university campus groups have also slowly emerged.

“Historically, Indians have always had marriages arranged by parents or relatives as the preferred way of getting hitched. There has been an outpouring of support for the gay community but there remains a huge conservative community too, which is a majority and is unwilling to accept gays,” Kalbag noted.

The campaign for LGBT rights continues to face stiff opposition from religious groups who claim that homosexuality is ‘against Indian culture’. Many of the groups continue to rally vehemently against such people like Iyer and do not make the lives of LGBT people any easier.

“It was an innocent attempt by a mother to find a partner for her son. She did what any other would have done. I do not understand the controversy over this advertisement,” said Iyer.

I agree with Iyer – what is the big deal? What is this controversy? When there are countries such as Luxemburg whose prime minister, Xavier Bettel, recently married his same-sex partner, Guathier Destenay, or even the United States where now 36 states  have legalised same-sex marriages, why is there a problem with current day India? If persons such as Nobel Laureate Amartya Sen, acclaimed writer Vikram Seth, and Hindu guru Sri Sri Ravi Shankar are fully espousing LGBT rights, why oppose it? In fact, Shankar in a series of tweets indicated that,

Homosexuality has never been considered a crime in Hindu culture. In fact, Lord Ayyappa was born of Hari-Hara (Vishnu & Shiva). #Sec377

Nobody should face discrimination because of their sexual preferences. To be branded a criminal for this is absurd.

I do not agree with the idea that India is truly, at its core, accepting of LGBT people like they are for heterosexual people, not right now at least. The reality is that there are many closeted and open LGBT people, including myself as a transgender woman, but why deny us? Are we going to pretend that LGBT people do not exist or remove them entirely from existence?