Is Pakistan capable of protecting its minorities? 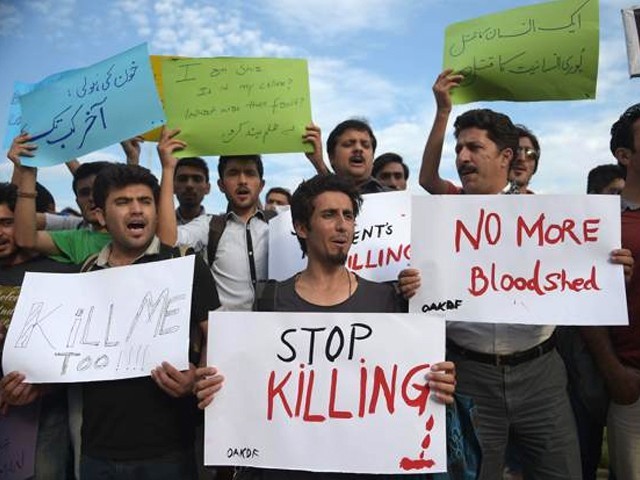 Pakistani civil society activists carry placards as they shout slogans during a protest against the killing of the Shiite Ismaili minority. PHOTO: AFP

The recent attack on the Ismaili Muslims in Karachi brought a lot of things into perspective. Firstly, it exposed the ineffectiveness of various military, rangers and police operations, and, secondly, it unveiled the dangers our minority communities are exposed to.

But seeing this attack in isolation would not be of any help. We need to understand how religion has facilitated the state and, by extension, the militant organisations over the past decades and how it has led to the conundrum that we find ourselves in now.

The first time Islam came to serve the government was in 1953, for Mumtaz Daultana, which led to the victimisation of Ahmadis. After this, while almost every government took religion’s aid to stay in power, it was during Ziaul Haq’s era that the scope of religion was extended as an agent to fight the American war against Russia. This step essentially led to the establishment of the first international religious jihadi organisation, the Haqqani Network – according to Stanford University.

And the number of jihadi organisations has grown rapidly since then.

According to the South Asian Terrorism Portal, currently in Pakistan, there are 48 domestic, national and transnational militant jihadi organisations operating. This alone shows how fertile the country has become for religious organisations that have devoted themselves to eradicating ‘lesser Muslims’ – like the Twelver Shias, the Bohri Shias, Ismailis, Ahmadis and the Barelvi Muslims.

Countries across the globe chalk out cohesive and well-planned strategies to eradicate radicalisation of any orientation. However, in Pakistan, it is the opposite; here, the state has been reduced to issuing mere condemnations after every brutal killing. And, similarly, it has no power whatsoever to conduct operations against those extremist elements with which it shares cordial relations and considers as ‘strategic assets’. The terms ‘good Taliban’ and ‘bad Taliban’ are a manifestation of this unrealistic approach. The state has adopted a dualistic approach here. It sponsors extremist organisations and also condemns the killings of innocent citizens by those very organisations.

While it is not to say that India might not be involved in training actors who could disrupt peace in Pakistan, it is the state’s responsibility to ensure the security of minorities from all of its enemies. The ordinary man is least concerned about who carries the attack out; their sole worry is about their own security – a primary right which the state has failed to give them.

Ismailis have been targeted previously as well – in Chitral, Gilgit.

In Chitral, many Ismailis were killed during Zia’s regime and Ismaili jamatkhanas (worship places) were set on fire during the same period. A number of Ismailis, who have been killed individually, have never been reported on mainstream media. In Karachi, the Ismaili jamatkhanas have been attacked previously and many Ismailis have fled Karachi due to security reasons from Garden and adjoining areas.

In 2014, the Tehreek-e-Taliban Pakistan (TTP) released a 50-minute long audio message threatening Ismailis to stop their work as they were supposedly “promoting western culture” in Pakistan.

After the Karachi incident, the media in Pakistan stopped mentioning the words ‘Ismaili Muslims’; instead, it carefully adopted the words ‘Ismaili community’ – the Urdu newspapers used the word ‘Ismaili bradari’ – to refer to the minority. The news analysis projected the philanthropic work of Ismailis and their imam, and asked the government to protect “a community that is economically contributing for the betterment of the country”.

One wonders if “contributing economically” is the reason for the state to protect its citizens or is it the nature of the social contract that a citizen has with the state under which the government is solely responsible for the protection of its citizens. That still needs to be answered.

States do not protect minorities because they contribute towards the betterment of the economy, health, education, or art; they do so because they are citizens of the state.

Coming from an Ismaili background, it was interesting to note that many prominent news anchors and journalists have literally no knowledge of Ismaili history. The Ismailis were mentioned as Aga Khanis in each report, which is not the religious identity of Ismailis. Aga Khan is an honour title bestowed on Hasan Ali Shah, the 46th imam of Nizari Ismailis, by Persian King Fath-Ali Shah Qajar.

It was funny to note one journalist asking naively why Ismailis were being killed as they were neither Sunnis nor Shias. Such is our understanding of various Islamic sects. Moreover, in almost all newspaper reports, the attack was not condemned as an attack against an Islamic sect – it was condemned because the “Ismailis were peaceful people”. This sums up very well how informative and free our media is.

The attack on Ismailis, and other minority groups in Pakistan, is a result of the failed Afghan-jihad policy of the state. And unfortunately, the state has no interest in learning from its past mistakes as it still debates in its parliament about the Yemen issue and seems enthusiastic to fight another war despite having lost 50,000 of its citizens. In the meantime, militant organisations are mobilising masses to protect the Harmain Sharaifin at the cost of their lives.

Pointing all fingers towards RAW and India is giving safe passage to the extremists who are subverting peace of the country and are brutally killing members of minority communities. The state has zero interest in dealing with these militant organisations. This attitude of the state must send a clear message to minorities that their killings will continue in the near and distant future.

Some people will light up vigils, some TV channels will air talk-shows, and some newspapers will highlight their ‘peaceful attitude’ and their ‘great services’ for the nation. But no one will try to discuss the real problem, and in turn, its solution.

(We had only one desire,

We don’t have any other desire).

The minorities in Pakistan had and have only one desire – the right to live freely as a citizen of the state. But does the state have the same desire?

The author has done his MS in government and public policy from National Defence University. He is a social activist, hailing from Gilgit Baltistan and currently studying at Aga Khan University, London

Gilgit-Baltistan elections: The nth nail in the coffin of women equality