Russia: The one country the US cannot bully 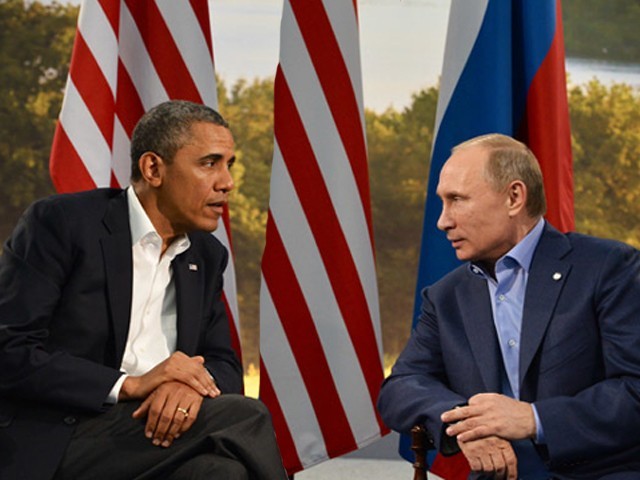 This week US Foreign Secretary John Kerry met Russian Foreign Minister Sergei Lavrov as well as Russian President Vladimir Putin at the Russian Black Sea resort, Sochi – the same place where the Winter Olympics took place, which the West boycotted – for the first talks since the beginning of the Ukrainian crisis back in the autumn of 2013.

Kerry held discussions for more than four hours with Lavrov before he sat down with President Putin. Among the topics discussed were the themes which the US cannot handle without support from Russia, i.e. the Iran nuclear talks and the situation in Yemen and Libya. But apart from these topics, for the first time since the beginning of the Ukrainian crisis, Secretary Kerry openly admitted that any solution in this matter would have to be a political one based on the Minsk Agreement.

More surprisingly, he cautioned his Ukrainian allies and Ukrainian President Viktor Poroshenko personally for the first time, who had threatened to retake the Donetsk Airport whatever the cost, just before the meeting and stated that this would be a violation of the Minsk agreement, something which would not be tolerated.

What does this meeting tells us?

It tells us that it took the US and their Western allies one and a half years to realise that Russia is a power not to be bullied and starved into submission. All the sanctions that have been launched especially in the economic sector did result in hardships for the population, but they did nothing to turn them against their president.

If at all, the Russians stand more united today behind President Putin than before the crisis. Just remember the impressive parade of millions of Russians in what was called ‘immortal regiments’ in various Russian cities.

Secondly, the sanctions did not result in the isolation of Russia; rather, it resulted in Western goods losing out in the Russian market shares and other countries’ producers taking advantage of the opportunity to sell in Russia. For Russia, the whole crisis has brought a strengthening of the realisation that it needs to look east instead of west, in terms of economic benefits as well as political. Their alliance with China has become stronger than ever before, which was visible during the Victory Parade at the Red Square in Moscow on May 9th, when Chinese soldiers marched together with Russian units and others from the former Soviet republics.

That was a first.

Thirdly, it seems the US had to learn its lesson. It is already unable to tackle international crises single-handedly but it needs Russian help, especially with powers with whom Russia has long-standing friendly cooperative relations such as Iran and Syria.

President Barack Obama has made the Iranian nuclear agreement the central matter of his foreign policy achievement due to which he is meeting stiff resistance from the Republican side as well as within his own party. Negotiations with Iran have to be successful if he doesn’t want to lose face, which is why he had to send his foreign secretary to soften stands in the conflict with Russia.

And by the way, nobody talks about Crimea anymore.

Last but not least, the US and its western allies have realised that before getting into the issue of sanctions with a country, one should think about how to get out of them without losing face when they turn out to be counterproductive. That is happening right in front of us with the G8 meeting that has now become a G7, minus Russia, due to the various sanctions, and now the bigwigs seem lost trying to figure out how to get Russia back in, because without Russia, a lot of matters cannot be decided usefully.

The cold shoulder given by Saudi Arabia, UAE and Oman to the Camp David Summit called by President Obama also reflects which way the wind is blowing in the Gulf and Middle East, as well as the concerns these countries have, even though the US is trying to assure them with meaningful support to the extent of engaging military force in case of any threat from Iran.

The Arab countries are sceptical because the readiness of the US to put boots on the ground has recently diminished quite a bit. Apprehensions are arising due to certain news circulating around. The news is that India is contemplating operating the Iranian port of Chabahar to probably facilitate transportation of oil, gas and other items from Central Asian Republics to the US, for which India built a state-of-the-art all weather road in 2007-08, spending over a billion dollars. The route stretches from Delaram in Afghanistan, reaching up to the Iranian border town of Zaranj.

India has been assured that US will relax sanctions against Iran on the import of certain items based on Indian requirements needed to operate and equip the Iranian port as a modern deep sea port with a 900 kilometre long new railway line connecting Chabahar up to the Afghan province of Bamiyan in order to transport iron ore to Indian steel mills.

After 10 years of use, the entire infrastructure will become Iranian state property, which appears to be a master stroke of diplomacy by India to forestall the Kashgar-Gwadar Economic Corridor before its inception, which leaves China fighting against being left behind in the creation of the new world order of things in the region where Iran will be again given the policing role to protect US interests.

With double standards, the US stand exposed; on one hand, they are assuring their Gulf Cooperation Council (GCC) partners of the future defence in case of any threat from Iran or IS, while at the same time they are using India to protect US national interests by negotiating terms in order to develop and operate the Chabahar deep sea port.

On the side lines of these developments, Kerry has announced discussions with China on his forthcoming tour over the issue of escalating tensions over the South China Sea; an issue raised by Philippines and Vietnam.

They both have started overlapping claims to the area and are trying to gain support for free navigation and aviation movement in the South China Sea. China has already warned the US not to take ‘risky provocative actions’ by over-magnifying Philippines claims, since these islands – which were reclaimed and developed by China in order to provide humanitarian help to rudderless boats during typhoon seasons – are a part of China since ages and therefore, are legitimate Chinese projects with peaceful motives.

Hence it would be in the interest of regional peace if the US avoids jumping in to create differences between the peaceful neighbours of the South China Sea. They should rather play their due role in stopping the forced exodus of Muslim Rohingyas from Burma.

The last one and a half years of the second round of a Cold War between Russia and the West has reflected upon several things. First, the Cold War which had started against the Soviet Union after World War II, the West had been able to keep it up for about 40 years, up until the communist system collapsed and the Soviet Union disintegrated. Yet, Russia survived and is recovering and emerging as an important international player due to US misadventures.

Second, the new Cold War lasted for less than two years until the West realised that Russia is not to be intimidated and isolated, and all they achieved was the new Eurasian alliance strengthening and a policy of Détente appears to be working between US, Russia and China on vital issues so far.

After Iraq, Pakistan is the biggest eyesore for the India-Israel-US nexus we have been witnessing for quite some time. The lesson to be learnt from this is that world power relations have shifted irrevocably and the sooner this is acknowledged the better it will be.

This provides as food for thought for Pakistani foreign policy makers, as was declared by one of our founding fathers, Liaquat Ali Khan, during his first ever state visit to US. Alas, his successors have continued to compromise on our national interests to feed their own selfish personal interests first.

God bless humanity and give wisdom to understand and the courage to take bold decisions against our rulers.