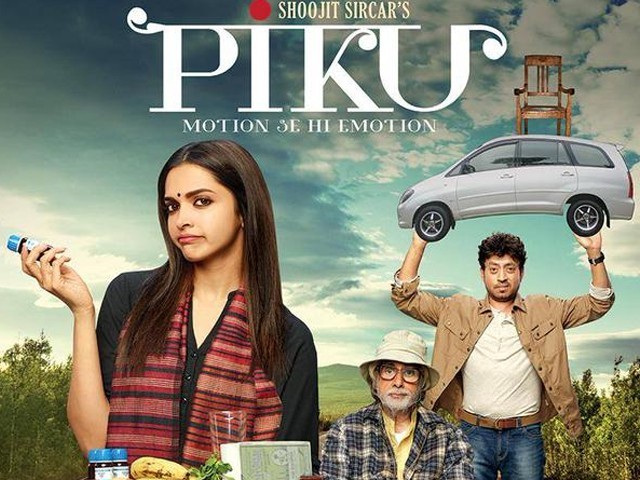 It is an informal, witty, and emotional anecdote about the convoluted rapport between an educated daughter and her inflexible elderly father.

It is an informal, witty and emotional anecdote about the convoluted rapport between an educated daughter and her inflexible elderly father. The movie focuses on daily tribulations in a cheerful and carefree manner which effortlessly speaks to the audience.

Directed by Shoojit Sircar, the movie relates the story of a 70-year-old retired Bengali man, Bhashkor Banerjee (Amitabh Bachchan), who lives in Delhi with his daughter, a working woman, Piku Banerjee (Deepika Padukone).

Piku is seen as always trying her best to look after her widowed and hypochondriac father who has unidentified age-related health issues, including constipation. The small Banerjee family discuss bowel movements during their breakfast or dinner time with such ease that it seems like they are talking about extremely serious issues. Bhashkor is seen updating Piku about his frustrating toilet experiences during her office hours.

In these circumstances, Piku gets awfully irritated with her father’s persistent self-indulgent and odd behaviour. Though a self-reliant career woman, she is still waiting for his permission to get married.

On the other hand, Bhashkor has always admired career-oriented women who choose to remain unmarried throughout their lives. He considers married women as creatures with low levels of IQ. In fact, he dislikes the idea of his daughter getting married and shedding her own identity.

During an outlandish road trip from Delhi to Kolkata, grumpy Bhashkor’s non-stop complaints and short-tempered Piku’s crankiness with a reluctant driver, Rana Chaudhary (Irrfan Khan), paints the strange lives of a freaky father and a caring daughter.

The road trip and their eccentricity keep the audience mesmerised for the rest of the plot.

Sircar’s Piku does not require a romantic Bollywood set-up, sensational scenes and meddling songs and dances. Instead, it’s an endearing story with an emotional stance about the deep attachment of a father–daughter bond – all presented in a very subtle manner with lots of scatological wit.

The basic reason why I felt Piku is relevant is because of its strong and moving theme. In many households, families have stubborn ageing elders who are dominating, yet they provide a warm and loving atmosphere for the entire family.

People, and especially single daughters, who cope with Bhashkor-style fathers or parents and their irksome tantrums is something which a lot of individuals can relate to – it is a reflection of reality. It would be easy to identify oneself with Piku or Bhaskhor.

Sircar and screen writer Juhi Chaturvedi, who previously enticed moviegoers with Vicky Donor in 2012, once again picked a common story and proved that a wacky, avant-garde subject can perform well at the box office and garner praise from critics.

Padukone and Khan have shown remarkable acting skills by turning their respective characters into congenial and factual figures. Both are idiosyncratic and tuned in with their own thoughts. However, they do not allow those idiosyncrasies to engulf them.

Arguably, it is the wonderful Big B who steals the show. The ways in which he portrays himself as an unremorsefully selfish, bad-tempered old man and delivers his witty lines with cynical looks is a sign of his commendable acting skills. He is entirely convincing with his wide-eyed innocence and the tone and expressions of Big B are extremely memorable.

Piku is a plain and simple movie. But despite its simplicity, it manages to keep the audience engrossed and entertained for two hours. There are no larger-than-life characters, dramatic arts or a happy-ever-after ending, yet the movie is like a much-needed breath of fresh air. Nevertheless, it is magical because of the humorous and quaint remarks by the characters, further supporting their insular stereotypes. The story delivers a significant message about old age, something which we all can learn from.

I would definitely recommend all moviegoers to watch this movie. I assure you that the emotional and insightful script, as well as the memorable performances by Khan, Padukone and Bachchan will keep you captivated throughout.