Bombay Velvet is all style and no substance 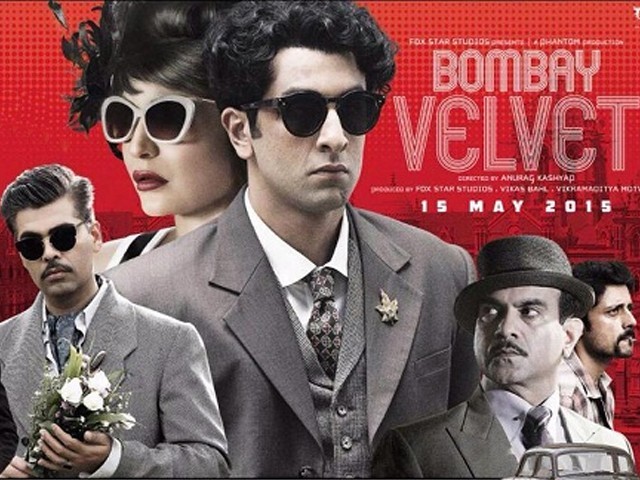 The failed accent of a street thug and those horrible curls Ranbir Kapoor sports do him no justice. PHOTO: BOMBAY VELVET FACEBOOK PAGE

Bombay Velvet is a noir crime drama set during the 50s-60s era. It is directed by Anurag Kashyap, the man behind movies which have evolved into cult classics, such as Gangs of Wasseypur, Ugly, Dev D and Black Friday.

Bombay Velvet’s protagonist is Johnny Balraj (Ranbir Kapoor), an ambitious street hustler-cum-boxer, fighting in the pits for the adrenaline rush. The major part of the movie pivots around the rise and fall of Balraj, from the obscure mediocrity of street hustling to becoming a manager of the most happening club in town, of course known as Bombay Velvet.

How he traverses that journey should be seen by the audience themselves.

Rosie (Anushka Sharma) is an inspiring singer with a tumultuous and disturbed upbringing from Goa seeking refuge in Bombay. She does so in order to seek a glorious career but rather finds herself embroiled in gritty and unforgiving realities and gets restricted to becoming a mistress, during which the paths of Balraj and Rosie align and they fall madly in love with each other. However, Rosie has something up her sleeves, a hidden agenda which should not be divulged for the sake of keeping all sorts of spoilers at bay.

Playing the role of an antagonist is the director-turned-actor Karan Johar as Kaizad Khambatta, a shrewd, conniving and suave businessman-cum-criminal, coupled with questionable sexual orientation and effeminate sensibilities. I guess it’s just me, but after watching several episodes of Koffee with Karan, he just does not come off as villain-esque; he tries so hard but fails spectacularly, and as a result, he looks more like a henchman than a full-fledged villain.

It is sad and disappointing in equal measures to note the fact that Bombay Velvet has faltered to a great extent in terms of delivering a quality movie-going experience. Suffice to say that it has imploded under the high expectation audiences had from this particular movie and I feel it failed to deliver.

However, what this movie has in abundance is style, panache and a befitting representation of the biggest metropolis of India during the 50-60s. Ranging from the look and feel of the movie as a whole, to dresses, cars, and even depicting Bombay in all of its moralistically flawed and vice but beguiling magnificence, which is a far cry from the high rise corporate Mumbai of today.

One thing that stays apparent throughout the entirety of the movie is the inspiration, or you can say homage, paid to different Hollywood movies, be it Goodfellas, The Great Gatsby or the popular HBO drama series, Boardwalk Empire. It is glaringly obvious to the point of being emulated at some instances.

One would hope and think that Mr Kashyap would recreate a visceral and bourgeoning city, like he did in his previous works such as Gangs of Wasseypur, one which is raw and exposes the wild underbelly beneath the glitz and glamour of the city, but he has failed and only managed to exhibit the glamour and chic.

At times, it is out rightly evident that the movie is all style and no substance, so much so that it starts to become a hollow affair, devoid of a structured story. Speaking of story and movie, it stretches longer than necessary, two and a half hours or so, the pace is uneven, coupled with failed attempts at humour and dialogues which are instantly forgettable.

The music, on the other hand, is upbeat and melodious, paying tribute to the music of the 60s, especially with songs like Fifi. All in all, the songs are a stark opposite in comparison to the movie and they stand out as one of the few good things in Bombay Velvet. The music composer has done a good job interlining the plot of the movie within the lyrics of different songs.

In terms of acting skills, Kapoor fails to deliver a commanding performance; he shines in a few scenes, but during the rest of the movie, he is at best run-of-the-mill and average. One just cannot see him as a crass street thug no matter how hard he tries to don the character of Johnny Balraj. The failed accent of a street thug and those horrible curls he sports do him no justice.

Sharma has not put forth her A-game either; only God knows where her depth in acting went, which was recently delivered by a potent performance in NH10. All the other actors, such as Kay Kay Menon, are passable in their limited roles.

To sum it all up, this is Kashyap’s failed transition from the independent movies to big mainstream Bollywood movies. Bombay Velvet is a movie which can only be tolerated once and that too with some patience involved. Watch it only for the spectacular period setting, the sets and the fancy wardrobes shown throughout the movie.  Bombay Velvet is like a malignant tumour which becomes inoperable by the second half of the movie.

Simply put, avoiding it at all cost will be the best option. I would rate it 0.5 out of 10.