Is the Zimbabwe tour more important than our minorities? 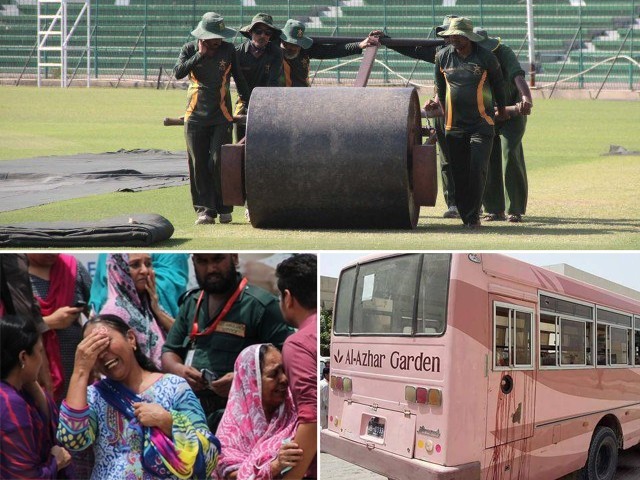 The amount we are literally about to waste on a series that may as well end any further chances of cricket in Pakistan is horrendously unreal.

The Zimbabwean cricket team will be arriving in Pakistan tomorrow night. After much confusion and shaky decision-making, the team will finally play cricket in Pakistan. This is the first Test team to visit Pakistan after six years.

The security arrangements for the team entail a fleet of policemen protecting them at all times. Alongside this, 4000 special officers, 30 snipers and four patrol vehicles will keep an eye during the five-match series whilst four security check posts will be made at the main Gulberg entrance.

I, like any other cricket fanatic, am ecstatic and charged for the historic event but the guilt of having failed my countrymen again and again tears down any enthusiasm that may have developed. The blatant genocide of 45 Ismailis made headlines a few days ago. We saw spilled blood, flags at half-mast, teary eyes, corpses of 17-year-olds at the morgue, agonising pain and a promise to not let a similar event happen again. Adults stood shocked, children sat confused but there was a spark that our nation had rarely seen; a spark of humanity, brotherhood and unity. It felt almost real that the spark would ignite a fire but the spark died before it could reach the fuel.

We promised that in thick and thin, we would not let this happen again yet we have already forgotten the souls that have departed. While mothers still mourn the death of their sons and daughters, wives of their husbands, daughters of their fathers, our attention has shifted to the latest Zimbabwe tour to Pakistan, an event we have so carelessly labelled ‘historic’. We cannot promise security to our own nationals but we don’t hesitate to spend millions on that of foreign athletes. I don’t aim to discourage the development of cricket in Pakistan but neither do I support the idea of spending millions to make a team tour our homeland.

A day after the attack, a senior of mine commented,

“We will put up some statuses, change our display pictures, shed a few tears and forget about it. We will do nothing.”

I wanted to tell him that he was wrong, that we will rise and do something substantial about this tragedy. But today, my heart is no longer as optimistic. It has come to accept the bitter truth that he was right. Today, when I see people more scared about the cricket tour than for the victims of the Safoora bus incident, a voice inside my head tells me that all of this is worthless. Our preferences have become twisted and our priorities need to be revisited and changed. We have, regrettably, unfortunately and unknowingly, become a self-centred nation. We prefer our comfort over the basic necessities of others.

A place people are dying every day, we are doing all but attempting to bring change. The huge amount of money being reserved and invested on this cricket series is ironically more than the total amount of money given to the families of the victims of the attack. The amount we are literally about to waste on a series that may as well end any further chances of cricket in Pakistan is horrendously unreal. If we were to have deployed the 4,000 troops for the safety of Karachi’s minorities instead of these matches, would the massacre have taken place?

I think not, at least not of this magnitude. Have we ever seen police vehicles patrolling in such concentration for the common people? No, we have not. This goes to show the selfishness, hypocrisy and weak intent of our nation. We should not have forgotten, not so soon.

We promised to protect our nation when we saw it bleed but wasting money on a cricket series is really not the way. I understand the wave of happiness that this series may bring about for many – but it would not be so jovial for all. A crying mother, a widowed wife and an orphaned child have a lot more to care about than sports. We must reorganise our priorities, ask, urge, fight, protest and cry for change. The incompliance from Zimbabwe should not have been answered with flattery but rather blatancy.

If they are cowards, why should we risk the security of our men for barely a handful of theirs? If they are willing to tour us, they can simply do this as it normally would have happened. The same level of crime exists in Mumbai, but why is it that their hearts are not pounding as they enter that city? It is indeed hypocrisy from their side.

Like many, my heart has been devoted to cricket for years but can I let it take over the spare that is reserved for humanity? I cannot. And this is exactly what I ask of you. I accept that reviving cricket is an achievement but it is sad that this comes at the cost of spending the money of those who have bled and died in the struggle for a better Pakistan.

I had hoped that my nation would not forget but it has proved me wrong once again. If this is how we want to live, we simply cannot imagine good days – never with this level of selfishness.