Why Game of Thrones is infinitely better than Grey’s Anatomy 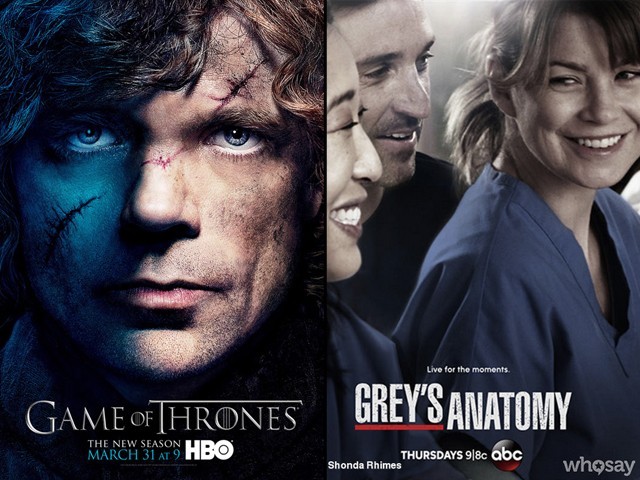 Rhimes needs to understand that there are better ways to keep a show stay alive than to kill its major characters – and that too so brutally.

This post is for all those who like to compare Game of Thrones with Grey’s Anatomy. I would like to correct such people and let them know that no matter what happens, Grey’s can never be as amazing as GOT. And here are my reasons.

Although I am no longer a fan of Grey’s, I must admit the show was one of my guilty pleasures at one point in time. Being the only brother of four older sisters, something peculiar like this was bound to happen; it could’ve been a lot worse I suppose, but oh well.

I remember the show being humorous along with the gore of weekly astonishing surgeries that had to be performed by the doctors. They have shown some really bizarre cases over the seasons, such as operating on a man who had a tree branch sticking out of his stomach or doing surgery on someone who had a bomb in their gut. However, as I grew older and watched shows like Breaking Bad, the idea of these good-looking, amazing doctors working in one hospital started coming off as somewhat superficial to me.

If anyone has been to a real hospital, they would know that normal doctors do not look like supermodels. Moreover, a trainee-doctor begging an amazing neurologist to “choose me; love me” in long monologues is completely impractical in a hospital environment. There is no subtlety or authenticity in the show. I stopped watching it after Izzie Stevens pulled the plug on her boyfriend/patient in an attempt to save him, and have only been following it when something big happens, like when Sandra Oh left the show or when Meredith almost died while giving birth.

In the meantime, I indulged myself in shows such as The Sopranos, Mad Men, The Wire and Breaking Bad and I have realised that watching them was a very good decision. These series have amazing stories of common people going through daily life – be it in the streets of Baltimore or on the roads of New Jersey. These shows are a lot more relatable than Grey’s.

But the best of all is Game of Thrones, which is based on the book Songs of Ice and Fire by George R R Martin. This series is the depiction of every guy’s dream show, as it has dragons, war, death, brilliantly strong characters, blood and zombies all in one. It is one of the most expensive shows on television right now, with each episode costing HBO hundreds of thousands of dollars. However, its following is so massive that the cost is covered almost immediately, as soon as an episode hits the markets.

It is also the most brutal show that I have ever followed, where some of the incidents have left me dumb-founded. Main characters die in almost each season, thus it has taught me to not have a favourite character as he/she will probably end up dying in the next episode. However, GOT fans can justify the trauma caused by the show because it leads to a better story.

The same cannot be said of Grey’s fans.

For instance, while the ‘Red Wedding’ episode had meaning, subtext and was built towards several episodes, Grey’s episode on Derek Shepherd’s death was simply berserk. Yes, the red wedding was a horrific scene to sit through, but it was justified. However, with Grey’s, it seemed like the producers enjoyed emotionally abusing their fans.

Martin has a story to follow. But what’s Shonda Rhimes’s excuse of distressing her fans like this?

While at first I wasn’t bothered by hearing the news of Derek’s death, after I saw the video I realised just how horrible the episode must have been for those who have been following the show since ever. It was heartless; he saves the lives of four people in an accident, goes back in his car and gets hit by a truck.

How could Rhimes have orchestrated his death so mercilessly?

Be it George O’Mailey’s death, or the shooter episode when Derek is shot and the hospital is taken hostage, or the plan crash which resulted in Lexie Grey and Mark Sloan’s death, none of the episodes have been as traumatising and as utterly useless as this one. The show could have very well gone on without these tragedies.

And do you know the one thing that’s common in between all of these shows (including the one on Derek’s death)? They were all exclusively written by Rhimes herself. This goes to show how twisted Rhimes’s view of her series is.

Rhimes needs to understand that there are better ways to keep a show alive than to kill its major characters – and that too so brutally. She needs to learn from Martin and understand the art of syncing death with the plot’s progression and making her show stand on its storyline – not just mindless drama.

As of right now, Game of Thrones is infinitely better than Grey’s Anatomy, and I do not see this scenario changing anytime soon.

A BBA student at the Institute of Business Management. Working hard towards his dream of one day owning a chocolate factory.