Dear Ziaul Haq, we are paying the price for your decisions today 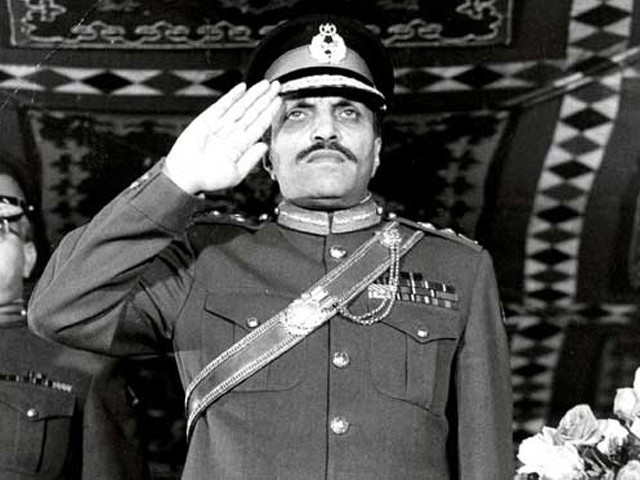 It has been almost 27 years since your death. The flesh and dismantled bones placed in your grave would have turned to dust by now. Many governments were formed since your death. Many dictators have ruled us after you. Your rival’s daughter embraced shahadat (martyrdom) – as they say.

A war even broke out in our neighbourhood. Can you guess who the predator was and who the target? That smile on your face will quickly disappear when I inform you that I am not talking about Saudi Arabia invading India. I am referring to America invading Afghanistan. Yes sir, the same Afghanistan that was once the ally of America.

We are wholeheartedly paying the price for the decisions you made for the betterment of my beloved nation, Mr Mard-e-Haq.

The seed of extremism, commonly known as your Islamisation process, is turned into a lush tree with its branches spread over several acres. Many people of your nation tried to uproot the seedling and many are trying to cut it down now, but their efforts bore no fruit. I know what you are thinking – they cannot cut it down no matter how hard they try. Despite having the latest technology and advancement in weapons, they are unable to uproot your own creation.

I remember a young fellow once inquiring why the leaves of your tree are not green and have a deep crimson shade present in them. I told him to keep quiet and never to question anything that is done for the benefit of our national interest. I also asked him to read his history textbook and to learn it by heart. It is more sacred than truth and more relaxing than a cup of hot chai.

You would feel good to know that we are still going through the process of ridding your country from the ethnic differences, cultural rituals, art, intellectuals and from everyone who dares to open his tied-up tongue; cleaning it with the thin red liquor present in every mortal’s body. Every child that opens his eyes in this nation is familiar with the sounds of a bomb blast and rifle shots. He also recognises the faint odour of the infidel’s blood and his words instantly.

Your dear friend Saudi Arabia is helping us clean our roots. The mujahideen in your pack and the Americans produced are working their hearts out to make this part of Earth the ‘Land of Pure’ again. But sir, I am very sorry to inform you that there are still some people who support music and promote books and art. Though those brainless people don’t listen to anyone, your friends have asked them to quit their sinful acts time and time again.

I can see that you are getting sad. Don’t worry, sir. I told you, we are on the road of washing away the stains of our society. We will cut them from the root soon.

Be it the murder of Sabeen and Waheedur Rehman, be it the Army Public School or people persecuted for the blasphemy law, be it the Tehreek-e-Taliban Pakistan or its many off-shoots, be it the Peshawar church attack or the attack on Ismailis in Karachi, be it the multiple bomb blasts on Shia imambargahs all over the country or the innocent blood spilled due to terrorism, at some level, we owe all of this to you and your ideologies.

There is only one request that I want to make: please don’t haunt my country anymore. We already have enough problems. The kids get scared when they see your shattered soul roaming around. Your soul will get tired of wandering around and gazing at the same vista of gore and tears everywhere. So take rest in your grave and leave the dirty work to your friends.

Wounded to the core,

An amateur painter and writer who believes that art, in all its forms, can revolutionize our society. She tweets @Kainat_Azhar94