Six questions to ask after the #SafooraBusAttack 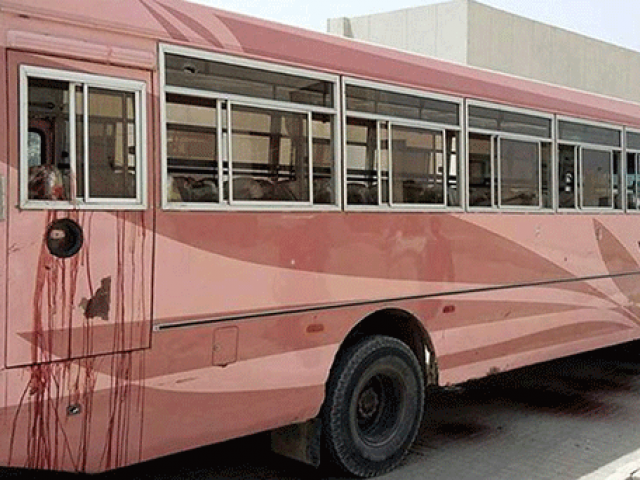 We demand justice and immediate apprehension of the perpetrators. PHOTO: INP

A couple of days ago, Karachi witnessed an unprecedented act of barbarism when a bus full of Ismailis – one of the most peaceful community in Pakistan – was targeted and shot at, resulting in the deaths of 45 people, with numerous injured.

My heart goes out to the victims and their families in their difficult time.

As soon as the attack took place, commiserations, condolences and compensations began to pour in from all over the country. However, I feel that it is useless now to even listen to what our leaders have to say, since they repeat the same message that they had rehearsed in a previous attack. Their words are virtually the same – baseless, unsubstantial.

Perhaps the only exception to this is the chief of army staff, General Raheel Sharif, who is seen giving due diligence to the incident by postponing his visit to Sri Lanka and flying to Karachi. Perhaps he knows that our shameless political leadership is nothing but a bunch of impotent and incompetent candidates elected only to overburden the exchequer.

Following the headlines, news and an amateurish analysis with my friend, I am left mulling over the following questions:

Is it just to break exclusive news stories? The reporting by our media personnel was pathetic, uncouth and bordered on creating hysteria amongst the masses. Do they have no other purpose except to increase their channel’s ratings?

Why do they need to play such tragic music in the background and show footages in slow motion? Do they find pride in trying to make a mockery out of genuine human emotions? Do our media houses have no shame? Have you ever seen such a display on BBC or CNN?

In an ideal Pakistan, this would not happen. News anchors would be more sensitive towards people’s emotions and news would be just that, news, not a sequel from a Bollywood blockbuster. While this has been said a million times, I feel someone has to remind this again to the media powers that: train your journalists. Make them understand that everything is not about breaking the news the fastest. Make them learn that before they go on their news coverage spree, they should understand that they are humans first and as such they need to treat the loss of others in the same way as any human would – with empathy.

2. What is the role of our police department?

Is it just to suspend/transfer SHOs and/or DSPs whenever something this happens? Does it help in making the police department better in any way?

I feel that instead of suspending them for some face-saving, they should first be probed into by their higher-ups. And it is only after preliminary enquiry that such a suspension be issued so as to not make a mockery of the role of this department. Presently, it appears as if suspension only saves them. We have countless examples from the past of good-for-nothing suspensions.

In an ideal Pakistan, the police system would not only be efficient in protecting its citizen, it would also be able to initiate a comprehensive inquiry.

3. Why wasn’t helped called for immediately?

The whole incident must have taken at least three to five minutes; you do not have to be an FBI agent to figure out that this is enough time for someone to call for help.

I assume there would have been someone from the LEAs nearby the place of incident who could have apprised/alerted the department using a phone or a cordless. Although, I did not expect the police to reach the spot on time or precisely understand the whereabouts of where the carnage was being carried out but it was surely within the capabilities of the police to have taken steps that could have at least made it far more difficult for the perpetrators to flee from the scene. Did no near-by police station hear the gunshots?

Can’t you tell the direction if you hear multiple gunshots being fired? I think anyone can.

And when it comes to security providers, they are professionals, so it should be even easier for them. If you think it is useless, please be noted, a panicked criminal is more likely to leave substantial evidence/clues than the one who manages to escape without any hurdles. I would be utterly shocked if I get to learn that not even a single police mobile was patrolling in that area at the time. There has to be one as the road directly links to the main highway. Should I consider this a gross failure in deployment of our security forces at such a crucial point?

From my personal observation, I can tell you that a police mobile can be seen on snap checking underneath the bridge passing through the main highway. So why was nothing done?

4. Why are we not investing in hi-tech technology?

Or at least making it mandatory for private vehicles to have cameras and tracking devices fitted in? Imagine how easy it would be to identify criminals and even in some cases be able to tell the possible routes taken to escape the scene. There are companies which are now providing video recording cameras which can be used to see the routes taken by criminals in an event that they manage to run away.

So even if the CCTV cameras are not working or present, there is still a very good chance for security official to track down the criminals. The only thing our government needs to do is make this mandatory for bus owners – especially for public buses.

5. Have we learnt nothing from the attacks on APS, GHQ, Quetta Faisal Base and the likes?

Why are our intelligence agencies unable to ward off terrorist activities when all we hear is a post-incident statement claiming that they knew it was going to happen?

In an ideal Pakistan, this would not be a valid excuse.

6. Lastly, what criteria is there to qualify for the post of an interior minister, or a chief minister?

Also, in case if they fail to do their jobs and do not resign voluntarily, why aren’t they forced to do so? Why not terminate incompetent ministers? In case there is no provision in our constitution to terminate a minister for failing to perform his duties, there is always an option available to furnish a bill in the parliament to legislate the same. This is a need of the hour.

Pakistan doesn’t have to be ideal to undertake at least this. Accountability is of key importance for any nation to survive.

If laymen like myself and my friend could come up with these questions – and their perspective solutions as well – then why the same can’t be done by our think-tanks? Or are they too incompetent to do even that?

We demand justice and immediate apprehension of the perpetrators. May the killers rot in hell and peace prevail. Too much blood has been spilled. This needs to end now.

He is an MBA from Bahria University, Karachi, a humanitarian and a patriot.