It is time to give back to the Ismaili community 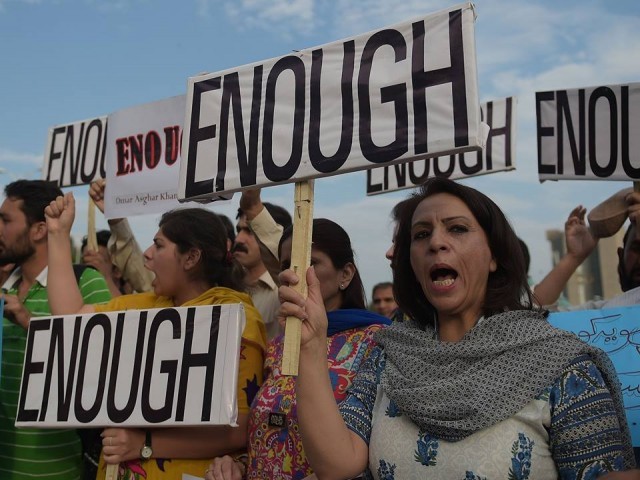 Pakistani civil society activists carry placards as they shout slogans during a protest against the killing of Ismailis. PHOTO: AFP

“If people have made mistakes, forgive their mistakes. If people have harmed you, forget and forgive. Do not hold grudges, do not turn around and say, ‘he hurt me yesterday so I will hurt him today’. This is not the spirit of Islam” – The Aga Khan IV

“I have lost friends. I don’t know how I should react. Words are not enough to define this tragedy. People who were part of our lives are no more with us but their memories will keep haunting us,” laments Shafiq*.

He is a member of the Ismaili community – a community which lost 45 of its members yesterday in a terrorist attack while they were commuting towards their work.

“I texted him after I got to know about the attack. He never replied. Saif Ali left us with a bullet in his head. I cannot believe it. He was a jolly teenager who loved to smile all the time. He was working in a jamat institution and was good in studies as well,” explains Rizwan*, who lost two of his friends in the attack.

Ismailis are one of the most peaceful, socially-responsible and disciplined communities in the whole Muslim ummah. Members of the community mainly work in education, healthcare and development sectors. They work for their society, irrespective of cast, gender, religion or region.

Ismailis have a vision to bring peace, harmony and tolerance between the citizens of the world, and they aim to do this by serving their society.

The Aga Khan IV, in his speeches, has always promoted pluralism and diversity. He wants his followers to be role models for whichever society they are in and for many regions, he has been successful in moulding his people into helpful, responsible citizens. His followers are apolitical and have contributed towards a better Pakistan in ways more than one.

Be it building a world-class hospital, or a comprehensive education system, this community has given whatever it has to this country and its people’s prosperity.

And what has Pakistan given to this community? A gift of 45 dead bodies.

The horrendous attack by some barbaric cowards has left the community in a state of mourning. The 45 people killed were all innocent men and women and they had no idea why they were being killed. The attackers allegedly fled from the crime scene without any opposition. They ended 45 lives and simply walked away, and no one even stopped them.

But such an incident is not the first of its kind.

In 2013, a bomb blast at the Karimabad jamatkhana killed four Ismaili women and children – and no one said a word. Not even a single protest was seen on the roads after it happened. Why? Because the community moved on – and so did the people. Ismailis thought of it as a test from Allah (SWT) and that He will give them justice. And everyone else, well, they did what they do best, become insensitive to other people’s pain.

This was followed by another incident, where a certain terrorist organisation threatened the Ismaili people residing in Chitral for their beliefs. And what did people do after that? Nothing. They still remained quiet.

I wonder if this attack will lead to the same results as the previous ones.

After the attack, the Chief of Army Staff, General Raheel Sharif, cancelled his visit to Sri Lanka. Several politicians condemned the attack and a day of mourning was announced. But will it make any difference now? Will the 45 people come back to life with this? Will it really stop the terrorism that is devouring people day-in and day-out?

“A youm-e-soug or Rs5 lakhs will not make us feel better. We want peace. We want security. That’s it. We will keep working for prosperity; that’s the only thing we know how to do best,” says Ahmed*, a progressive Muslim, patriotic Pakistani and a sad Ismaili.

Isn’t it a failure of the government and security agencies that they could not do anything for these people, even after it was known that the Bohra and Aga Khani communities were being threatened?

How many more need to die before our so-called saviours open their eyes and smell the blood?

The Ismaili community might be mourning today but they will rise again – and they will be even stronger than they ever were before. They will not pick up arms and wage a war against those who have wronged them. No. They will work hard for the betterment of society, hoping for something good; hoping for people to change; hoping that they create a safe world for all.

*Names have been changed to protect identities

He is a final year media student at Institute of Business Management, who is aspiring for a career in news production. He tweets as @imhussainali (twitter.com/imhussainali)