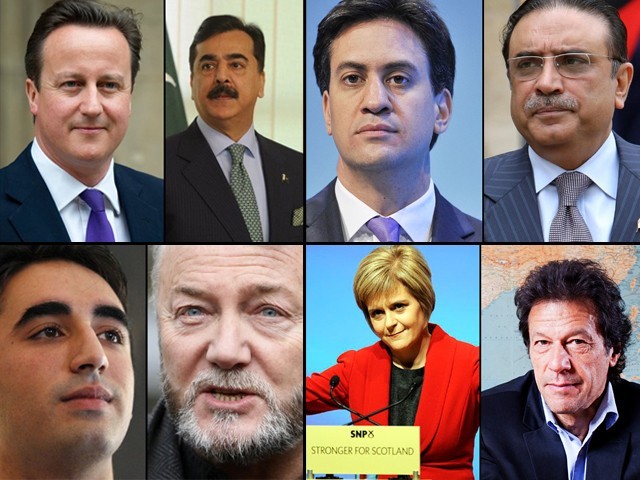 Lesson for Pakistan’s media savvy public and politicians is that polls, surveys or analysis of political pundits might educate you about certain trends in a forthcoming election, but on Election Day, things can go south for them.

On May 7, 2015, the 56th general elections of the United Kingdom were held to elect 650 members to the House of Commons. Victory of ruling Conservative (Tory) Party, led by Prime Minister David Cameron, surprised many.

However, from purely a Pakistani perspective, there are many lessons to draw. Ten of them are mentioned here:

1. As a party leader, if you lose, you resign

This might sound alien to Pakistani ears, yet it is true. Unlike the land of the pure, ethics is a hall mark of British politics. For me, as a Pakistani, it was quite surprising that within hours of election results, party leaders of all three major parties – Labour, UK Independent Party and Liberal Democrats – resigned, taking full responsibility of their party’s defeat.

Now imagine this in a Pakistani context, where winning or losing an election cannot affect the party leadership in any way. Mostly it is death that does them apart and even after death there are bright chances that political leadership would be inherited.

2. The ruling can rule again

Unlike in Pakistan, where political parties come to power one after another, UK general elections 2015 hinted that a ruling party can reclaim its victory depending upon performance and popularity. In fact, the ruling Conservative Party gained 24 more seats from the previous elections.

In a Pakistani scenario, it is normally assumed that the party already in power would have to wait for a five-year term to pass. Our parties hardly make it for successive two terms at national levels. The one thing Pakistan can learn from UK elections is that, in politics, parties should keep playing the musical chairs game – sometime, they should aim at staying on and making the difference they aspire to make.

3. The third-party factor can be surprising

What UK is experiencing with regards to the landslide victory of the Scottish National Party (SNP) winning 56 out of 59 seats in Scotland, Pakistanis had a similar experience in recent past with Pakistan Tehreek-e-Insaf (PTI). In 2013, PTI came forth as a powerful third party and surprised many. Although their victory was not comprehensive enough to claim power at national level, yet their presence was felt across the national political scene.

Be it PTI in 2013 or SNP in 2015, a lesson from Edinburg to Peshawar is that third parties with regional dominance can surprise old and well-established political parties. Taking them lightly can be a political disaster.

4. Polls and pundits can go wrong

“No pollster, no pundit, no political leader saw it coming”.

Prior to the UK elections, all polls, surveys and pundits agreed that it would be a neck-to-neck election between the two major parties. However, no one anticipated majority for one single party. To say the least, anybody hardly anticipated the Tories’ great come back with 24 more seats.

Lesson for Pakistan’s media savvy public and politicians is that polls, surveys or analysis of political pundits might educate you about certain trends in a forthcoming election, but on Election Day, things can go south for them.

5. Social media might be spectacular but it is insignificant

Perhaps the most important question in the UK these days is,

“Did something happen online which influenced the voters?”

Significant attempts were made in the current UK elections to change people’s minds. This includes Ed Miliband’s interview with Russell Brand – which was watched over one million times on YouTube, the creation of hastags like #Milifandom and #Cameronettes, and the usage of #GE2015 by almost 500,000 uses in one week alone. However, even with Miliband’s social media presence, it didn’t do much to change the voters’ opinion.

I'm so looking forward to next five years. Less strikes, no license fee… Heaven must be missin' an angel… #cameronettes @cameronettes

I guess #Cameronettes were actually a thing after all then. #GE2015

And this is exactly what happened in Pakistan too. The dominance of one particular party on social media during the 2013 general elections did not translate into votes and this is where politicians need to set their priorities right. For a country like Pakistan, with a rapidly growing user-base of social media, it’s important to realise that social media might be spectacular yet it is insignificant to affect the final outcomes of an election.

One of the biggest upsets of the UK general elections is the victory of 20-year-old student, Mhairi Black, from SNP. She is Britain’s youngest lawmaker since 1667.

Being a woman of such a young age, Black is surely an inspiration for Pakistani women interested in politics. If steered and guided appropriately, Pakistani young women could make history too like her.

Pakistani political parties need to promote young and educated women – and no, opportunities should not be limited only to women with well-connected families or established political background. All women should be allowed to pursue their dreams.

7. Muslim women in politics – the legacy of Benazir continues

As the first female prime minister of a Muslim country, Benazir Bhutto’s legacy serves as a beacon for Muslim women in politics across the globe. In the 2015 elections, 13 Muslim MPs have managed to win in their constituencies. While in the House of Commons this might not be a significant number, yet the presence of eight women among them is impressive. For the first time in history of UK, a total of 193 women would be MPs this time.

8. Humpty Dumpties can have a great fall

The defeats of big wigs like George Galloway, Ed Balls, Nigel Farage and many others underscore that politics is a cruel business that can be very mean at times.

An obvious lesson for Pakistani politicians is that no one is larger than life, at least in politics. If you perform, deliver and satisfy the voters, you have bright chances of survival. Otherwise, the same people would cast their vote, look straight into your eyes and say,

9. For elections, media power is good but real politics is better

George Galloway, founder of the Respect Party and a former MP of the British parliament, has enjoyed more media projection than any of his contemporaries, for various reasons. He is a pro-Palestine supporter and he also hosts a show on Iranian press TV – which makes him controversial as well famous. However, his defeat to a Pakistani-origin female candidate in Bradford is an eye-opener.

A simple lesson for Pakistani politicians is that perception management through media can help only to a certain extent. So while one may keep one head above the clouds and use the media as their mouthpiece, real politics requires ones ‘feet on the ground’. This holds true for Pakistani parties whose leaders are not in sync with their people.

10. Regional grievance need to be addressed

The landslide victory of SNP in Scotland needs deliberation. UK is working towards its regional issues.

In a Pakistani context, the underlying message is loud and clear. If grievances at regional levels – albeit the Hazara community, the Siraki belt, Gilgit-Baltistan or Balochistan – are not addressed, the reaction could surface politically at a national level.

The United Kingdom is one of the oldest democracies in the world. If we really wish to entail all democratic procedures in Pakistan and make ourselves better as a democratic country, then it would do well for us to pay heed to the UK general elections. There is a lot more that we can learn from them. All we have to do is look in the right direction, with the right perspective.