#KarachiBusAttack: Forget free speech, where is our right to life? 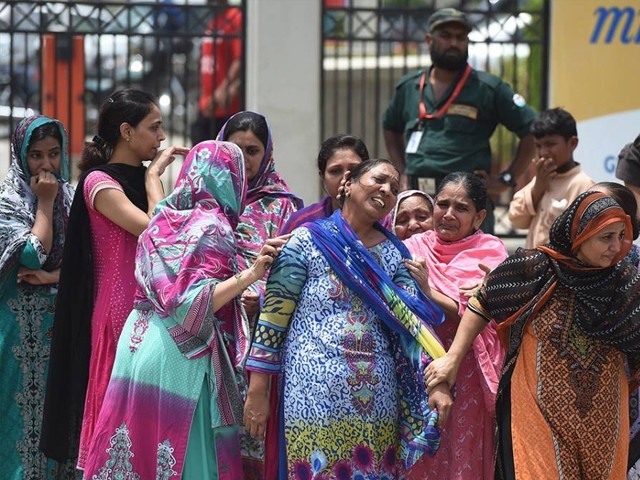 Mourners arrive at a hospital following an attack by gunmen on a bus. PHOTO: AFP

A recent survey showed that Pakistan was amongst the least racist countries in the world. Certain people celebrated this whereas others used this as an excuse to taunt our Indian counterparts. Today, the results of this ‘survey’ are now null and void – 43 people from the Ismaili community were killed in a bus attack today.

Eight armed motorcyclists, some of who were disguised at security officials, boarded the bus and opened fire on the passengers. The bus only had Ismaili passengers on-board, which clearly indicates the intent with which this attack took place.

Events like these mean nothing more than a day of mourning and people going back to their regular lives the day after. Pakistan has completely failed in protecting one of the most peaceful and sacrificing religious minorities of the country. There is no longer any room for error. No Ismaili has ever been involved in politics or crimes in Karachi yet they are being targeted for a war they are not even a part of. Their only crime, perhaps, is peacefully following their belief.

The social implications of such an incident are disastrous. Either the Ismailis will become extremely enraged and will want to take matters into their own hands, leading to reactions that we do not want to see happening, or they will lose whatever little trust they have in the government’s ability to protect them. People already feel insecure within the boundaries of their homes; this is now doing nothing but destroying their confidence in humanity, peace and the government.

The sky is red again and dead is the conscience of our leaders. This attack only goes to show that we are now a ‘failed state’. The basic principles upon which Pakistan was made are now not only being neglected but also rejected. Let me remind us about Jinnah’s first speech as the Governor General:

“We are starting in the days where there is no discrimination, no distinction between one community and another, no discrimination between one caste or creed and another. We are starting with this fundamental principle, that we are all citizens, and equal citizens, of one State… You are free; you are free to go to your temples, you are free to go to your mosques or to any other place of worship in this State of Pakistan. You may belong to any religion or caste or creed – that has nothing to do with the business of the State.”

There is nothing that can even be considered close to equality within Pakistan. Discrimination upon basis of creed and race is prevalent. People like Aamir Liaquat conduct sessions of hate speech on their shows, they incite racism and sectarian intolerance amongst Pakistanis and yet we live on. Our government seems to have washed their hands of all responsibilities with regards to minorities in the country, and yet we live on. Our politicians have failed again and again at providing security to the citizens of this state, they are a disgrace to our parliament, and yet we live on. They are working on metro buses, Wi-Fi in rickshaws, subways, IT towers, distributing laptops and living behind huge walls of protection whereas the first and foremost requirements are food, water, security and shelter. And YET we live on, blindly. Selfishly.

Promises are made every day in the wake of such incidents but never have they been fulfilled. The murderers of Allama Nasir Abbas and Sabeen Mahmud still roam free, savages like Mumtaz Qadri are still celebrated and people like Zulfikar Mirza get extensions for bail but the government has yet to stand firm. Our politicians are concerned only with the economic prosperity of their own bank accounts and nothing else. As always, promises have been made but when will these savages be captured? When will the police uniform become a symbol of fighting crime instead as one committing it? When will there be justice?

Have we honestly learnt nothing from the Peshawar massacre? Have we forgotten how mothers of the victims were left to die from within? How could our intelligence agencies, police and government bodies let this happen again?

This is indeed a failure at which we must end this series of barbarism. We have been broken as a nation; our eyes cry red tears, our hearts burn in anger and anguish. The flags on our rooftops must fly at half-mast today. Our government must avenge the death of these innocent women and men.

We talk about right of free speech but now is the time to discuss the right to live. Not only must the criminals be brought to the courts of justice but the government, police and intelligence must be held accountable for this. They take oaths to serve us, not rule us; lead us not enslave us; protect us, not sell us. They must be taught a lesson for it is not only the enemies’ inhumanity but their incompetence that we end up paying with our lives for.

Pakistan was made by a Shia – Jinnah was a Shia – and yet we cannot protect those who have given their lives for us? If this is where Pakistan is headed? There is not a rough road ahead, it is no road at all.