There is no Bhutto left to rebuild PPP, Mr Zardari 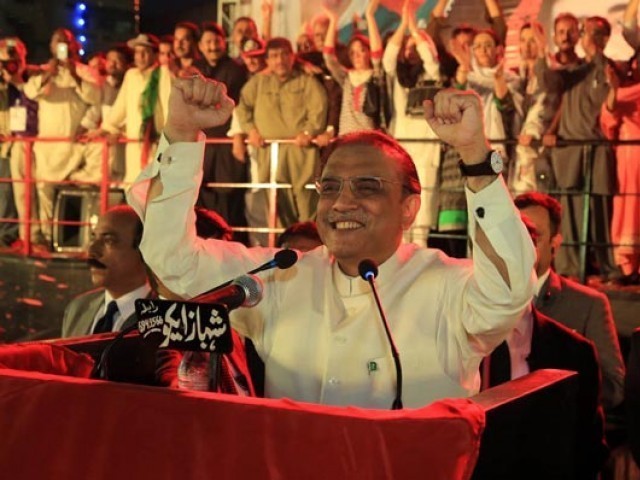 Pakistan Peoples Party (PPP) has decided to kick-start its campaign for the upcoming general elections. For this reason, and to prove that Lyari is still its stronghold like it has been in the past, the party organised a public gathering recently in Kakri ground.

In a bid to gain local support for the coming local government polls and general elections, the party’s co-chairman, Asif Ali Zardari, during the public rally, announced multiple developmental projects. He said that the PPP government will build an engineering college as well as a housing scheme and promised that the people of Lyari will get jobs in public departments as well as a smooth supply of water to the area.

I, for one, found this announcement rather odd.

PPP has been in continuous power since 1988, in various capacities. It has led the federal government four times and has been part of the provincial government multiple times after it got established. And since the days of Zulfikar Ali Bhutto’s historic rallies, Lyari has been PPP’s so-called stronghold. So why is it that even after ruling Lyari for almost 30 years, the area does not have its basic necessities covered, such as clean water and provision of employment?

This speaks volumes of PPP’s leadership in the area. And the question remains that if PPP was unable to provide these basic necessities to Lyari in the last 30 years, what chances are there that it would fulfil its promises now? Especially for a party whose slogan is ‘roti, kapra aur makaan’, such a situation is disappointing, to say the least.

And the people of Lyari seem to think the same.

PPP has lost considerable backing here and resistance was seen in the area before the gathering took place, as the party’s posters and banners were torn down. The party brought supporters from Gadap Town, Bin Qasim, Badin, Thatta, Jamshoro, Hyderabad and Sajawal to fill the Kakri ground to its capacity of around 35,000. But even after this, PPP’s importance seemed to have diminished in the area.

Additionally, PPP minister Javed Nagori, who was elected from Lyari, was attacked a few days after the gathering in which his brother lost his life. However, there were no processions or exhibitions of sorrow from Lyari’s side.

This has proved that all of PPP’s efforts, including their ‘jalsa’ to regain their support in Lyari, have completely failed.

PPP is facing perhaps the most difficult time of its history. It has several challenges to face simultaneously – intra-party rifts, Bhutto family rifts, poor local government performance, fear of turning the on-going Karachi operation against it, law and order situation in Karachi, Uzair Baloch’s statements against the PPP leadership, losing support even in Lyari which had never happened in the past, and the biggest one, the highly serious allegations levelled by Zulfiqar Mirza against the party’s senior leadership.

To muster public support, Zardari loudly extended support to Kashmiris in his speech. This is an indication that the PPP will use the Kashmir issue in its campaign for the next election. By doing so, PPP would be the country’s first liberal party to use this issue for polls.

The poor situation of governance and progress in the province has reached to a point where people from the private sector have started taking matters into their own hands. They have initiated development projects, relief and compensation for victims of floods and bomb blasts as well as gathered ransom money for Somali pirates in order to release the Pakistanis held captive. These initiatives have raised a serious question mark on the existence and performance of the PPP-led governments, both at the centre and provincial levels in recent years. Another such example is Bahria Town, which is doing what the government was supposed to do in Karachi – create homes and develop the city.

In order to truly revive the party’s image and regain the trust of the masses, PPP should learn from its past mistakes, reset its priorities and should focus on its performance in Sindh. Zardari should realise that there is no Bhutto left in PPP today who can help rebuild its tarnished legacy. Only tangible, visible progress can save PPP now. Reconciliation policy alone would not benefit him anymore.

While mostly depending on alliances with other parties to remain in power in recent years, Zardari seems to have lost his faith in PPP. This is evident from the party’s consistent offers to Muttahida Qaumi Movement (MQM) to join the Sindh government. This is a mere lack of confidence and depending on others not only damages the party’s image but also disheartens PPP leaders and workers alike.

Many believe that the PPP has almost died while trying to keep Bhutto’s name alive. Today, PPP needs to follow Bhutto’s actions in order to be reborn as a political force and not just use his name in empty rhetoric.

The writer is a Karachi-based journalist.