Reham Khan tells women to “stop complaining” – As a man, allow me! 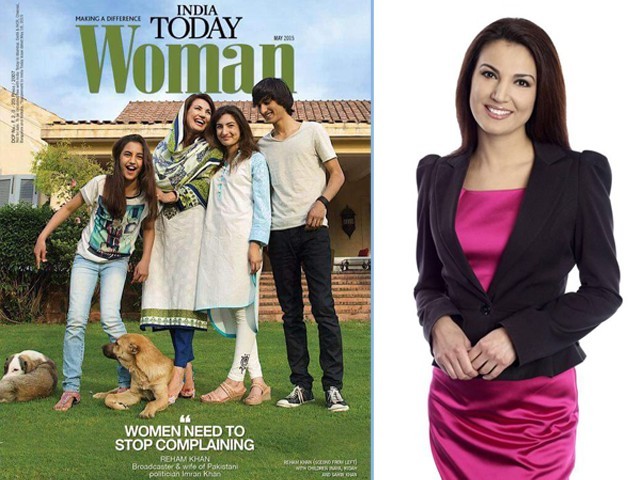 Reham Khan, in an interview for IndiaToday, advised women to “stop complaining”, and expressed her disapproval of their constant ‘whining’ and self-pitying. Perhaps I should try putting my male privilege to good use by whining on their behalf for a short while?

The cover of IndiaToday featured a clichéd garden shot of Mrs Khan with her children; bound in a moment of sweet domestic bliss witnessed often in magazines, seldom in cooking oil commercials, and never in real life. Beneath the saccharine image, in bold white, are printed familiar words of conformity to the patriarchal system that drive Xanax sales within the feminist quarters:

Yes, fie on these females for not having adjusted well enough to the atmosphere of rampant sexual harassment, domestic violence, slut-shaming, body-shaming, rape, honour killings, and everyday acts of subtle sexism that are hardly even noticed. The issue isn’t that patriarchy exists; the issue is that its victims don’t know how to handle it with poise.

As part of a predictable puff-piece, dutifully hitting all gender-stereotypical questions regarding marriage, dresses, jewellery, husband and children, the interviewer finally asked:

“How do you look at the place of women in society?”

Displaying casual ignorance of her privileges as a person of wealth and political influence, she answered the question in a manner so acutely patronising, it may be mistaken for satire:

“I really think women need to stop complaining. I’m very unsympathetic to whiners. Stop making excuses for yourself. First change your perception that you’re inferior in some way. I don’t think that I’m a woman; I am an individual, and it doesn’t limit me from doing anything.”

In other words, Reham sees women’s place in society as chronic complainers, which is truly our primary concern, isn’t it? Not the fact that women lag far behind men on the economic front on account of being harassed out of the buses and offices, forced to stay at home changing their babies’ diapers, and occasionally shot at while trying to go to school; not the fact that they lack social and reproductive freedoms that men take in their stride; and certainly not the fact that politically, women in some parts of the country like lower Dir are struggling to hold on to their basic voting rights.

The problem is that when tradition stabs them in the back, they cause far too much noise pollution.

In Reham’s world, women’s poor self-perception is the heart of the problem; and not the society’s perception of women. They are all probably just imagining sexism where they are clearly none. All they need to do is smile, start believing in themselves, and knock together their ruby slippers, transporting them to whatever celestial bubble Mrs Khan resides in. The society, as always, remains beyond reproach.

I state the above with relative comfort, because as a male, I’d never face the kind of vitriol my allegedly “hypersensitive”, “overreacting”, female counterparts would face for writing this exact piece. A man’s speech is speech, and a woman’s speech is a screech.

I’ve never received rape threats and faced sexual harassment for my writings on one end, while on the other having my torment belittled by Reham Khan and her ilk who think I whine too much.

I wonder if I’d ever get to see her tutor her husband on the virtues of not “complaining” all the time about political affairs, or does the whining of passionate men differ from the complaints of opinionated women?

And just because Reham identifies herself as an ‘individual’ and not a ‘woman’, doesn’t mean the rest of the world ceases to view her as latter. The challenge is to meld into the society ‘as a woman’, not a person with her gender identity blurred out to fit better into the male-dominated structure.

Dare I suggest a different approach?

Instead of mentoring women on how to accept their gender-specific punishments with grace, teach society to stop meting them.

If the voice of the victim of inequality bothers you more than the presence of inequality itself, you may need to reassess your priorities.