#NA-125 election: Not much to celebrate for PML-N 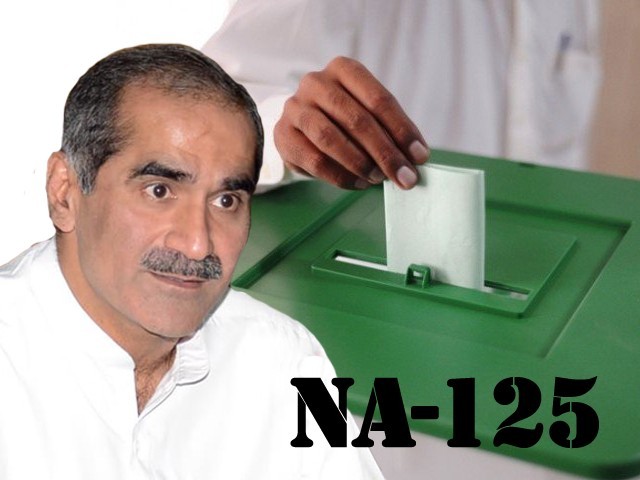 Only a few days ago, this now suspended decision blew hot air into Pakistan Tehreek-e-Insaf’s (PTI) deflating balloon. A few days before that, Pakistan Muslim League-Nawaz’s (PML-N) victory in Cantonment Boards Elections and a devastating loss in NA-246 by-elections had pushed PTI on the back foot. The lost fervour and vigour revived on May 4th, when Hamid Khan’s petition against Saad Rafique’s election was accepted.

First off, let me clarify that a suspension means temporarily rendering an order ineffective. It in no way means that SCP has overruled the tribunal’s decision, not yet at least. It is basically a matter of routine for an appellate court to suspend orders of a trial court during pendency of an appeal. Rationale behind such suspensions and stay orders is to maintain status quo and not let circumstances change on basis of an order that may eventually be overturned. All it implies is that the appellate court has not found the appeal to be completely without merit and thus has not dismissed it in limine.

So there isn’t much to celebrate for PML-N, or to frown upon for PTI, just yet.

It is not surprising that SCP has chosen to admit Rafique’s appeal for hearing. The tribunal’s order did clear him of any and all allegations of corrupt or illegal practices. The tribunal based its order on irregularities found in the election process, and not on misconduct of any candidate. Furthermore, contrary to certain news reports, the tribunal did not ‘disqualify’ Mr Rafique nor has it declared his election void per se. It has instead declared the NA-125 election void as a whole, and yes there is a difference.

Section 68 of the Representation of Peoples Act, 1976 (ROPA), provides ‘ground for declaring the election of a returned candidate void, if any irregularity, corrupt or illegal practice is found to have been committed by him or on his behest’. In the absence of any such finding, Section 68(2) bars the tribunal from declaring Rafique’s election as void.

Section 70, on the other hand, provides for declaring election void as a whole, if ‘any person’, including the election officers, has failed to abide by election laws and rules, and if the tribunal finds large scale corrupt or illegal practices by more than one candidate and other persons. So there is merit in Rafique’s appeal and its admission for hearing was expected.

However, this does not mean that the SCP will necessarily overturn the tribunal’s decision; it may dismiss the appeal eventually. Celebrations in the PML-N camp are thus premature and not expected to last for long. Even though the tribunal cleared Rafique of any guilt, there were grave irregularities found in the election process attributable to the election commission and election officers. These observations of the tribunal can have twofold implications:

1. It may lead SCP to uphold the tribunal’s decision as in line with Section 70 of ROPA.

This roller coaster still has a few ups and downs on its path. Thanks to the over-enthused supporters in both camps, some level tracks are also portrayed as ups or downs. Today’s suspension, for instance, is not a victory for any party. Final disposal of the appeal pending before SCP will decide the fate of NA-125. Similarly, final decision of the Judicial Commission will decide the fate of PML-N government.

SCP may feel inclined to uphold the tribunal’s order and the Judicial Commission may hold the elections unfair and not free or transparent. This does not mean that previous elections were free, fair and transparent. But finally, these age old malpractices, negligence and callousness has been exposed, investigated and brought out in the open. If we can come out of all this with an improved electoral system, we will be winners as citizens of Pakistan.