Is there any solution to Karachi’s trigger-happy muggers? 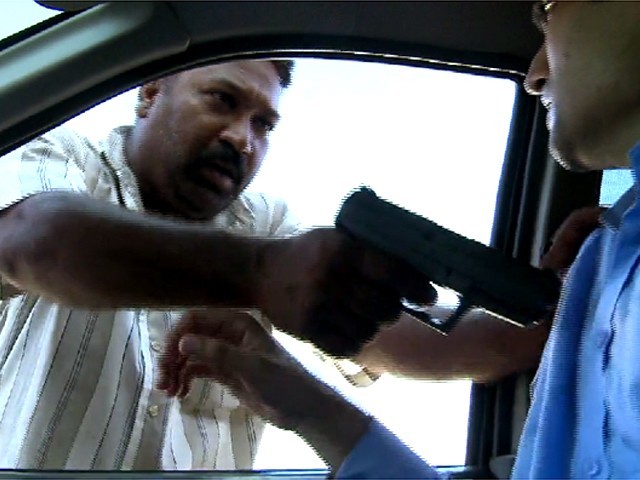 I looked up only to take in, at that moment, the handle of a revolver, and a hooded figure. PHOTO: SCREENSHOT (Danish Ali's video)

I sat there, bewildered; you expect it, consciously, yet subconsciously you believe you’ll be immune from it, somehow, by some grand scheme of the universe.

Once the calm after the storm had washed over, it was replaced with a racing pulse and bouts of anger. Inadvertently, I uttered a curse directed at that hooded figure that only moments ago had stood in the figure of a knell beside me.

After four years in Karachi, I somehow believed I had become equipped in the tools of avoiding being mugged. I barely used my phone while in the car or in public transport, carrying my wallet in such a way that important cards are kept in a different pocket till I could safely replace them.

The sun had only begun to set and there was still daylight. We were in a traffic jam and I was already fretting about being stuck in the embouteillage for another good half an hour, so with nothing else to entertain me, I turned to my phone to play music and sing along – whiling away the time.

I was looking at the screen when I heard a heavy knocking at the window. I thought it was a beggar and I decided to concentrate on finding the song I was looking for. The thump returned, heavier than a human hand could produce this time. I looked up only to take in, at that moment, the handle of a revolver, and a hooded figure.

Gingerly, I pressed the button to lower the window, and with deep breaths I let what I had prepared for in my mind multiple times over, occur. The revolver slithered past the open window and a voice muttered “phone dou” (give your phone) followed by a “wallet dou” (give your wallet).

I fumbled and gave my phone, but insisted that I did not have my “purse”. He repeated it with greater force, and then my eyes fell on a trembling hand; an unsteady disposition that this clearly unskilled mugger held.

Without a second thought I reached into my back pocket and handed the wallet, with a feeble, failed attempt at slipping the debit card out – simply because it’s a pain to get one renewed and it would be useless to the man in a few hours.

With the handing over of the wallet, I finally took in the features of my fated mugger in the time it took him to remove the revolver and dash to the car behind us.

My initial anger subsided within an hour; however, it was replaced by anger directed elsewhere – the elusive authorities that be.

He was hardly a year or two older than I was. A young chap, scared as hell, decent features. He wore the thug costume quite well, it must be noted.

I realised that here I was, 22, chasing my dreams, forging paths to a future, building relationships and experiencing the best of what I possibly can. Yet there he was, possibly not even dreaming, far from the countenance that a 22-year-old should have. Far from the experiences any young adult should be coerced into by circumstance. True, he could find work – there are a million arguments, rightly so, as to what he did was utterly despicable and wrong – but there’s a foreboding sense of knowing: are the options available truly equitable to this quick fix?

With an increasing number of street urchins, especially in Karachi, forging their lives on the streets with no shelter, no foster care or system in place to protect them from clearly neglectful parents, it’s no wonder that these children eventually find their way into the hands of those who offer them protection, take them under their wing and use them to do the scat work, giving them a percentage for their loot.

More so, where are the vocational training programs and employment opportunities supported by the government for those people who are denied education? For those young adults who could possibly be used in other areas where employment is offered with shelter and food (ideally state-sponsored)? Mobilising this section of human resource and allocating it where it could do more good than harm should be the priority of our government right now.

I blame myself for perpetuating a vicious cycle of not participating in bridging the divide between the different socio-economic strata, I blame those who turn to illegal ways to obtain a living for the personal decision they undertook, and I blame the “elusive authorities that be” for focusing on all the wrong infrastructure and not utilising what is there and (re-)allocating it and creating opportunities; for not forming programs from the grassroots to avoid the street crime levels that are prevalent at the moment instead of tackling it with arms and force when it is prevalent.

It might be a foolhardy question but when will we start laying foundations the fruits of which will be reaped by generations to come?

I’ll leave it at this Greek proverb, which perhaps some elusive old man might read it, perhaps something in him might stir and change:

“A society grows great when old men plant trees whose shade they know they will never sit in.”

The author is a medical student at the Aga Khan University, and a student of life and literature at heart. He is primarily interested in the sociology associated with what makes the common Pakistani who he or she is. He tweets as @vishalraza