The baba near the seashore 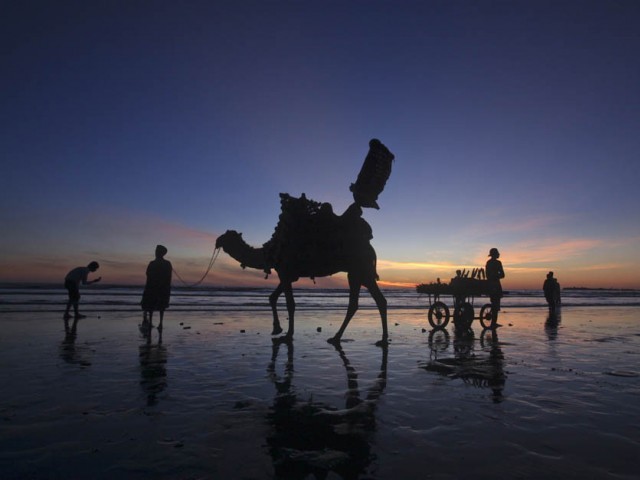 A man sells roasted corn from his cart as another waits to give camel rides to residents visiting Karachi's Clifton Beach. PHOTO: REUTERS

He was 14, as he walked alongside the beach, barefooted, with his slippers placed under his armpits. The powdery sand tickled between his toes as he walked, until the dry soil met the wet mud and eventually the water.

He was one of the few people in the brightly lit city of Karachi who would wake up before dawn and come to the beach. He had his reasons to do so. He would wake his aged grandfather up for the morning prayers, prepare a bucket of warm water for his ablution and make tea for him after he was done praying. He would then catch the local bus – if they were still running – or walk to the beach.

His expeditions to the coast were wonderful. It was usually deserted at that time, which made him feel like he owned the waters and the sand. He would sit at the edge of the waterline, where the water came at him, wet his legs and left him unharmed. He loved every part of that. His grandfather would say that the morning prayers would cleanse his sins, had he committed any, but he always felt the sea before him was what would free him from the evils he had or had not done.

But recently, a new activity had caught his pleasure.

He had met an interesting fellow with the same interests as him. The fellow was an old man with grey hair and he walked with a camel alongside him at all times. He used to travel from a far place, but he managed to take out enough time from his endeavours as a camel rider to accompany the boy at dawn.

The first time they met, the boy was alarmed. He had heard of kidnappers along the coastline who committed crimes for ransom. He was very presumptuous of the old baba upon their first meeting. However, the baba was very kind; he gave the boy a ride along the beach on his camel for free, gave him hugs and shared a piece of bread with him. The boy liked the fruity bun that the baba had offered him and that became their customary breakfast.

What the boy enjoyed the most though were the talks he had with the baba after the fun and games were over. When the sun had come out a fair distance in the sky, the clouds were no longer auburn and the sea was no longer dark. They would just talk.

And it was no ordinary talk. The baba allowed the boy to ask one question a day, and the baba promised to tell the truth and share as much information he knew about the topic. This intrigued the boy.

Upon their first meeting, the boy had asked the first thing that came to his mind.

“What happens when we’re dead?”

The baba had smiled.

“When we’re dead,” he said, “two things happen simultaneously. Instantly, our souls are separated from our body. Then gradually, our bodies are separated from this world. We bury them under the mud and the clay to remind the body where it came from. The soul is taken far above in the skies where it replenishes it sins and the deeds done good pay-off.”

“Farther than just that sun, boy. Farther than the farthest star you may lay your eyes upon.”

“But does it hurt baba?”

The baba chuckled and the boy was left curious for the entire day.

The boy had never felt nervous when asking the baba about anything. But today, he felt a sensation in his stomach, like butterflies flying here and there. However, he was confident the baba would answer his question. The baba never hesitated in answering anything that he asked. If the baba can describe the stars that glide far in the cosmos, he could certainly answer a simple question about love.

So it happened. The atmosphere was perfect for the boy. The sun had started to peek, the clouds were orange, the sky was auburn and the sea was dark. Ripples of water would wet the boy under his legs and push him aback. He waited for the baba that fine morning, with the butterflies still flying rampant in his stomach, before he heard the soft trotting of the camel and the baba beside it.

“Salam,” greeted the baba with a wide smile.

He pulled out some fruit bread from his knapsack and sat beside the boy. The boy also smiled generously at the baba and accepted the offer of bread. There was some silence as the baba consumed the bread and the boy also nibbled on his part a little. Both of them would silently listen to the sea as it conveyed its messages through torrents and waves, far across the oceans and extravagantly beneath their feet.

“Baba, what is love?” the boy said almost abruptly.

He had found that eating while butterflies flew around in his tummy was a difficult ordeal. The baba wrinkled his already wrinkly forehead.

“What has a boy your age to do with something as intricate as love?”

Now the boy had his forehead wrinkled.

“Baba, you have told me about the vast spaces in the universe, about the people who have come thousands of years before us, done wonderful things for the earth and now you decide that what I have asked is complicated?”

The baba gave some thought on what the boy had demanded. He rested his bread on his lap and looked at the boy.

“What is it that you want to know?”

“I just want to know what love is.”

He looked at the boy. The boy was underwhelmed. He realised that he had only one question and it was wasted on this. Nevertheless, the baba insisted that he ask again.

“I want to know how one knows he is in love. I hear everyone talking about this. My dada (paternal grandfather) loves God, the politicians love Pakistan and I love this fruit bun. However, how does one know he is in… love?”

The baba remained quiet for some time, formulating his thoughts to form an appropriate response. The boy looked out at the vast ocean in front of him as the sun began rising through the horizon.

“Love is delicate boy. There are various types of love in this world, some stronger than others. Your dada loves God because of the many bounties God has bestowed upon your dada. That love is discovered through years of worship. The politicians love Pakistan for their greed. They love it until the country feeds them and makes them rich and nothing beyond that. You love the fruit bun for the taste it leaves on your tongue and because it fills your appetite.”

The baba looked at the boy. The boy’s eyes gleamed slightly as the sun made its way into the sky.

The boy jumped from joy. He had rallied a bunch of questions in his head already.

“How do I acquire true love baba?”

“Love is forever present in your heart, in everyone’s heart. It is like the air you breathe in. If you contain it within yourself, you will die. You must inhale and exhale; share your mortality with the world. That is love. It is ever present in you and it grows once it is given away.”

The boy seemed to grasp the concept of this phenomenon, but ambiguously. The boy thought about another question to ask the baba but he shook it off. The old baba could see that the boy was troubled so he asked him,

The boy shook his head.

“Nothing baba, it is irrelevant.”

“Nothing is irrelevant today boy. Speak your heart, for I may not be this generous tomorrow.”

The baba gave a reassuring nod.

“Baba I want to fall in love. I want to see a beautiful girl and feel as bright as the sun before us. I want her voice to flow through my body like the sea flows on the sand, I want to look at her as fondly as the clouds stare at the sky and weep like they do when I miss her.”

“Boy, you do not know what you are wishing for. Very few have found what you have described and I would also argue they have only found a part of it.”

The baba placed his hand on the boy’s back.

“What you must truly find is the love you have stored within you, the illuminating light that brightens your eyes, which you consume day after day. If you do not spread that love, you will be left cold and crippled by my age, with only a camel as your company.”

The boy looked at the baba, who looked sad. His old sunken eyes told various tales of bereavement and selfishness that led him to where he is now. However, the boy was more enthusiastic about the idea of love than the baba gave him credit for.

“Baba I will not be in that position. I will find love and I will share it. I will hold onto it like my dada holds on to his faith, like the politicians hold on to greed and like I hold on to this fruit bun. I will not let it slip away.”

The boy stood up from excitement and the baba followed. The sun had found a high enough place in the sky to ponder upon the action on the beach.

“Boy,” said baba, “today I have taught you all that I know. You have extracted every ounce of information that my old mind has stored and I have nothing more to give to you.”

The baba placed a hand on the shoulder of the boy.

“Your life should be full of excitement. You must follow your heart but consult your brain. You must find God and you must be a faithful man, but son, you must always share with the world, what is in here.”

The baba placed his hand on his heart.

The two hugged once again and the baba cued the camel that it was time to leave.

With the sun slowly making its voyage across the sky, the baba gathered his things and said farewell to the boy, never to be seen again. The boy stood there, eyeing the baba as he left.

The water trickled beneath his feet and he felt the power of the oceans, the light of the sun and the vastness of the sky all in the centre of his palm. The warm gentle heat on his back melted his adolescence away. His life had begun and he had never been more ready for it.