Forced to sell alcohol: Why is the ‘ummah’ silent over the plight of Chinese Muslims? 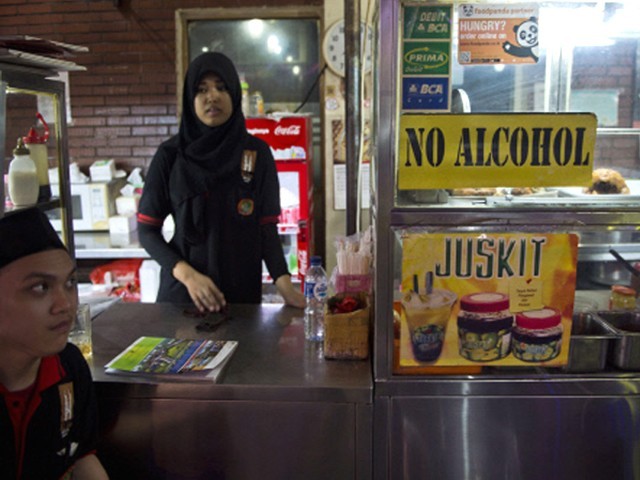 Chinese authorities have commanded Muslim shopkeepers and restaurant owners in a village in Xinjiang to sell alcohol and cigarettes. PHOTO: AFP

Some of us may even say what’s new in this, and Pakistan’s minorities have suffered this and more. And they have. And no minority anywhere in the world should have to go through this.

But there is a huge difference in this and what is happening to the Muslims in Xinjiang province in China. In Pakistan, this is done at the hands of extremists. But in China, it is at an official level that Muslims are forbidden from practicing Islam. The last year or more has seen repeated incidents of Muslims, a religious minority in China, being coerced into going against their religious beliefs. That too under state patronage.

To remind ourselves, the People’s Republic of China, Pakistan’s bestie, is where media is still state-owned. Instead of monitoring media, they control it! Coercion is also a norm when it comes to the nation’s reproductive health decisions. While family planning is a legitimate aim, the modus operandi is faulty and against the spirit of human freedom to lead lives as they see fit.

What is happening in Xinjiang is another example of this tendency we see in China. While it is justified if China wants to mitigate extremist groups in the region, why must all Muslims in the region have to suffer because of what some are doing?

It makes one shudder to see the news and images that on social media in recent months. Imams being forced to dance, fasting being banned, women being forcibly stopped from wearing veils and men not being allowed to grow beards . The imams were, in fact, made to swear to an oath that they would not teach religion to their children. They were forced to tell children that prayer was harmful for the soul and had to chant the slogan that,

“Our income comes from the CKP (Chinese Communist Party) not from Allah (SWT)”.

In a verdict that made headlines, a court in China sentenced a Uighur Muslim man to six years in prison for “provoking trouble” and growing a beard. His wife also, reportedly, was served a two-year sentence for using a veil to cover her face.

The recent most bit of news is very disturbing. Chinese authorities have commanded Muslim shopkeepers and restaurant owners in a village in Xinjiang to sell alcohol and cigarettes, and display them in eye-catching ways to undermine Islam’s influence on locals and as part of a campaign to weaken religion, according to reports.

While extremism leading to terrorism is something every nation will deal with in its own way, reactive policies end up, in fact, further fuelling extremism. The more you try to stop something by force and not via dialogue, the more it will get inflamed. The cycle of hate and violence will continue if we keep pushing communities and people against the wall.

While the Pakistan-China friendship is encouraging for our nation, one is forced to wonder how come our rulers, who claim to be staunch Muslims, have not raised their voice against all this in any forum. Is it a case of vested interests silencing an important issue?

Sadly, Pakistan is not the only Muslim country that has remained silent on this issue. The “ummah” remains conspicuous by its absence as usual, chooses its battles wisely, and only fights for causes that have an incentive in the end. There is no one to fight for the underdog. In this case, that is the Chinese Muslims. It seems that China is too strong, and the world is too enamoured by it or too indebted to it to take up this human rights issue.

What these people are being subjected to leaves us also with another introspection in the end. Part of the problem here is stereotyping. The beard. The pants above the ankles. The burqa. The face veil. Things that are expressions of a centuries’ old faith are being seen as signature marks of extremism, so much so that peace loving Muslims face reverse discrimination in their own communities and in their own homeland.

The next time we assess someone on the basis of pre-conceived notions and stereotypes we have been fed, let us check ourselves for unfairness that we all are often guilty of.