Business-class tickets for a stale bun – A fair compensation? 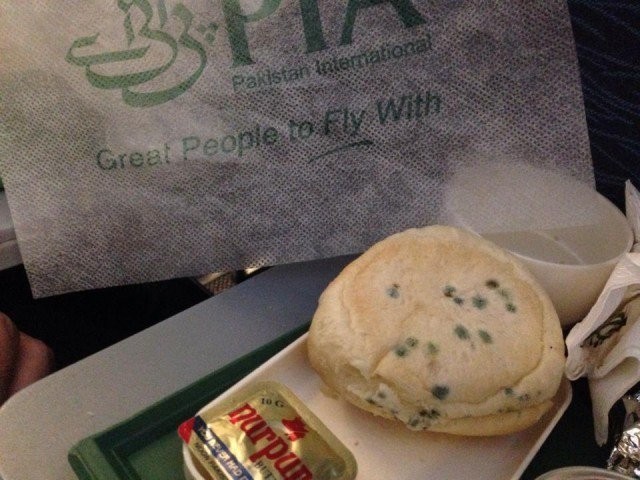 PIA has been under scrutiny over a case of a stale bun served to a passenger. PHOTO: FACEBOOK

It seems as if we lose all our values as we grow up. What is taught to us as children ebbs away as we hit adulthood. Unity, faith and discipline turn into mere words instead of values. The word Pakistan should hold immense importance and respect in our hearts and therefore, all the establishments being operated in association with Pakistan deserve equal respect.

People of Pakistan or should I say ‘citizens of this great nation’ have a duty to uphold the integrity and honour of the state. By defaming a national establishment, we inevitably end up defaming our state.

Recently, Pakistan International Airlines (PIA) came under scrutiny over a case of a stale bun served to a passenger. Sara Zafar Malik, the individual who posted the picture of the bun on a social media forum, clearly wanted to be in the spot light. She claims that her two-year-old daughter was served a stale and fungus infested bun on a flight from Islamabad to Birmingham.

Total chaos ensued after the picture went viral on social media. Various pro and against opinions have been formed over Ms Malik’s story. With most stories in favour of Ms Malik, how will the judge presiding over this case give a final and unbiased verdict, especially with only one angle being presented?

What about PIA? Do they not have the right to defend their image? Should they not get a chance to prove themselves innocent?

“At first I thought it was a normal fruit bun. But when I turned it over, there was green fungus all over it. It was really bad.”

She took numerous pictures of the bun, joked about it with her husband and returned the meal tray without registering any complaint with the crew.

I am extremely confused. When joking about an incident and then posting it on social media with a tag line, “share it as much as you can”, did Ms Malik not realise that her actions could have severe repercussions?

Firstly, if she had such an issue, why did she not take up it up with the authorities there and then? A simple complaint would have sufficed, rather than creating a public scene on a public forum. An official flight complaint log is actively maintained by the authorities, yet she chose not to file a complaint there. Maybe Ms Malik thought it would be more exciting and effective if she voiced the issue on a food forum on Facebook.

Secondly, if this were a genuine case, why did the other passengers not complain about stale food being served to them? How is it that out of the hundreds of passenger, only one passenger managed to get a stale bun, considering the fact that it was from the same batch of buns given to the other passengers? Either Ms Malik was travelling alone on the flight or none of the other passengers were served lunch. It makes no sense.

Moving on to the issue of compensation, Ms Malik was approached by PIA officials to resolve the matter. She was of the view that PIA owed her an apology and should be compensated in some form. Upon being asked what she wanted, to everyone’s surprise her reply was,

How is this fair compensation?

According to her, she was wronged by PIA because she was served stale food.

My question is why did she not ask PIA to probe into the matter and bring the culprits behind this to justice, or even advise them to keep a strict check on the food being served on the flight, so that chances of such incidents occurring can be reduced?

How is asking for business-class tickets against a stale bun remotely justifiable?

How can she blame the whole organisation for the act of a handful of individuals?

She had pointed out that sharing photos of the stale bun on social media would keep her friends safe and they would be careful while flying the airline, yet, she is willing to fly the very same airline in a more lavish manner?

What about people who are not her friends? What about those people or families who live abroad and travel by PIA? What about foreigners and government officials? Had she complained to the officials about the incident, which in this case did not happen according to PIA officials after an internal investigation, the problem would have been solved that very moment.

How can we expect good things from the world when such people continue to damage the image of Pakistan? How can justice prevail when such people get the opportunity to right a wrong but instead they opt to gain personal benefits by exploiting a national establishment?

So you see greed can get to everyone. Exploiting a national airline for free tickets: bravo Ms Malik, bravo.

The author is an MBA graduate and is currently working as a social media manager. He tweets as @hamxabt