When you’re at the salon and you hear “Aap ki larkiyan Christian hain?” 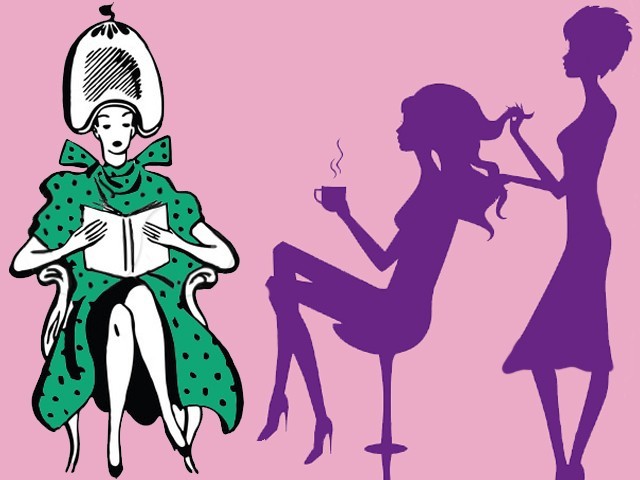 Blowdryers all around had stopped buzzing to hear the conversation between the two women.

I was expecting that being a “foil” lioness for a full-hour at a top-notch salon in Karachi and not being able to move around, read a magazine and put on headphones, was going to be painfully long and boring. But as I sat, heard and watched all the action from the mirror for an hour, I not only lost all my faith in Karachi, Pakistan and humanity but somehow gained it back again within the same span of time.

On an ordinary day, I probably wouldn’t have even noticed her come in! Beige duppata perched on her head with a Louis Vuitton bag loosely hanging from her arm, she came in and did a quick room scan. She took off her sunglasses and looked down at the reception desk where the salon owner sat browsing on her iPad and uttered a soft-spoken “salam”.

After the usual pleasantries and exchange of tight-lipped smiles, she asked,

(Is your staff Muslim?)

My eyebrows shot up and I turned around to make sure I heard what I think I had heard.

The eager-to-please salon owner looked up and smilingly said,

She rested the Louis Vuitton on the reception desk and continued,

(Are all your girls Christians or there is a Muslim one as well?)

Let me add that this woman looked reasonably educated and well-exposed, and totally unaware of her insensitiveness.

The salon owner tried her best to mask her shock but still managed to say,

(What difference does that make?)

But this woman was unperturbed that her question echoed throughout the salon and could be easily heard by all the girls working there. Blow-dryers all around had stopped buzzing to hear the conversation between the two women. She soon continued,

(Actually, I get such private services done from Muslim girls only, like waxing, facial and the likes.)

“I’m sorry, all our girls are Christians, but maybe you can check other salons on the same street. You might be able to find a ‘Muslim girl’ for your work,” said the salon owner curtly.

The customer put on her sunglasses and left without another word.

We all exchanged a look of shock and horror. But no one said a word. What happened here wasn’t something new; we’ve all heard an older relative, family friend saying something to the same effect. In fact, there was an older uncle in my family on his deathbed who refused to get his diaper changed from a Christian nurse.

The younger salon-workers looked confused at this awkward exchange. One left the room in haste. The older girls carried on with their work, unaffected.

Ten minutes later, the same woman was back in the salon. A few sweat beads had formed on her nose.

(Listen, I have a flight to London today, I’m in a hurry and there’s a rush everywhere else. Any one of these girls will do. Doesn’t matter if she’s Christian.”

I was expecting that the salon owner would cow down to this customer. She’d ask these girls to work on this intolerant woman. Except, she just stared at the woman in disgust. The girls exchanged worried glances that they’d be asked to work on this woman who was too disgusted to let them touch her a few minutes ago.

And that’s when the salon owner’s daughter got up and took charge.

Without even asking any of the girls who worked at her mother’s salon, she said,

“I’m sorry but our ‘Christian’ girls won’t be able to do your services. I’m afraid I’ll have to ask you to leave.”

She scanned the room quickly, rolled her eyes and exited the salon.

This is what intrigues me always in Karachi – two Pakistani women with the same social and economic background and educational level living in the same city, yet, so vastly different in their perspective; one so deeply intolerant and bigoted and another one willing to stand up to all the hatred.

So if you’re losing hope about Karachi’s state of affairs, don’t leave just yet! There are still some wonderful human beings left around.

And one day, they will change this city around!