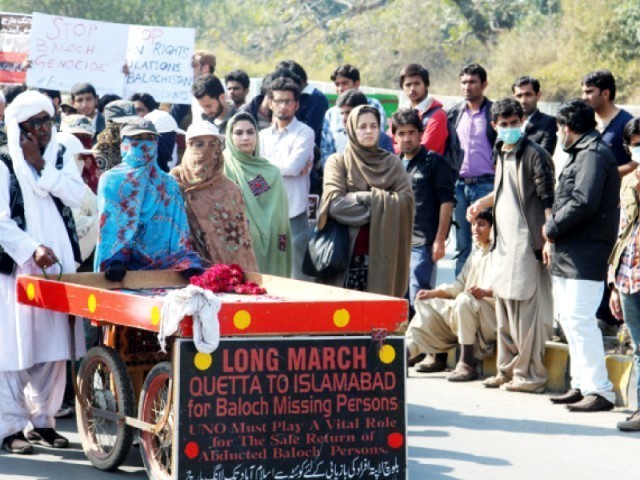 My uncle, Shaheed Asadullah Mengal was the first case of a missing person in Balochistan in 1974 during Zulfikar Ali Bhutto’s regime. PHOTO: SHAFIQ MALIK, ZEHRA HASHMI/EXPRESS

What concerns me most is a word. It is a simple word that is not heard on the lips of people in most parts of the world, but for me it is a word that desperately needs to be heard more often. Whenever I do hear this word, or say it myself, it stirs emotions that I cannot explain. I cannot do justice to the memories they evoke.

That word is Balochistan.

I have grown up around politics and in politics. For a daughter of a Baloch tribal leader and activist, politics and life are irreversibly intertwined. The need to understand the ethnic and national tensions that have plagued Pakistani society for decades is integral to how I think, and as important as the lives-and deaths-of family to these struggles. To understand what drives individuals, tribes and nations to do what they do is necessary to understanding this conflict.

Although many people are unaware of this, there has been resistance from the Baloch people to Balochistan’s inclusion in the Pakistani state since its forced annexation in 1947, when the state of Pakistan separated from India. The Baloch people have always viewed Balochistan as a proudly independent nation, asserting their right to self-determination and the right to pursue their own wishes in their own way; to employ their own mineral resources without the wealth being exploited by companies owned and run by the Pakistani elite. This select few make up the Islamabad government and the military that underpins its pre-eminence. The tribal system in Balochistan has been strongly held culpable for Balochistan’s impoverishment and ironically, most of the Baloch tribal deities serve the government.

My grandfather, Sardar Attaullah Mengal joined politics as an activist member of the Baloch movement. He served as the first chief minister of Balochistan and it was during his rule that the first university in Balochistan opened. Years have passed, governments have changed but the number of universities has not. He spent 10 years in jail only because he stood up against the tyranny that prevailed in Balochistan. It was during his revolt that his family was first targeted.

My uncle, Shaheed Asadullah Mengal was the first case of a missing person in Balochistan in 1974 during Zulfikar Ali Bhutto’s regime. My family refused to believe he was dead because no evidence of his body was found. There was always a ray of hope of his return; a hope which died the day my grandfather named my cousin after him. That’s when everyone knew Shaheed Asadullah Mengal, who was only 19-years-old at the time of his disappearance, was gone.

My maternal grandfather, Shaheed Aslam Jan Gichki, another advocate of freedom for the Baloch people, was murdered in 2002. Following his death, politics assumed new and frightening proportions. Our family was not only divided but hatred amongst us elevated for one another. The tactic of ‘divide and rule’ is one that I strongly believe the British planted for our agencies to adopt. Even though his murder is assumed to be the cause of tribal enmity, the ones who are aware of deceitful Pakistani politics know who is responsible for his death. The torment imposed on my family and the Baloch people, initially created a feeling of vulnerability, but as the atrocities within Pakistani society increased, my desire to understand why these things were happening, and to do something to combat them, increased.

Our wounds had still not been healed when my uncle, Shaheed Hasan Gichki, was brutally murdered in Central Jail Karachi in 2006. Not only was he a father figure to us but a man with profound dignity.

After Shaheed Akbar Bughti’s death, my father had become extremely vocal in Balochistan and instigated a wake-up call for the Baloch people. To hinder his cause, the agencies’ new target was us, Akhtar Mengal’s children.

My siblings and I were being followed to and from school. For our protection, he left everything behind, only to be trapped in a game he did not know was being played. He was arrested as a consequence of ‘harassing’ intelligence militia. Agencies and police surrounded our house in Karachi, as if a leading terrorist, and not a champion of freedom for our people, resided there. My father was released after the Pakistan People’s Party (PPP) came into power. Luckily, he was neither killed nor tortured in jail but was kept in solitary confinement. Unluckily, his food was poisoned to such an extent that that he suffers to this day.

After moving away in self-exile, my family thought things may get better but they certainly did not. Numerous Balochistan National Party’s (BNP) central workers were openly murdered on the streets. Shaheed Hassan Gichki’s father, Shaheed Nadir Gichki, was murdered in Tump allegedly by government authorities. My cousins, Shaheed Murad Gichki and Shaheed Zubair Gichki, were brutally murdered on the same day in Turbat. Many young Baloch brothers have gone missing and many bullet-riddled bodies have been found.

We pleaded and knocked on every door there is in the name of justice. Yet, no one heard us. What have we received from the people of Pakistan except neglect and torment?

The ones who are brave enough to stand beside us and hear our stories are targeted. Sabeen Mahmud was a fearless activist who not only stood up for what she believed in, but left a message which most of the intellectuals should make use of. If we, the Baloch, were ever considered a part of Pakistan, Sabeen would not be the only one debating.

There is a growing and pressing need to come to terms with the issues of Balochistan so that we can calmly and peacefully address what really matters; the well-being of all people and how to make sure that repression and reprisal is turned into liberation, mutual benefit and cooperation. It is only through the means of political discourse and agreement between willing partners that this can be achieved.

The state, with its immense resources (many of which are from Baloch sources) and institutions, continues encouraging disorder, disunity and fragmentation in the Baloch society. They use all possible resources to discourage any political and social opposition in the province-even those that are illegal and are opposed by western governments and human rights bodies. Both ‘pro-government’ and nationalist tribal leaders blame each other as causes of the problem, ultimately taking advantage of their power bases for their own selfish ends. They choose this, rather than working together for the betterment of Balochistan and its people.

Fragmentation and disorder in Balochistan has adversely affected the political and social process. Disunity among both tribal chiefs and moderate political elements has encouraged the authorities to increase the ferocity of the promotion of their agenda with support garnered by military and the intelligence agencies. The Baloch society, awash with natural resources, has vital strategic importance as it borders the conflict hotspots of Iran and Afghanistan, but it is crippled by its low literacy rate, minimal communication resources, and worsening social indicators.

What Balochistan requires is a change of perspective and to aspire to a visionary political approach to tribal leadership, to shun their minor differences and to work together to achieve lasting peace and bring prosperity to the traumatised Baloch population.

There are many reasons why the current situation is as bleak as it is now, but the major cause of failure to achieve political progress is a lack of understanding and a lack of clear strategy to respond to the Pakistani establishment’s malicious and hurtful policies; put in place to subjugate the Baloch people in place of real negotiation. Each political party and group is responding merely to their own agenda, and Islamabad uses this to its own end.

Baloch political groups need to come up with a plan to respond to Islamabad and create a win-win situation that benefits everyone. Whether this is feasible is arguable, the real sentiments that individual players in this scenario possess, is truly, anyone’s guess. On one hand, nationalists proudly assert their support for the oppressed Baloch, yet may only wish to keep hold of their power base and wealth that their feudal status confers. They accuse pro-government leaders of collaboration, yet they could be said to be as corrupt as their opponents given their refusal to step back from the tribal system that legitimises their territorial stronghold.

Equally, those taking money from government contracts could be said to be the mirror image of their opponents. Indeed, the dividing line is often less than clear; many tribal leaders take advantage of the benefits offered by pro-government leaders despite their apparent disdain. Corruption in the Pakistani enterprise could be said to be endemic to the point where it cannot be avoided at some point without a resignation from power that both parties refuse to sanction. It will take something more than heated words from positions of privilege to effect change. What is needed in Pakistan and Balochistan is a real need to open up government to true democratic change that cannot happen under the current tribal and federal system, as selfishness is integral to running both the state and the opposition. Deeply entrenched as they are, it may be possible if the will to achieve real political change can take place. At present, this is a very remote possibility.

The struggle of my people is why I wish to dedicate my life to the same goals as my family. To support our province, our people and achieve some degree of justice. But the status quo means I cannot do this alone, not until people as courageous as Sabeen Mahmud stand with us.

The lesson of East Pakistan should have been enough for most Pakistanis to stand up against injustice but I do not blame most of you, most of you are not aware of our despair. I write this, not with contempt but because I implore you to open your eyes, to heed our suffering and help build a better future.