Gilgit-Baltistan elections: The nth nail in the coffin of women equality 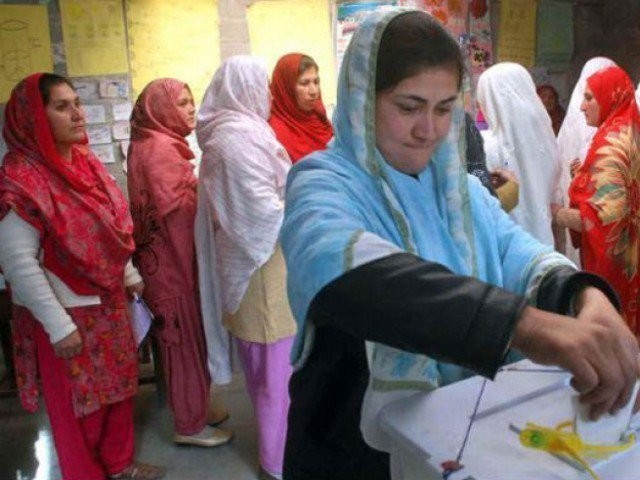 Religion has deepened its roots into Gilgit-Baltistan (G-B) once again, where the Legislative elections are set to be held in June, 2015.

The first symptom of this religiosity is the allegations against various party leaders for using mosques and imambargahs as launching platforms for their political activities. The second symptom is the current unanimous decision of a so-called jirga (local council) which bars women to vote, as it would put the religious, cultural and social honour of the region at stake – according to a report by BBC Urdu.

The jirga was held in Diamir, one of the seven districts of G-B.

Whereas both of these factors have always been part of Pakistani politics in various constituencies, the important aspect of this recent decision is not that the fatwa was declared in the first place, but that this fatwa is being equally endorsed by candidates of all major political parties contesting the elections. The political candidates of all parties unanimously agreed to follow the directions of these ‘ulema’ (clerics) to keep intact the religious and cultural dignity of the region and ensured the jirga that they would not bring women to polling centres.

For me, this is more disturbing than the decision of the fatwa itself. Candidates who are supposed to be neutral in terms of religious polarisation are throwing all ethics out of the window and siding with a draconian decree that is grotesque as well as backwards.

Women are the first to suffer when it comes to honour – albeit of a man, a family or a society. Our patriarchal roots have always tried to subjugate women; we have many examples of that. Be it the case of Mukhtar Mai and the backlash she faced after standing up for herself, or Benazir Bhutto and how she was maligned and slandered by the high-ups in politics, or Malala Yousufzai and how she is still being hated by majority of Pakistan – we see patriarchy at play in many colours here.

And this recent jirga decision is just another nail in the coffin for Pakistani women.

The jirga’s decision will disenfranchise almost 13,000 women from using their right of vote. Three days have passed since the decision was made, and so far no action has been taken against the clergy or the political candidates who supported this shameful and irrational proposal.

The decision is a strict violation of both human and legal rights of women. Such methods of isolating women from participating in a discourse in public life is an attempt to make them feel inferior and passive – who could easily be moulded according to the wishes of their male benefactors.

Women today constitute almost half of the population, yet they have been subjugated for religious and cultural norms in various part of Pakistan. We can’t predict if the future will take a realistic approach vis-à-vis women apartheid. But we can observe that the age-old practice of female seclusion is still very much present in the 21st century.

Back in 2010, the National Commission on the Status of Women found the same practice of women disenfranchisement in various parts of Khyber-Pakhtunkhwa (K-P) and FATA and asked the Election Commission of Pakistan in the recommendations of its report to take serious notice of the issue, but to our dismay, after five years, the same draconian method is being used against women in G-B.

The chief minister and their cabinet members, who we are told, are highly educated and respectful individuals, are still silent on the issue. Such is our moral standing. Moreover, respective party heads of G-B chapter are also silent on the issue, and they have not condemned so far the attitude of their party’s ticket-holders who were partners in crime with the jirga in presenting and agreeing upon the barring of women to vote.

The people of GB must differentiate between the honour of women and rights of women. Discouraging women to exercise their basic human right of freedom and expression must be opposed in all possible ways. Women can’t remain as silent observers in society following the orders dictated by men. The election commission, political parties, and civil society of G-B must record their protest and take steps to ensure that 13,000 female voters in Diamer are not secluded from the democratic and electoral process.

The government must take serious action against all those religious leaders who are denying women their rights though religious justification. As far as the political candidates are concerned, the election commission must ban them from running political campaigns unless they change their stance about women participation in the election process.

It is also important that religion and politics or religious politics should be replaced with democratic and rights-based politics – a more humane and equal-participatory democratic process. If democracy is ‘government of the people, by the people, and for the people’ then women participation must be ensured or else the state must introduce a new definition of democracy – a government of the men, by the men, and for the men.

Right to equality, justice, empowerment, and representation in a democratic system stems from the right to vote. Denying women this right is like denying them all the basic liberties that are essential for a society to grow. The women of this country need to be more active; they need to have a sense of equality within them and they should feel proud of being citizens of a democratic state.

The author has done his MS in government and public policy from National Defence University. He is a social activist, hailing from Gilgit Baltistan and currently studying at Aga Khan University, London

Is Pakistan capable of protecting its minorities?