Planning to study in France? You can’t if you wear long skirts 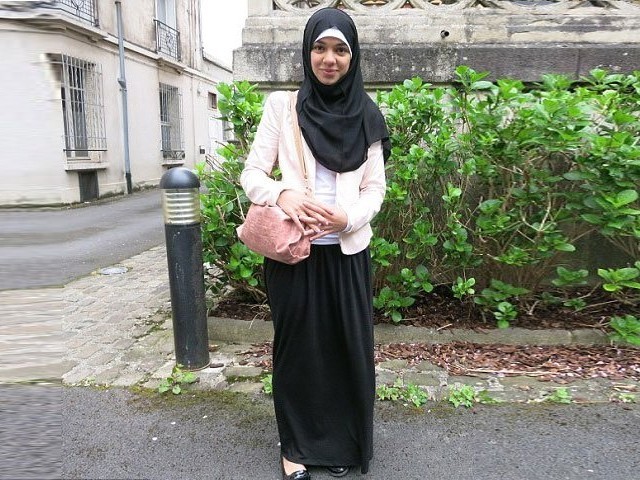 Sarah, a 15-year-old student in France, was suspended twice from class for wearing a long black skirt to school. PHOTO: TWITTER (@mailonline)

Recently, Sarah, a 15-year-old French Muslim student, was suspended twice from class for wearing a long black skirt because it was seen as a violation of the ban on religious symbols in public schools in France.

Due to this, France is facing a severe backlash against its so-called strict secular policy after the event took place. The justification provided was that if Muslim girls start wearing long skirts in a conspicuous effort to show their faith, then some will argue that is a breach of the secular law.

Due to these absurd rules and laws enforced by public schools, scores of Muslim girls who refuse to remove their headscarves have left schools due to enforcement of the 2004 law.

This incident caused a massive outcry on Twitter where the hashtag #JePorteMaJupeCommeJeVeux (I wear my skirt as I like) became a trend. Some users have been disappointed with the current developments and blame the authorities for religious discrimination, while others have resorted to using their sense of humour to get the point across.

Girl banned from class because of her long skirt… Is secularist France the new Iran? http://t.co/nxbNcM76PF #JePorteMaJupeCommeJeVeux

Is this what Liberté now means in France? Worrying #JePorteMaJupeCommeJeVeux http://t.co/ua8RL8zLmb

Sorry @EmWatson you can't go to school in France. Your dresses are too long ! #JePorteMaJupeCommeJeVeux #HeForShe pic.twitter.com/x3Qrrj5lSu

There are numerous factors associated with this incident.

The first factor that needs to be taken into consideration is the fact that women – from models on runway to brides in wedding dresses to your average woman walking on the street – are often seen wearing long skirts all over France but not once have they been banned from going to any specific area.

Runway models wear long skirts/models & its haute couture, but a Muslim does it and its a threat to secularism #JePorteMaJupeCommeJeVeux

Secondly, a large section of the French constitution is dedicated to “freedom of speech, expression and belief”. These basic fundamental rights were violated in Sarah’s case.

The question that rises is that are the French actually going to let the fundamental rights of a child be breached? Will they not prosecute the person guilty as per their own constitution? Are they seriously considering ones clothing as a sign of him/her preaching or enforcing a set of religious beliefs?

If so, they, and particularly the principal, could surely learn a thing or two from Bollywood movies like PK. Putting on certain attire does not make you a cleric, priest or a pundit.

This clearly shows an impeachment of the right of expression. Not only that, but this incident is also a blatant curtailment of the freedom of choice which is a part of the basic constitution of the country. Hence, in a way, Sarah has been victim to a crime.

Simultaneously, one very important factor that these authoritarians are forgetting is that it is her choice to cover her body and it is her choice if she chooses to do so with a short or a long skirt. When did skirts become a religious symbol? Perhaps she opened her closet, found a skirt and decided to wear it; little did she know that such a simple choice and decision to wear a long skirt would have such an impact that day.

I'm confused. Is freedom being told what to wear or choosing what to wear? #JePorteMaJupeCommeJeVeux

Being 15, there are quite a few complications in life, ranging between having to look cool and acceptable between friends to hiding any defects or scars that others might not seem to understand. Sarah’s case could be similar and even if not, she does deserve to clothe as she wishes.

If there is no ban on roaming around topless, why should there be a ban on covering your body?

If wearing a long skirt is seen as offensive to some, then perhaps wearing a short skirt, as acceptable as it may be, might offend certain conservative people as well. No doubt there are items that have the ability to symbolise religious beliefs, but clothing is not one of them.

When did a woman not wanting to show parts of her body become wrong and offensive?

Sarah deserved her freedom of choice and her wearing a long skirt and scarf is by no means a reason to ban her from school.

Nearly a month ago, a similar case took place when a judge deemed wearing a hijab unacceptable in court, which led to protests against the judge’s perception of clothing and religion.

To me, at least, the two cases represent the same story with the same protagonist and antagonist. Despite the principal’s absolute devotion to secularism, she should face the same punishment the Québec judge faced for kicking out a woman for wearing a scarf to court.

Every person’s clothing represents a specific belief, whether conservative or not, and since secularism in these particular cases defines itself as no affiliation with any belief, the only choice people have is to start going out naked to school. After all, they never know what can be deemed as a religious symbol. Men who roll up their jeans above the ankle (symbol of Muslim and Hebrew beliefs) can be penalised or banned from class. So better be safe than sorry.

In a nutshell, we need to bring a change and understand that secular or not, if clothing such as skirts is a religious symbol then a hundred other things can be considered religious as well. Therefore, we cannot simply ban students for their choice of clothing. It is the right of every person to clothe as he/she wishes and hence the decision to suspend Sarah and ban religious symbols from schools is nothing short of being absurd.

A school is supposed to be a safe haven for students to come, get exposure, learn about different cultures and religions, and learn tolerance and respect towards other religions. But if such principals are their role models, then we might have to reconsider the importance of schools or what they are teaching our kids.