NA-246 by-elections: Not as democratic as you think 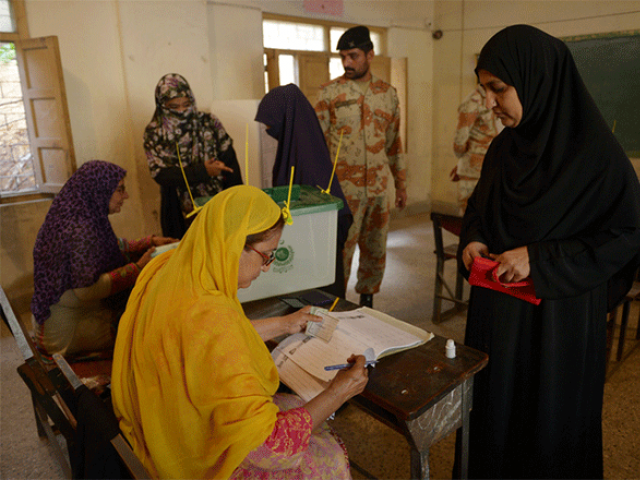 The by-elections in the much hyped NA-246 constituency was a day of infamy for Karachi and its citizens, and I feel the federal and provincial governments owe an apology to us, the citizens.

This constituency managed to gather an unprecedented interest as the by-elections were announced in the wake of the Rangers’ raid on Muttahida Qaumi Movement’s (MQM) headquarters and a controversial ‘confessional’ statement issued by Saulat Mirza behind bars.

The entire media, including political parties, sat in judgment to defame the party and created a frenzy predicting the coming of doomsday for MQM. I am in no way remotely linked with MQM, yet I am convinced that the entire focus was aimed at ridiculing middle-class educated Karachiites.

Surprisingly, it was as if our citizens were experiencing such an incident for the first time. Focusing on the elections, it seemed to me as if a fight was going on between David and Goliath, or a messiah was coming to liberate us from the demons, or as if we are living in under tyrannical occupation and the only way out of this mess was Imran Khan, our saviour.

The battle lines were drawn between the proletariats and the bourgeoisie. Predominantly it was a matter of class and racist behaviour. In any case, this turned out to be the finest hour for MQM, since the myth about bogus voting and over stuffing of ballots was shattered completely.

I beg to differ on the praises being heaped on the authorities by the press as to how peaceful and democratic the elections were. The overwhelming presence of law enforcement agencies in and outside the polling booths is a sad reflection on the incompetence and shrieking of responsibility on part of the Election Commission of Pakistan. It is baffling as to why no one is giving an explanation concerning irregularities in the voters’ lists. At some polling stations, the polling staff was definitely not ready for voters, which delayed the process and extra time was not allowed either.

Furthermore, some of the voters who by chance had brought their mobile phones despite the ban were asked to leave and denied the opportunity to vote. If a benign attitude had been adopted by the security agents, a person would have been designated to collect the mobiles and could have handed them back once their vote would have been casted – no big deal.

The decision of polling on a working day is incomprehensible; instead of a Thursday it should have been held on Sunday – hell would not have broken loose. Did officials in the decision-making process not realise that this particular constituency is mostly comprised of lower-middle class and self-income generating professionals? They had to be in at work by 9am and the delayed polling process ended up excluding quite a large number of voters. As has been reported in a section of the press, an MQM candidate was denied his constitutional and lawful right of visiting polling stations in his constituency.

Now, an important question which requires an unambiguous answer is will the Karachi election process model be replicated for the entire country, and if not, why was it thrust upon Karachi? Are the masses in this particular section rowdy or unruly? Or was it the extraordinary law and order situation which warranted such measures?

The democratic process does not allow anyone to hold elections under the shadow of bayonets and repressive methods. If the policy-makers are really sincere in restoring peace and tranquillity to Karachi, they need to adopt a Delhi-like model with a separate chief minister and cabinet for the city.

The divisive lines drawn on ethnic basis can only be quelled if all stakeholders are earnestly involved in the policy-making of the city. Otherwise, we should brace ourselves for a very bloody election next time.

The author is an Educationist for over four decades, compiler of official Pakistan Navy History and contributor to national dailies. He tweets @NajeebAnjum2262 (twitter.com/NajeebAnjum2262)