China can mistreat Muslims, but others can’t? 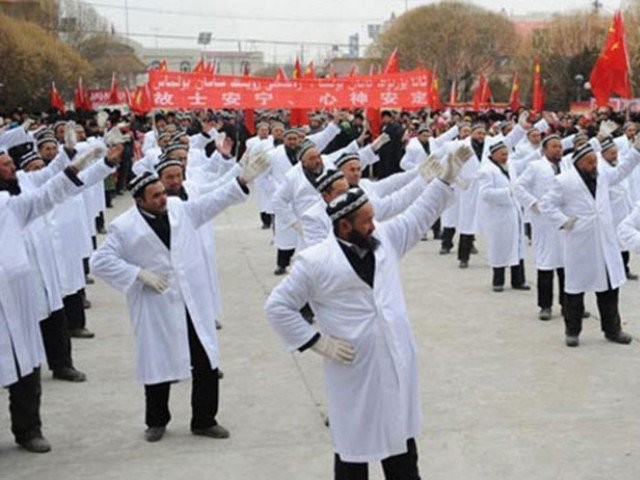 The imams are being forced to dance, fasting has been banned, women cannot wear veils and growing beards can land you in trouble. PHOTO: ON ISLAM

We were continuously reminded that Israel, USA and India are enemies of Pakistan, Islam and Muslims and they would take any step to extinguish Muslims from the face of earth. Our curriculum, television channels, newspapers and mullahs propagated the same at every occasion. Every other day, we witness rallies and protests condemning these countries for their treatment of Muslims. If an Indian, US or Israeli somehow slaps a Muslim, even that becomes the world’s most important issue for us and the ghairat (honour) of Muslims – especially Pakistanis – lights up.

All sects and people from all ages start condemning the horrific incident and demand that the government cuts off all diplomatic ties with that particular country.

However, we have never witnessed this in case of China – a country that has been given indemnity by us. The treatment of Muslims by the Chinese government largely borders on cruelty but none of the Pakistanis dare to speak a single word against it. This simply means that our ghairat has different standards. It doesn’t feel anything when the Chinese maltreat Muslims but same ghairat is very critical about the treatment of Muslims in rest of the world. In the past few years, no government has maltreated Muslims more than the Chinese but we all are lulled about it.

There is a long list of such incidents in which the Muslims of China are being targeted for their religious orientation. Imams are being forced to dance, fasting has been banned, women cannot wear veils and growing beards can land you in trouble. These are just a few of the many incidents which depict how Muslims are being oppressed in communist China.

Now let’s come to the be-ghairat (dishonourable) brigade’s standards of ghairat. The brigade is always up against the tyrannies of Israel, US and India. They never consider that religious freedom in all these countries is much more than what their long standing friend is offering to its citizens generally and Muslims especially.

They never utter a single word against China. From the government and parliamentarians to the religious scholars and the common man, everyone is quiet.

However, I have a few questions.

When we are quick to feel the pain of Muslims living in other parts of world, why can’t we feel it for the Muslims of China?

Why is the oppression of Muslims by the Chinese government all right for us whereas a slight sense of injustice by other countries makes us boil with rage?

When will we stop our double standards and act fairly?

I am happy being single, don’t force me to mingle!

Tip me or do it yourself!

How the corporate sector turned me into a hypocrite

Spare a thought for the policeman