Is World War III round the corner? 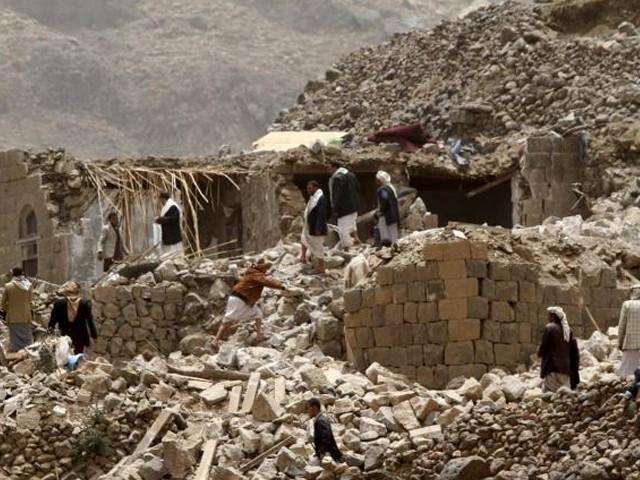 People stand on the rubble of houses destroyed by an air strike in Okash village near Sanaa April 4, 2015. PHOTO: REUTERS

The world is far from complex. While presenting it as such certainly puts food on the table for many people, the solutions to the contemporary world’s problems are generally quite obvious.

The basic formula behind them is no different to that of Europe in 1939, or even that at the time of the Ancient Rome – powerful leaders and the citizens of powerful nations, overtaken by the urge for establishing their hegemony.

But we all strive for peace, don’t we? Well, ‘a tree is judged by its fruits’. There are many whose sentiments are laudable, but the reality is bleak. Our planet is engulfed in a million fires, fuelled by greed for wealth and power. Their smoke is reaching the tips of our noses, as we thrust our hands into our pockets to keep them clean.

Nearly every country in the world is engaged in conflict, overtly or covertly, actively or in complicity. With each month, a new conflict emerges, inciting more men to beat their chests to modern day war chants:

Three noble words to a sincere ear but too often the dishonest tongue’s pretence for war and its dividend.

As for the public eye, it’s largely an apathetic thing; staring through the lens of a biased media at a Middle East on fire. With a twist of its kaleidoscope, it can change our perspective on anything. The age of unprecedented access has brought with it unprecedented influence. So Rome watches on, cheering and jeering, as the Middle East, Rome’s grandest Darwinian amphitheatre, fights to the death.

Nevertheless, the immediate question is whether or not we have crossed the point of no return?

Pope Francis said recently as he gazed across the harrowing scene of 100,000 World War II graves in the Redipuglia cemetery near Slovenia.

“Even today, after the second failure of another world war, perhaps one can speak of a third war, one fought piecemeal, with crimes, massacres, destruction,” warned the Supreme Pontiff.

And he was not the first to forewarn of the possibility of a world war. Addressing over 1,000 people at the 2013 International Peace Symposium in London, the caliph and worldwide head of the AMJ, Mirza Masroor Ahmad, offered the following warning:

“The threat of a world war is the biggest threat to today’s civilisation. It is a real threat and to prevent such an outcome we will have to think in a fair and just way, so that we can save the world from ruin.”

Their concern is real, as is their solution. Look inward and fix yourself, they say, and you’ll look up to find a better society. Their view on our future is shared by an increasing number of thinkers and political figures.

“I hope I’m wrong but historians may look back and say this was the start of World War III”, wrote Edward Lucas in the Mail.

“We must think of the future,’’ warned former Soviet leader Mikhail Gorbachev as he talked of the real prospect of a third world war.

In January, a group of scientists addressed an article to the ‘Leaders and Citizens of the World’ in the Bulletin of the Atomic Scientists. The lengthy and well-conceived article is summed up in the unnerving statement:

“…the members of the Bulletin of the Atomic Scientists Science and Security Board have looked closely at the world situation and found it highly threatening to humanity—so threatening that the hands of the Doomsday Clock must once again be set at three minutes to midnight, two minutes closer to catastrophe than in 2014.”

They’re not wrong either. Twenty-six years since the ostensible end of the Cold War and there are still over 4,000 nuclear warheads in active deployment. No sooner do we wonder why we still need them do we hear more debate on Trident.

The current plight of the world begs the question: Where are the peacemakers?

The answer is obvious, of course: the ‘United Nations’.

But that is an emotional answer rooted in nostalgia of a shared aspiration for the notion of a unity of peace for all nations and all peoples. However, by any measure of success the UN is today utterly failing to fulfil the core requirement of its Charter:

“We the peoples of the United Nations are determined to save succeeding generations from the scourge of war, which twice in our lifetime has brought untold sorrow to mankind.”

Yet 80 years have passed and the succeeding three generations of humankind have been scourged by war and ‘untold sorrow’. Rather than to fulfil its tremendous potential for good, we are left with noble denunciations and apologies. This much was illustrated in the belated words of UN Secretary-General Ban ki-Moon at last year’s 20th commemoration of the Rwandan genocide:

“It simply should never have happened.’’

The fear has to now be that any future apology will not be reserved for single groups, like the persecuted Rohingya people, but to the entire generation of our children as they come to terms with their collective inheritance – the third world war in a century, but the first nuclear one.

The UN, an organisation established to prevent a future world war, ironically conceived at the 1943 ‘Tehran’ conference, will probably fail for the same reason that the League of Nations did – failure to prevent a world war.

And so I ask the question again: Where are the peacemakers?

Humankind needs to find its humanity before it is too late. Otherwise the only comfort left will be that Einstein’s last theory will be proved true, and that nuclear war will be a mistake we won’t make twice.

The author researches the classical Islamic world and contemporary Muslim diaspora. He writes for The Independent, Huffington Post UK and Huffington Post Maghreb. Adam is a frequent commentator on social affairs and religion in the British media and author of the award-winning publication: 'Muhammad in History, Thought, and Culture: An Encyclopedia of the Prophet of God.' He tweets @adamwalkergb (twitter.com/AdamWalkerGB)