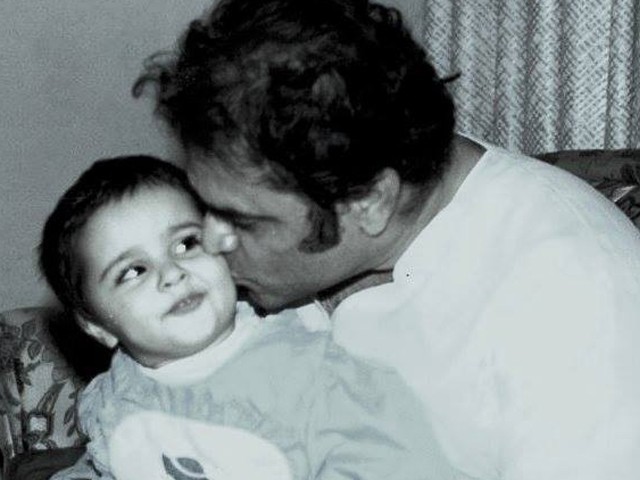 Two peas of the same pod, we are one entity, our lives entwined. If you press me to say why I loved him, I can say no more than he was he and was I.

One of my fondest memories of my father, more lovingly known as Abu Saleem, is when he would return home from Germany and I’d find him lying down right in the middle of the living room with everyone casually sitting around him because social norms were something he cared very little for.

But what a treat it was to see him. I’d go running to place myself on top of his belly, for his body would serve as a regal mattress (in my five-year-old head). Taking advantage of this close proximity I would always ask him the same question,

“Abu, how did you get that scar on your upper lip?”

This would make him launch into the exact same monologue about him being a naughty child that I had heard a million times before.

My father used to promise me strange things – like opening up a Sindbad in our garden – but the beauty of our relationship, and probably every father-daughter relationship, was that I always believed him. In hindsight, I understand that those promises were always fulfilled in more ways than one.

I was never the kind of daughter that they show in movies or the kind that my elder sister, Nadia, was. Growing up, I was not the spitting image of my mother that I now am nor was I the type of little girl who wore dresses, at least not willingly. In fact, I loved the Power Rangers and would make myself seem cross eyed just to amuse my siblings.

Often, people would meet me and exclaim

(She’s the splitting image of Taj)

Taj was the rather mortifying nickname for my father.

Then I would pray to the heavens to weaken my eyesight only so that I could wear spectacles like my father. I took great pride in being compared with him although I would pretend to be cool about any such comparisons so as to not cramp my style. In that sense too, I suppose, I took after my father. He was never one to express his love for us with words. Occasionally he’d tell one of us,

That outburst was to last us a good few months until the next one came around.

Nadia’s relationship with my father would always leave me in awe of her. She doted on him in a way that I found impossible to imitate. In his later years, she would take care of him in a manner that was both admirable and beyond my capabilities. After he fell sick in 2012, she would feed him, give him his medicines, trim his beard and constantly tell him how much she loved him.

I, on the other hand, dealt with his illness in the only way I knew how to; by kissing the top of his head and making jokes about the two of us. Abu was known for his impeccable sense of humour and infamous comic timing which I found enviable. For him too, the gravest of issues could become a source of great comic relief. When I speak of him, I get confused about whether I am describing him or myself, so similar him and I are.

A typical interaction of ours would be something like this:

To this he’d say,

A more emotional exchange would be,

This would be followed with his heart-wrenching reply,

(You are not normal)

He had a standard response to everything I said,

And this would be awkward for me, as to answer in the affirmative would feel a tad self-deprecating.

Two peas of the same pod, we are one entity, our lives entwined. If you press me to say why I loved him, I can say no more than he was he and he was I. There is no way to bring back a loved one but there are so many ways to show them how much we care, both when they are alive and after.

The biggest tribute we can possibly pay them is to live life to the brim by spreading happiness and more importantly by being happy from within.

I am happy in your remembrance, Abu Saleem. So don’t grieve, my child.

Here is why I can't trust the police in Pakistan