Is atheism rampant in the Middle East? 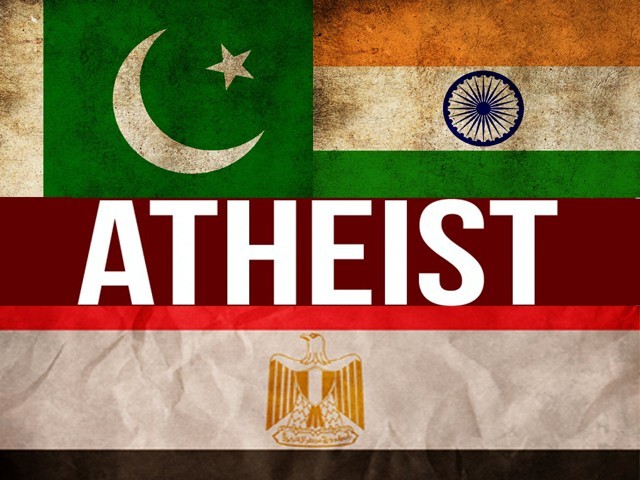 Although both India and Pakistan are facing a serious crisis of religious extremism, this has also triggered a tremendous rise of sceptics and critical thinkers.

Just recently Ahmed Harqan, an Egyptian human rights activist, stunned television audiences all over Egypt and rest of the Arab Middle East, by claiming his non-belief in the existence of God and his profound disdain to religious scriptures and ideology.

Following this astonishing revelation, a raging debate sparked all over the Middle East, since religion has been the most sacred form of thought in these parts of the world. It was very uncommon to discuss faith and scriptures, as it was considered blasphemous to question the doctrines of religion, and was even punishable legally. But over the last few years, things have taken new dimensions; largely influenced by social media, blogosphere and YouTube, many young people have started to openly raise questions and criticise faiths and ideologies worldwide.

India and Pakistan are no exception to such scenarios. Although both countries are facing a serious crisis of religious extremism and the growth of right-wing narratives notably in the middle-class section, it has also triggered a tremendous rise of sceptics and critical thinkers. Many bloggers have started questioning myths, dogmas, doctrines and sacred texts that have been forced on to them as benign faith.

In Pakistan, people haven’t showed up in the open as any form of dissent is retaliated by bullets. But, despite threats, Pakistan has hundreds of atheism and anti-religious groups and pages mushrooming on social media. The wave of religious fascism and violence carried out in its name, which has martyred over 50,000 lives including the dire dreadful Peshawar school attack that claimed 145 lives, has pushed many in Pakistan away from the fold of religion. The pace of the communication revolution in the last decade has liberated populations from the caged mind-set.

One of the predominant reasons for such a massive rise in religious critics is the incursion of religio-politicism, the blend of religion in politics, which has been a bread-and-butter combination for the political will throughout history. In India, in the post-globalisation era, the chain leap of god-men, Babas, faith healers, gurus, tele-evangelists, peace messengers, new age mullahs and the likes, and their proximity to the country’s elite and their million dollar assets has coaxed their fans and followers to suspect.

Many faithful – once devotees of these conmen – have now turned against them. Many religious apologists have used the garb of religion and spirituality as a shield to mask their devious activities. They have renegaded the innocent and ignorant, and have shamelessly been nabbed red-handed in their mischief and mass duping. The once hardcore devotees are now nursing their wounds, and are incensed and infuriated at the exhibitionistic behaviour of these god-men and tele-evangelists. People have suffered by consuming their impractical, irrational and nonsensical solutions to human problems.

Global Research Index groups like Pew and Gallop indicate that close to eight per cent of the world population are atheists or non-believers. India has a rich and age-old tradition of atheism, as it is deeply subsumed in Indian culture and heritage. The Indian national census does not explicitly count or lay emphasis on atheists. Moreover, an individual’s faith is categorised on the basis of his/her community and not his/her personal inner belief. Gallop surveys suggest that around 3% of the population in India claims to be atheists. The number could be even more since there are various forms and categories of non-beliefs.

In the United States, one of the most religious countries in the West, 16% of population claims to be atheists. The number is even more in Great Britain at about 30% and it rises steadily in Scandinavian countries and Western Europe. China is considered to be the population with the most number of atheists in volume, as a direct result of propaganda from the ruling Communist government. In Middle Eastern countries, such surveys are not conducted legally, but one recent report on BBC noted that an underground research asserted that as large as three million Egyptians claimed atheism. This is indeed breath-taking, if the survey is to be believed, since Egypt was considered to be one of the most religiously conservative nations, prior to the 2011 revolution.

One of the factors driving people away from religion and faith in God is the growing atrocities and savagery witnessed across the world, sworn in God’s name. Due to the enormous progress achieved by science, especially in communication technology over the last decade or so, it has propelled people to doubt and question unreason, irrationality, dogmas and myths. The things that were considered to be miracles three decades ago have now become a reality.

Irreligion and atheism are different concepts. Atheism is the absence of belief that any deities (gods) exist, whereas irreligion is the rejection in the sanctity of organised religions or religious beliefs. An irreligious individual can be perceived as a deist (belief in one God only). In many western countries, some attribute themselves as Christian atheists. Christian atheism is a theological position in which the belief in the god of Christianity is rejected or absent, but the moral teachings of Jesus are followed. Some atheists have doubted the very need for the term ‘atheism’. In his book, Letter to a Christian Nation, the renowned American neurologist and author Sam Harris wrote:

“In fact, ‘atheism’ is a term that should not even exist. No one ever needs to identify himself as a ‘non-astrologer’ or a ‘non-alchemist’. Atheism is nothing more than the noises reasonable people make in the presence of unjustified religious beliefs.”

Many new-age atheists believe that the world as they experience cannot be reconciled with the qualities commonly ascribed to God and gods by theologians. They argue that a god that is omniscient, omnipotent, and omni-benevolent cannot be compatible with a world where there is evil and suffering and where divine love is hidden from many people.

As the capitalistic and consumer-based world advances materialistically, the sanctity of religion and faith has been contaminated due to commercialisation. It has become fashionable to exhibit religion on sleeves as a statement against other rival faiths. The ability to appreciate other beliefs and tolerance has almost faded away. People have become increasingly self-indulgent, reluctant to introspect, but animated to point fingers.

The free market world has seen materialistic headway and has waned in intellect. Perhaps this why 19th century German political theorist and sociologist, Karl Marx, criticised religion as:

“The sigh of the oppressed creature, the heart of a heartless world, and the soul of soulless conditions. It is the opium of the people.”