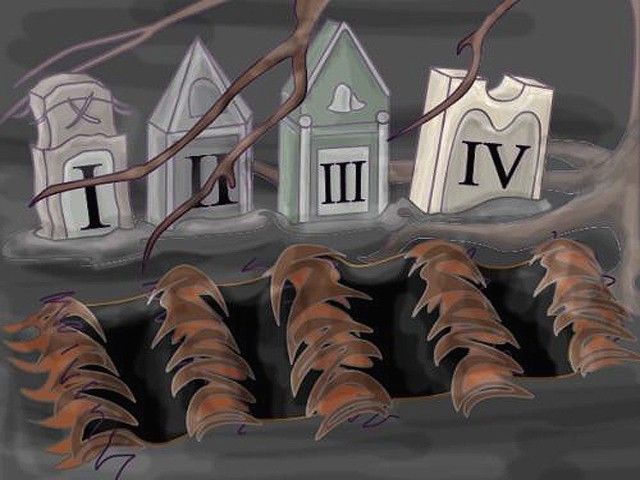 The police were nice enough instead to act as an escort throughout the exhumation.

Politics is a dirty business, be it at any level. Add religion to it and it makes a messy mix.

On Sunday night, the body of an Ahmadi citizen was exhumed from a graveyard near Bhalwal, because the graveyard was a Muslim one.

The police harassed the family until they acquiesced to the demand.

There are only two Ahmadi families in that area, but they have lived there for decades. According to the brother of the deceased, their elders were also buried in the same graveyard. But this time around, the clerics in Sargodha decided that they did not want a graveyard of their faith ‘polluted’.

Religion is supposed to be something between you and God, even when you are alive. Thus, people who do not give the living that freedom are wrong, but to continue hounding a person based on their religion even when he is dead is detestable. But have we heard a single condemnation from any of the politicians or the religious leaders on the outrage? No. Why? Because commenting on anything that has to do with religion (if it is against what ‘they’ believe) is shunned like playing with fire. There is no way you can leave unscathed if you dare speak up.

As far as I know, the Quran doesn’t say anywhere that a Muslim is ordered – or even allowed – to disturb a dead man’s peace, even if he is not a Muslim-even if a non-Muslim is buried in a Muslim cemetery!

According to the police, they did so because they were afraid that unless they did what the clerics had asked (read: told) them to do, there would be a law and order situation. If you think it is strange that the police bend so easily to the whims of clerics, please don’t be. We live in a country where religion was infused into politics with such skill that even decades later, no one dares to spoil the fancy ‘finish’. If anything, everyone wants to add a cherry on top. The Hudood Ordinance and blasphemy laws are just two glaring examples of no-go-areas. If you need recent examples, then the unanimous condemnations of Nawaz Sharif – who ‘mistakenly’ called Ahmadis our brothers after the attack on their worship places in Lahore – and Nilofer Bakhtiar – for suggesting that there was nothing wrong with selling alcohol at TDCP motels – should help job your memory.

Just on Monday, there was a rally taken out by some religious parties at The Mall, which brought the city to a halt, Now usually, whenever there is a rally or a protest there, the police are willing to impose Section 144, but on Monday, they did not. The police were nice enough instead to act as an escort throughout. The reason? They did not want to be on the ‘wrong side’ of religious leaders. It’s fairly simple, really. Just like George W. Bush spelled it out: either you are with us or you are against us (and honey, you do not want to be against us). Why would they want to be? They can slap you with a fatwa and declare you worthy of being killed.

Keith Olbermann, an MSNBC anchor, wrote in August about the Ground Zero ‘mosque’ and appealed to Americans not to fall victim to “prejudice and religious intolerance and our greatest enemy: stupidity, exploited by rapacious politicians.” In the same column, he wrote how he interprets Pastor Martin Niemoller’s ‘Then they came’: “But Niemoller was not warning of the Holocaust. He was warning of the willingness of a seemingly rational society to condone the gradual stoking of enmity towards an ethnic or religious group, warning of the building-up of a collective pool of national fear and hate, warning of the moment in which the need to purge, outstrips even the parametres of the original scape-goating, when new victims are needed because a country has begun to run on a horrible fuel of hatred — magnified, amplified, multiplied, by politicians and zealots, within government and without…Niemoller was not warning of the holocaust. He was warning of the thousand steps before a holocaust became inevitable. If we are at just the first of those steps again — today, here — it is one step too close.”