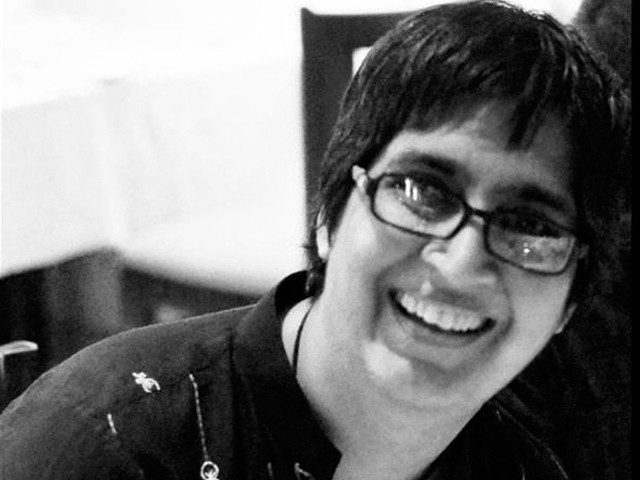 Sabeen Mahmud was brutally murdered yesterday, and with her, yet another flame in the vast darkness of our land extinguished. For those of us who had the pleasure of knowing her, she was genuine, warm, and always open to dialogue and everything we wish Pakistan would be known for globally.

She died shortly after hosting an open forum on Balochistan with, among others, a voice the government did not allow to speak at LUMS. With her death on your watch, we continue to be known instead for all the illiterate brutality, intolerance and narrow-mindedness that exemplifies the short-sighted policies of politico-religio-military convenience/expediency of successive governments and establishments, that keep coming back to haunt us.

To our prime minister, chief ministers and army of politicians, I ask whether you believe this will ever be a land where you could walk among the people you ‘rule’ without your army of guards. Is tolerance and respect for the differing opinions of others qualities you believe to be important for the development of nations?

I argue that, given the fact that progressive voices and intellectual discourse continue to be shut out in Pakistan while you watch in silence, with a word of condemnation or two, these attributes of successful nations are not high on your priority list.

The bulk of our education system continues to produce robots focused on rote learning of concocted historical and religious texts rather than free-thinkers and intellectuals – who needs those when you can buy a fake degree to get into the Parliament?

Our priorities continue to be the territorial integrity of Saudi Arabia, the Kashmir issue and how Ahmadis hurt our feelings, rather than the misery of street children and bonded labour here at home, the lack of access to basic healthcare and clean water for millions that don’t matter, the persecution of minorities like the Kalash, Hazaras, Christians and Ahmadis. 6.2 million children in Pakistan (probably a gross underestimation) are out of school. Voices of aggression, fanning flames of hate like Maulana Abdul Aziz and Hafiz Saeed continue to speak freely while voices of reason are selected for systematic silencing.

These, dear leaders, are our national emergencies and unless you address them rather than cow-towing to external interests, you will continue to fail Pakistan and history will hold you accountable.

The dispensation of justice, along with education, is a fundamental corner stone of successful nations. We are not one of those nations. While we find it convenient to convict those accused of blasphemy, and our legal fraternity finds it easy to fill courts with frivolous suits, those who kill in broad daylight with no lack of witnesses or confessions like Mumtaz Qadri continue to pollute our air by breathing it on your watch.

Our justice system is so bulky and clumsy that very few have any faith in the dispensation of timely justice. This, dear Justices, is the challenge of your era and an emergency in its own right. Judicial review of regressive laws that continue to make us the laughing stock of the world and force us to discriminate between Pakistanis along religious and ethnic divides is the need of the hour. Were you, among our most learned citizens, to steer us in the direction of open-mindedness and free the oppressed, this could go a long way in helping us out of the nose-dive Pakistan finds itself in.

And finally, to our Generals – the nation stands behind your overt initiatives against terrorism, sectarianism and even street crimes, since the civil forces lack capacity as a result of a combination of a dearth of vision of successive governments and money as a result of our inordinately skewed military budget. While we build missiles and buy attack helicopters, like any self-respecting nation should, the truth is we don’t respect ourselves enough to enforce our laws or respect our people. You know Ms Mahmud received threats for hosting her discourses questioning the status quo; naturally the role of the ‘powers that be’ comes into question, given how by personal accounts, she was apparently warned by ‘men in plain clothes without identification’ that she was in danger given her high profile activities.

Given our dubious civil-military history, the burden of proof lies with you dear Sirs. I ask you one question – will sophisticated weapon systems save Pakistan from implosion when all the literate voices and free-thinkers have either been silenced or migrated, and all that is left are the religious bigots, terrorists and feudal lords?

A paradigm shift in our security doctrine, dear Generals, is the challenge of your time. If you want your service to mean something and this to be a country for your children, we must realise that the greatest threat to the future of Pakistan is from within and of our own making.

Rest in peace Sabeen, and all the wonderful people before you that Pakistan has produced. You were an asset to our nation and represented the very best of us. May we as a nation one day prove worthy of your service and sacrifice.