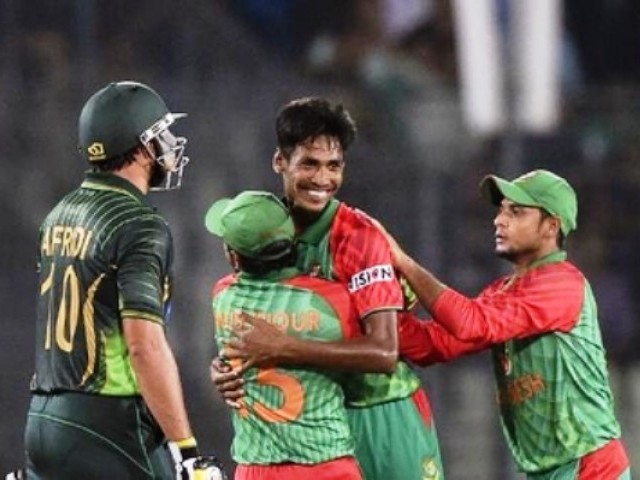 They dismantled the Pakistani bowlers who had no option but to be uber-aggressive in their defence of a small total. The Tigers came home with 22 balls to spare. PHOTO: AFP

If the purpose of the T20 format is to provide an adrenalin-filled summary of the game of cricket, then yesterday it succeeded. It is a snapshot, suspended in time, of two countries that have an obsession with their cricket teams which borders on the unhealthy. Through cricket we taste the macabre joys of licking our own wounds. But more on that later.

Here are the facts: Bangladesh has defeated Pakistan in three ODIs, and last night it beat Pakistan for the first time in a T20 match. All the matches were played in Bangladesh. The crowds were fanatical. Bangladesh has chosen not to debut too many. Pakistan has had to. Like I said, these are the facts. They are not up for debate. What is up for debate is ‘the why’ of it all. Why, for Pakistan, is this transition feeling like grinding teeth? Why do the players seem docile, moving around the field like they are on some high-dosage painkillers?

Pakistan made a stunted 141-5. None of the batsmen seemed to find an anchor – a reference point on a batting map peppered with poor shot selections and dot balls; 49 of them. Mukhtar Ahmed, the debutant, threw his bat, and though he went about his innings like a jumpy punter at the roulette table, at least he had a game-plan, and 37 off 30 to prove it. The rusty Ahmed Shehzad, playing for Pakistan for the first time in a month, looked like a sailor without a compass, undecided between the safety of defence and the need for offense in a format that does not tolerate uncertainty.

Debutant Mukhtar Ahmed’s 30-ball 37 was not enough for Pakistan as they slumped to a seven-wicket loss to Bangladesh in the T20I in Mirpur. Photo: AFP

Shahid Afridi will feel hard done-by. In the din of a packed ground, the Bangladeshi umpire raised the finger to a delivery that deviated wickedly off the deck. Afridi flirted with it; Mushfiqur Rahim – the guts and gloves of the Bangladesh cricket team – went up convinced. Afridi asked for the review and was informed there was none available. The ICC, the sport’s schizophrenic governor, needs to look at finding a uniform review policy. After the match, Afridi expressed his concerns, and the Pakistan team has not launched any formal complaints.

Bangladesh, itself the cause of two poor post-review decisions against India at the MCG, will empathise with Afridi. His wicket came in the 11th over, and though Afridi can turn a game in five overs, the larger narrative of the innings made that highly unlikely.

If this Pakistan team is beginning its evolution, then this Bangladesh team is well into its upswing. This has not come easy. For years Bangladesh has been a ‘one-innings’ team. If the batting fired, the bowling did not. If the bowlers restricted, the batsmen committed hara-kiri. Yet things are coming together now. Shakib al Hasan, for the longest time the international face of Bangladesh cricket, is being joined – and seemingly superseded – by the consistent Rahim, a player who has always offered understated accountability.

Captain Mashrafe Mortaza is there too, with strapped knees and rickety ankles, the stoic embodiment of post Test-match status Bangladesh cricket. Scouted from a tiny backwater, the once-raw pace-man has experienced the agony of teams that were abject, talented but immensely flawed.

Pakistan would do well to research their opponent’s history. Rahim and Hasan have provided the certainty that has allowed others to mature under the radar. Mahmudullah did so at the World Cup, as did Rubel Hossain. Taskin Ahmed, mentored by his captain and Heath Streak, the Zimbabwe pace legend, is coming on nicely, as is Sabbir Ahmed. And then there is Tamim Iqbal. The face of many a deprecating Bengali viral meme, the fluent left-hander now brings the air of a wounded warhorse with something to prove. Mustafizur Rahman, Bangladesh’s debutante pacer bowled 16 dots in his 20-2. Even more promise to the fore.

While once Bangladesh would have wilted having been 38-3, now its players plan out their collective innings. They did not panic, and set about the task of rebuilding without shrinking into their shells. There is not much to be written about this. Sabbir (51* off 33) and Shakib (57* off 41) did not panic. They dismantled the Pakistani bowlers who had no option but to be uber-aggressive in their defence of a small total. The Tigers came home with 22 balls to spare.

It is important that Pakistan recognises that it was defeated. Bangladesh was the better team on the day, as they have been on three other days before this. Maturing is hard business. It takes a lot of navel gazing and introspection. Cricket is played in the real world, in the nets and on the field, and not in newspaper columns and television studios. The analysis has been brutal.

There is hope in the impending Zimbabwe tour. Looking around at the crowd last night, one cannot help but think that Pakistan’s cricketers would have felt more than a pang of jealousy. They must miss playing at home, and the swagger that must come with walking out in front of your own people. Crowds make grounds transform into bullrings.

The attention turns to test matches now, and history will give Pakistan hope. They have won all eight of their Test matches against Bangladesh. Bangladesh will look to kick on, knowing the cherry is ripe for the picking.

The author is a Bangladeshi, a raconteur, a teacher and an erstwhile economist and political scientist. He finds peace in objectivity. He tweets as @radioslime (twitter.com/radioslime)