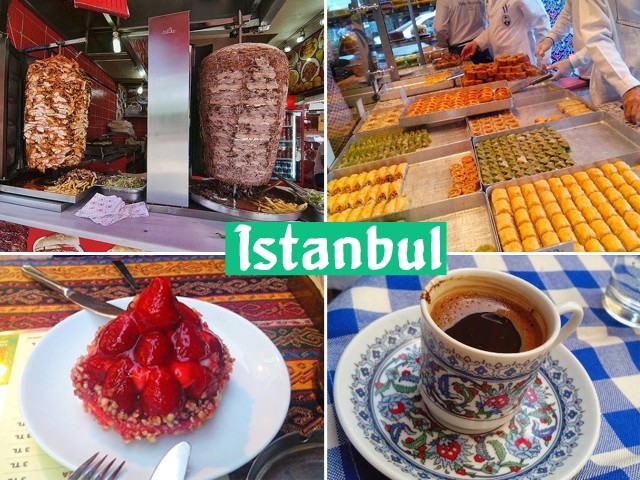 One of the main attractions of the city was the exquisite food.

On my visit to Istanbul, one of the main attractions of the city for me was the exquisite food. Their cuisines looked simple yet tasted amazing. It was mostly mild yet full of flavours. One could eat here for days and not miss the oily biryani and karhai back home.

Therefore, here is a list of 13 food items which you must try if you ever visit Istanbul:

This one is a no-brainer; there is not a thing which says Istanbul like freshly grilled Doner Kebabs. It’s by far the first thing that anyone tries as soon as they get to Istanbul and rightly so. The beef, along with the usual option of chicken as well, is grilled to perfection.

It is commonly labelled as a shawarma-type dish by tourists,  and is usually served with both bread and rice – which they call the pilaf. While Doner Kebabs are available just about everywhere in the city, the local street side or small cafes in Old City are known as the ideal places to eat. I wouldn’t recommend anyone to try this at a fancy restaurant in Taksim, as its better to dine where the locals eat.

Pide can be precisely described as the Turkish version of a thin-crust pizza. It consists of a flat, very thin bread topped with a layer of cheese and meat (or vegetables). It’s usually complemented with fresh greens, which can be adjusted to taste, and is commonly seen as easy snacking.

The servings normally look huge but that is because the bread is very flat and thin; thus one person can easily eat one serving.

Simit is a must try!

Its dry, circular-shaped bread is usually crusted with sesame seeds. You get these from street vendors in just about every street corner of Istanbul. They can be eaten on their own, even though the vendors also serve them with ad-ons such as cream cheese or even Nutella.

Certain people may find this bread a bit too dry for their liking, but I personally thought it was great and perfect for snacking while exploring the streets of Istanbul.

This is a no-miss. It is written as Cai, but pronounced as Chai; similar to how we say it back home.

The locals consume this as often as water intake, thus three to four cups in one sitting is a common practice. People in Istanbul are generous with tea, they usually serve it complimentary after every meal. It is served with sugar cubes and is similar to Kahva, but with a deeper aroma and taste to it.

The Istanbul experience is not complete without the taste of freshly made, melt-in-your-mouth Baklava. This sweet dish is famous all over the Middle East. Nevertheless, consuming freshly made baklava from the sweet store is a whole new experience on its own.They come in countless varieties and flavours – chocolate, coconut, almond and pista. The combinations are endless and the best place to have this dessert is at Hafiz Mustafa in Old City.

Mezze is a set of assorted snacks which are served cold and as an appetiser before meals. They have a range of delicious things such as hummus, garlic yogurt, freshly cut vegetables, eggplant salad, olives, falafel and bulgur rice. These are just a few of the items; the combinations differ from one place to another but all of them have one thing in common – they taste absolutely amazing.

Reminiscent to the makai wallas that are commonly seen back home, Misir is also sold via street vendors in every corner of Istanbul.

Ranging from TL3 (the more tourist-intensive areas) to as low as TL1.5 in the quieter places. This healthy snack is another great option for something to eat on the go. It tends to be a lot milder then the makai served to us back home, thus make sure you ask the vendor to apply the lemon and salt as per your preference.

In other words, desserts. Check out the picture below, it was taken at a bakery of local goodies.

This was a strawberry tart that I tried with a friend at one of the local cafes. It was generously topped with cream-filled strawberries and a scrumptious chocolate base. It was so delicious that I couldn’t get enough of. I remember us being grouchy due to an extremely tiring day, but after trying this delightful dessert, we were far more radiant.

Kumpir has to be one of my most favourite foods in Istanbul. It is commonly available in the city and consists of a huge baked potato. First the potato is hollowed out and then mixed with seven to 10  toppings of your choice,  then scooped back into the ‘jacket’ of the potato.The toppings available consist of simple butter, mayo, olives, couscous, sausages, corn, cheese, assorted vegetables, tuna and the likes. The prices vary with the number of toppings that you choose.

My advice is to select a maximum four toppings so that you can relish the taste of the potato as well, without confusing the savour with too many flavours.

If you think the strawberry pastry captivated your attention, then this famous Middle Eastern sweet dish is certainly at par.

It’s essentially a pastry of vermicelli stuffed with cream cheese or simple custard. However, the recipe differs from place to place. It may remind you of sheer korma back home, even though it’s in solid form. However, I feel Kunefa beats it by a far margin.

This is another trademark item which is not to be missed. But to be honest, I realised that this deserves to be mentioned after thoroughly thinking it through a few times.

Adapting to the taste of Turkish coffee is challenging for those who hold the habit of drinking sweet milky coffee. It is intensely strong, rich and full of flavour. Even four cubes of sugar would not alter its taste. While I am not a die-hard fan of coffee, there was something about this drink which appealed to me.

The Turkish version of this Italian dish is quite different from most foods.

The dumplings are made of pasta stuffed with beef or mutton mince and thoroughly covered with garlic yogurt sauce. It’s similar to the combination of white Alfredo and Bolognese, except it may be healthier owning to the fact that the sauce is yogurt-based instead of cream.

Kokorech is basically goat intestines. Seems strange to us but it is a delicacy there. This is also found very easily in almost any cafe and is served in bread, giving an intense meaty taste. Give it a try if you are tolerant enough, as I could only manage one bite myself. This dish is undoubtedly for serious food-experimenting enthusiasts!

Please note that these dishes are what complimented my taste buds; if there is something that you have tried and feel it deserves to be mentioned, then do let me know in the comment section.