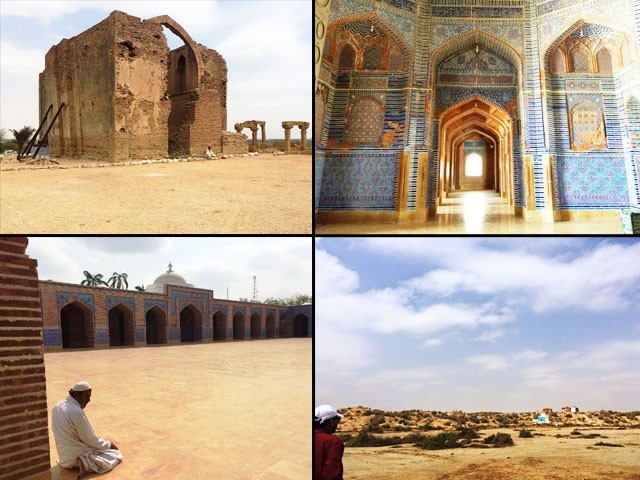 Those who aspire to travel spend a lot of time planning trips to foreign lands. But what they don't know is the fact that the same time, what also exists are whole new worlds within one’s own country.

I am glad that the first post I will be writing here will be about one of my trips within Pakistan. Those who aspire to travel spend a lot of time planning trips to foreign lands. But what they don’t know is the fact that the same time can be used to explore the unique worlds that exist within Pakistan.

I got such a chance this March, when I joined a small group of travel and photography enthusiasts led by Jibran from Tangerine Media and Sanam from Funverks on a day trip to the out skirts of Thatta. This entailed a combo of visits to Makli and Bhambore, both of which are situated near this small city.

Makli is one of the largest necropolises in the world, which is also a UNESCO world heritage site. It is approximately a two-hour drive from Karachi and is perfect for a day trip where you can go early in the morning, see the place and get back home by evening.

Hundreds of years old it looks mostly like a desert but a closer look reveals many beautiful monuments and structures weathered away by time. Photo:Urooj Hussain

I had no idea that such a famous site existed in my very own backyard. The place, although being mostly dry and barren, is very serene and peaceful. Essentially, one is hiking through what in simple terms is a very large and ancient graveyard; the open roads and clear landscape make up for a very calming experience.

I don’t know if it was the weather that day or simply just the way that place was, but the light scattered everywhere in the most beautiful way and it helped me take some really good photographs with just my camera phone.

Look at the man in the turban sitting in front of this tomb in the picture above. He was just sitting there motionless with no expression. He looked pretty awesome to me.

The remains of a beautiful wall? near the tomb of “Mai Makli’ the female after whom the necropolis is apparently named after. Photo: Urooj Hussain

The open landscape was just breath-taking here. The winds were so strong that at times, they would not even let you walk in a straight line (or maybe it was affecting me so much because I am kind of tiny).

A word of advice, take the ‘scenic’ route and walk through the cemetery rather than driving through it. It will be a bit of a walk but it is definitely worth it. Just make sure you go during a time when it is not too hot.

Once we got through this area, our tour bus took us to see the famous Shah Jahan Mosque  in Thatta.

I took this picture while hiding behind a pillar. I thought he might get offended if he saw me taking a picture of him while praying. Photo: Urooj Hussain

Inside one of the many domes. Photo: Urooj Hussain

Our last stop was Bhambore, an ancient city now in ruins, near the bank of the Indus. Being closer to the port, it was also near to where Muhammad bin Qasim had arrived in the subcontinent. The ruins themselves are quite interesting remnants of forts and mosques.

Sadly, it is not as well preserved as it deserves to be.

The last bit of the trip was a small traditional boat ride on the creek. We had to take off our shoes and walk through the clay-like mud to sit in the boat. It was a great experience.

By the end of the trip, I was badly sun-burnt, had walked about 16,000 steps (as per my iPhone pedometer), had gotten a bad cut on my foot, and had also – accidentally – eaten a bug or two; but for all the beauty that I came across in this trip, these problems were worth it.

I saw some amazing artifacts of history and it made the experience awe-striking. Not to mention, I had some really fun people to travel with.

The dos and don’ts I learnt from this trip were:

– Take a mini first-aid kit (pain killers, bandages – but nothing too heavy)

– Take an extra pair of socks

My trip to Thatta was very rewarding and I look forward to visiting more such hidden treasures in Pakistan’s culturally diverse landscape.