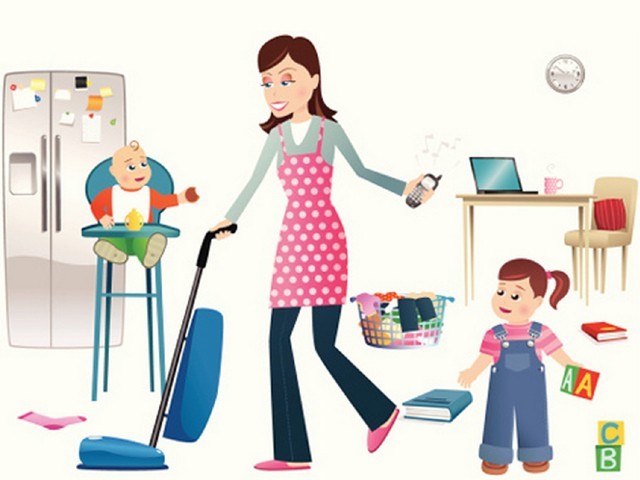 Stay-at-home mothers – with all their services for the house and family – should make $73, 960 a year, something that he cannot afford to pay his wife with his income. PHOTO: TWITTER (@kelliethewriter)

Being a mother is the toughest job in the world. It requires immense patience, diligence and courage, in the course of moulding young souls into responsible individuals who will be capable of obtaining a livelihood one fine day.

While the importance and due respect of any job shouldn’t be suppressed, we as a society are at a consistent risk of undermining – or worse ignoring – the role of mothers in our lives.

“How do you kill time, staying at home all day?”

This is the most frequently posed question to any mother who doesn’t pursue a career. The words fully serve the purpose of devaluing everything a mother does for her home and children every day. This disparaging attitude is now highly prevalent in developing countries like Pakistan, where many women are nowadays joining the workforce, compared to a few years ago. Therefore, mothers who wish to remain housewives, face unjust statements and comparisons with working mothers.

No matter how much religious scholars preach the esteemed importance of motherhood in every religion, we fail to incorporate in us the encouragement and appreciation that every mother is worthy of. Even events like Mother’s Day fail to make up for the lack of acknowledgement and condescending attitude of the larger society. As children, we are mostly unaware of all the good our mothers are doing for us. In that sense, Mother’s Day helps us in expressing due love and appreciation to our respective moms, but it does not help eradicate perceptions like the above, that are now frequently tossed upon any stay-at-home mother by her friends or even relatives.

In the past few months, there has been a huge emergence of articles and blogs on the internet that laud the services of mothers, compare stay-at-home moms with working moms, praise the contributions of a woman towards her home, and most of all, recognise motherhood as a real job. Though most of the writers of such pieces are women, men have joined the writing spree as well and actively advocate the hard work of their children’s mothers through such articles. The number of all such writings highlighting the significance of a mother’s role is only increasing with time. The society’s disrespectful attitude toward home-makers explains the sudden need to do so.

A recent blog written by a Texas-based husband, Steven Nelms, has gained a lot of popularity on social media websites in the past few days, on account of its catchy title:

“Husband says he can’t afford his wife as a stay-at-home mum and his reasoning adds up. Big time.”

Nelms’s long essay, lauding his wife’s efforts as a mom, has grabbed over 10.2 million views since it was first published online on April 4th. Just reading the title, one might think that Nelms is trying to devalue mothers who stay at home. But the perception is removed midway through the essay when he describes all the chores – laundry, cooking,  paying bills, buying groceries, cleaning, and the likes – that his wife is doing for free, while mentioning the respective monthly salaries of those tasks alongside. He then does the math, and figures that stay-at-home mothers – with all their services for the house and family – should make $73,960 a year, something that he cannot afford to pay his wife with his income.

The ever-increasing need to campaign and emphasise the importance of a mother’s job is provoked by derogatory remarks from a certain segment of the society, worldwide and increasingly in Pakistan, where a particular group quotes “sitting home” as highly unproductive, coupling it with the use of phrases like:

“Women are not baby-producing machines.”

The latter, in particular, undermines the efforts and sacrifices of Pakistani grandmothers and great grandmothers, who raised large families staying at home, and devoted all their lives wholeheartedly towards that significant cause. They never felt the need to prove the importance of their “job”; rather they took pride in it. This was because in the olden days, women in Pakistan were duly acknowledged for their role at home. Marriage and motherhood were a well-revered identity for them. Now, many women are seeking that identity outside the home, amidst societal pressures like the quest for appreciation, or simply meeting the financial needs of their households.

Of course, there are many ambitious women who have a passion for excelling in their fields of choice and gaining true fulfilment from the whole process. This inspires them to pursue a particular career and work outside the home. Today, the independence and support granted to such women is a pleasant change. They enjoy a much higher level of freedom than women of the past, many of whom couldn’t pursue their dreams, on account of the social and cultural norms, especially prevalent in developing countries.

In Pakistan, many of these constraints are still present, and even mothers in educated families don’t get the permission or the support to work outside home. On the contrary, those women who wish to stay at home and focus solely on their children are being hit by condescending remarks of not being sufficiently productive for the family. Their method of seeking fulfilment solely through childcare is not admired in the way it used to be in the yesteryears.

While the increased freedom and encouragement granted to working mothers is commendable, it should not inject in us the societal norm of castigating stay-at-home mothers for their single role at home. This single role in its entirety marks the foundation of our next generation’s values and moral principles. It is therefore a colossal job, one whose importance shouldn’t require frequent reminders to us through the social media.

Real freedom is the one that comes with making independent choices. The same should be the rule here. There shouldn’t be one social definition of considering a mother as more or less productive. We need to be less judgemental about the efforts of others and refrain from passing rude remarks at the cost of demoralising the prestigious duty of motherhood. The need to recognise a mother’s devotion will always be there. But we must remember that respect and recognition entail much more action than just tribute-filled blogs.