Pakistan will lose to Bangladesh…again 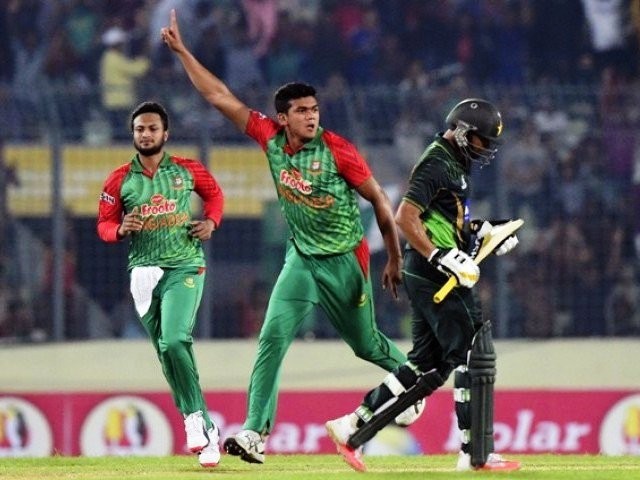 Pakistan cricket is bizarre, especially with regards to team management and structuring. Coaches, managers, captains and players, all seem to be stuck in a quagmire when it comes to helping Pakistan to get out of the plethora of issues it is plunged it.

Bangladesh cricketer Soumya Sarkar plays a shot during the first one day international cricket match between Bangladesh and Pakistan at the Sher-e-Bangla National Cricket Stadium in Dhaka on April 17, 2015. Photo: AFP

Six-months ago, had someone told me that Pakistan was going for a Bangladesh tour, I would have counted it as nothing more than a bunch of practice matches. I would have been sure of Pakistan’s success and I wouldn’t even have minded betting on Pakistan for once. But things are not the same anymore, and for a Pakistani cricket fan, it’s calamitous to say the least.

The match of Friday is a testimony of that.

This tour would not have been much of a hassle if our policies were straight-forward and simple. This tour would have been a mere formality, and we would have won our matches splendidly – if only the management was prudent enough to listen to experienced players and create a blend of young and senior players alike to bring forward a formidable side.

However, that did not happen.

I remember the last time we faced Bangladesh – during the Asia Cup – it was Shehzad, who scored a century against them and it was Umar Akmal who made us cross the line with a sublime Afridi-esque inning in the middle and a typical Fawad-like effort. We were chasing 300 plus and were in trouble at the start; however, not once was I worried about what the result will be – because I trusted my team.

But this time, I have no faith in them. And I am worried about our chances at winning.

Anyone who witnessed Bangladesh’s performance in the ICC World Cup 2015 would know that this tour is not as easy as it might seem to most cricket pundits. They qualified to the quarter-finals at a time when nearly all of their players were inexperienced. They defeated England and were mighty close to beating World Cup finalist New Zealand as well. So they mean business.

They have the confidence and the passion to take on any team that comes their way, and yesterday’s match showed it. Also, from 2013 onwards, Bangladesh has played 23 matches at home, where they have won 11 and lost 11 with a win percentage of nearly 50%, which is better than Pakistan (38% win ratio) and England (44% win ratio).

Bangladesh Cricket Board (BCB) XI celebrate after defeating Pakistan by one wicket in the one-off warm-up game before the ODI series. Photo: AFP

On the other hand, Pakistan team is clearly in crisis mode.

We lost the only practice match against Bangladesh Cricket Board XI, a team which had only four international players playing against our complete touring team. We were 203/8 in the 44th over, and even though Fawad took us to a respectable 268, it was chased down with ease. I can’t recall a time when Pakistan lost a practice match with Bangladesh.

But oh well, I guess there is always a first time.

On Friday, our fears became reality, where we lost to Bangladesh after 16 years by a comprehensive margin.

There is a lot to criticise about the way we played, but seeing that most of our players were young and our captain was inexperienced, it would not be appropriate to be brutal about their performances.

Azhar Ali played an inning that one wouldn’t have expected him to play, at the top of the order, scoring a well-crafted 72-runs and debutant Muhammd Rizwan played like a gem, at the lower end of the innings. However, questions need to be asked about the team management (especially Waqar Younis and Saqlain Mushtaq) as to why the batting line-up was so ill-prepared? Why did our batting side look so vulnerable?

Azhar Ali scores a fifty in his first match as the ODI captain. Photo: AFP

Furthermore, I cannot not understand the logic behind Mohammad Hafeez’s out. He was the highest run-scorer in the practice match; so what went wrong? Also, it needs to be answered as to why Fawad was batting at number six, when he is not a big hitter. Irrespective of how weak the team is, a few tweaks here and there could have made a huge difference. But our inept team management made sure that we lose badly, and if they do not mend their ways, the upcoming matches would have the same fate.

Pakistan needs to look at the crisis we are in and then come up with a viable solution. True, this is the first time, in more than eight years, that we are playing without Misbahul Haq and Shahid Afridi – who were the cornerstones of our team; true, we are going in with a captain who doesn’t have an ensured place in the line-up and it’s his first series as a captain of Pakistan in any format; true, Saeed Ajmal and Hafeez (hopefully) are making a comeback after months of ban and Junaid Khan is making a comeback after a long injury layoff, so their effectiveness seems to be compromised; and true, we dropped Ahmed Shehzad and Umar Akmal, two of the brightest batting talents in the country, right at the time when they were supposed to be given a more responsible role, so our batting seems ever more weaker than it was before – but all of this does not validate such a harrowing defeat.

Teams have gone in with worse and have come out with better outcomes, just because their coaches and managers were strategic enough to understand their strengths and weaknesses.

I am all in favour of rebuilding of the team, but you can’t just rebuild it by dropping all the important players and replacing them with the young ones. There is a method to every madness but the kind of madness PCB is showing is just hilarious and downright scary. I fail to understand why we can’t find a proper time to do a certain thing. As far as I can recall, only West Indies has the tendency of making a bad decision at a crucial time more frequently than Pakistan.

When we need the likes of Shehzad and Umar, we drop them. When Kamran Akmal and Shoaib Malik should be given a chance on their preferable positions to make a comeback and fill the space of the seniors who have left, we ignore them. When we finally have the chance to include Anwar Ali into the mix to give him a chance to shine, we forgot him. And so our self-destructive ways continue to hinder our progress.

Pakistan cricket is in its worst shape right now. Our players have not played cricket at home for years and the authorities who are responsible for developing cricket in this country have their own set of agendas to follow. It looks hard for us to win against Bangladesh in the next match and I won’t even be surprised if Pakistan loses the entire series.