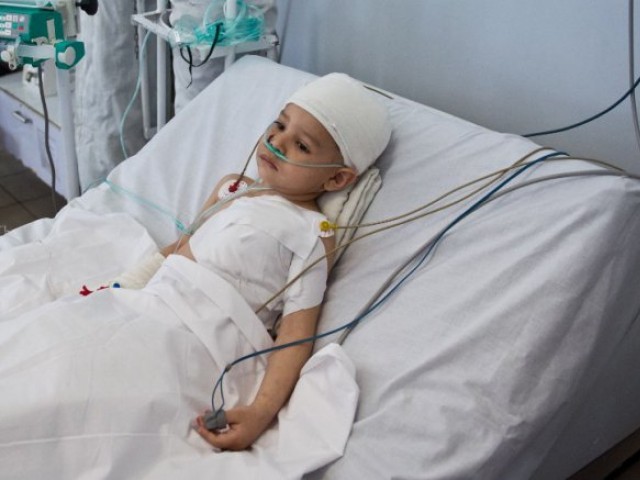 Ali* was on bed 16. He was 10-months-old and critically sick. According to his mother, Ali had been quite normal when he was taken to a neighbour’s house by the neighbour’s daughter a few days ago.

This was not the first time the neighbour’s child had carried Ali to her house to play with him. However, what was different this time around was that the child brought Ali back comparatively earlier after taking him, presumably because he was fussy. That, in itself, could have been a red flag for the parents to suspect something. The parents, unfortunately, let hours pass assuming that Ali was just colicky.

When Ali went from being fussy to lethargic, his parents panicked and rushed him to a nearby clinic. The facility was far from optimal to take care of the infant, given his critical condition, hence the parents decided to bring Ali to the emergency room (ER). Ali was rushed directly to ‘resus’ (resuscitation or shock room). He was gasping periodically, and there was hardly any movement in his body or his eyes, which were ominous signs. Ali was immediately intubated and moved to the CT-scanner, where the results revealed massive bleeding in his brain and infarcted (dead) brain tissue.

Could the bleeding in the brain and subsequent coma be explained by trauma of some kind? Yes, it could.

Could it have been an accident? Yes.

But what was more concerning was the trauma inflicted on Ali, although no obvious signs of bruising or swelling were evident on his body or scalp. My years of practice in the paediatric ER have made me realise that as a child advocate, I must automatically assume violence has been inflicted on the child, especially in situations where brain imaging reveals bleeding. There might not have been any way to prove that Ali had been abused, but as his ER physician, my index of suspicion remained high.

What concerned me more when I questioned Ali’s parents was that in between the 18 hours, they had still not interrogated their neighbour’s child regarding what exactly had transpired.

Over the course of my ER shift, I observed Ali very closely. He was being bagged – a nurse was forcing oxygen into the baby’s lungs through the tube that we had placed in his wind pipe. A better situation would have been putting him on a ventilator. However, in a developing country like ours, ventilators are a costly luxury in the Intensive Care Unit (ICU) and the paediatric ER is way down on the pecking order for those devices.

Ali did not move at all during the time I observed him. His vital signs, heart rate and blood pressure were precariously maintained by medications that we had him on. He urgently needed a ventilator but there were none available in the ICU of the hospital. We were certainly not doing the child any favour by bagging, adding insult to injury because of the trauma to the lungs through such a primitive process of managing Ali’s breathing.

But what else could we do?

Though, from another perspective, Ali did not need that ventilator. The lack of oxygen, bleeding and dead tissue that had already occurred in the brain was likely going to put Ali in a vegetative state. The ventilator was simply going to prolong the inevitable.

By then, Ali had been seen by neurosurgery, neurology and critical-care department, and a consensus had been reached, a grim outlook that had already been discussed at length with the parents. Ali’s parents seemed to be in denial. More so the mother. I was surprised that she was quite convinced that the baby would miraculously recover soon, which is why she had refused to sign the ‘Do Not Resuscitate’ (DNR) form. She validated her decision to maintain full life support for Ali because her religion and her God would not allow her to do otherwise.

It is great to have hope, but I believe a rational approach to hope must be exercised, especially in the ER, given such humongous odds of poor outcomes. I felt frustrated by the status quo and it was then that I took the matter into my own hands, and approached Ali’s mother.

In my anglicised Urdu, I explained to her, with as much objectivity that I could muster, Ali’s poor prognosis. I told her if Ali were to survive the ER stay and be admitted to an ICU on a ventilator, chances were his development would be impacted. I also mentioned the substantial costs of ventilator usage in an ICU setting. She told me to go away and return when Ali’s father was back. Ali’s father was on a wild goose chase to find a ventilator in a credible paediatric ICU in some other hospital in Karachi which would prove to be a tall order for him.

I did return to Ali’s bedside once his father was back and repeated all my long-term concerns for Ali. I didn’t expect much ‘success’, as had been my general experience with parents in the ER I used to work in while I was in the US. However, when Ali’s father reported he was waiting for Ali’s aunt, a physician, to get to the ER to make a decision, I felt hopeful.

It is strange that I strongly felt like advocating for Ali by not escalating his care; by discouraging placement on a ventilator, primarily given what the future for him looked like. In my five years in the ER in the US, I had never spoken to parents about DNR status. I had never seen a patient die in the ER there during my shift. That was my gauge of success. Resuscitating every critically sick child and placing them on ventilators, regardless of likely outcomes, favourable or unfavourable. Here, in Pakistan, for the first time in my life, I was cognisant of what I, as a medical practitioner, was doling out and it was not always in the patient’s best interests.

Ali’s aunt came, took stock of the situation, upheld my thought process and made the decision to not have Ali moved elsewhere. She convinced Ali’s father to sign the DNR forms. Amazingly enough, she convinced Ali’s parents to extubate (pull out the breathing tube), stop all cardiac support medications, and to let Ali die.

I was even more amazed when Ali’s parents consented. I felt an intangible optimism. Perhaps an inappropriate feeling given the situation, but I could not help it.

“Will he struggle to breathe prior to dying,” asked Ali’s mother.

“I don’t know,” I said, while I frantically hoped that he would not struggle.

“How long will it take?” asked Ali’s father.

“I don’t know.” I replied, hoping that it would not be a protracted process.

“What resistance were you really expecting?”

It wasn’t like the tube, though Ali’s life-line, was tied to his trachea.

I then stopped his cardiac support medications and just observed him and his breathing. But then there was no breathing as there was no bagging. Yet his heart rate chugged along in the 70s (beats per minute), slow for a 10-month-old baby, but expected given his critical condition. His oxygen saturation remained in the 90s initially, but then started dropping; 80s, 70s, and then hung around there, as if providing company to the heart.

“Give him a chance; he might live through this and what happens next is really not for you to worry about,” said my inner voice.

But I stood my ground and I quelled the urge to re-tube him.

I watched Ali for another 20 minutes; he remained limp, his pupils completely unreactive. I also continued to closely follow the cardiac monitor.

“Why is he still on the monitor? Take him off,” that inner voice chimed in again.

Although I came really close to turning off the monitor, I was obsessed with that screen. I was willing it to show what I was hoping. And then Ali’s pulse started dropping; 60s, 50s, 40s, 30s, 20s, 10s and then a flat line.

Ali did not struggle. He passed away, peacefully.

It was God’s will.

*The patient’s name, age and details of the event have been changed significantly hence any resemblance to someone real is purely coincidental.

The author acknowledges Drs MMK and AJ for critically reviewing the article and providing feedback.