What do the upcoming UK elections have in-store for British Muslims? 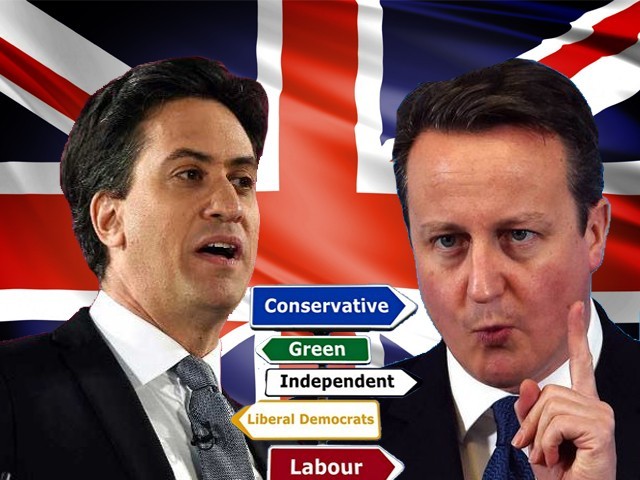 The electoral battle in the United Kingdom is getting bitter and interesting by the day.

While the real fight appears to be between the Labour Party and the Conservative Party, the Scottish National Party (SNP) is gaining further ground and the Nigel Farag-led right-wing United Kingdom Independence Party (UKIP) is expected to win some parliamentary seats. All of this hints toward a hung parliament once the British voters cast vote on May 7.

In the 650-member strong British House of Commons, each MP represents a constituency. Presently, the Conservative Party has 303 seats while the Labour Party is the second best with 256. To form a majority government, any single party would require a magical number of 326, which appears highly unlikely in the coming elections as most pundits predict a hung parliament with no clear winner.

The most important issues are, of course, with regards to the country’s economy, education, healthcare, housing, defence, taxation, and survival of the United Kingdom as one entity after the Scottish referendum, immigration, future relations with the European Union and the kind of world power Britain aspires to be. All of this is besides host of domestic issues like spending cuts, jobs and the likes.

In a country of roughly 65 million (Britain, Wales, Scotland and Northern Ireland), the perceived rise of religious radicalism, especially among young British Muslims, is perhaps fast becoming one of the issues. Whether this will determine the manner in which the British voters will cast votes in the 2015 elections can’t be said with certainty.

Muslims form roughly 4.8% of Britain’s population. Their numbers, according to the 2011 census, are almost 2,786,635, and may have actually crossed the three-million mark by now.

Peter Oborne, Britain’s leading political commentator and author, is concerned about the kind of language that is being used by politicians and media to describe Muslims in Britain. Oborne fears that such language has the potential to create fear and choke democratic spaces. In Gunnersbury he made those fears known to me when he said,

“I think there is a danger that Muslims will be cut out of the British elections this year. Both the Labour Party and the Conservative Party got close to using language which sort of almost criminalises significant parts of Muslim community. The language of radicalism, extremism, Islamism and so forth is creating an environment where there is less and less space for Muslims to express forcefully legitimate political views, especially on foreign policy. This is potentially very worrying.”

But there is also a growing worry about the stray incidents of some educated British-born Muslims from immigrant communities embracing radicalism or joining the Islamic State of Iran and Syria (ISIS).

Mainstream British media is full of stories about Islam, Muslims and ‘growing Islamophobia’. A recent opinion poll, conducted by Survation for Sky News, found out that community relations between Muslims and non-Muslims in Britain have fallen apart in recent years due to growing levels of suspicion and hostility.

The survey results reveal that nearly two-thirds of non-Muslim British nationals feel that:

“Islam and British culture and values are not compatible.”

Interestingly, the survey of 1,000 British Muslims revealed that nearly two-thirds believe the opposite.

In the on-going Leaders’ Debates, Britain’s top leaders are being quizzed on many important issues that include the future of the United Kingdom, immigration, health, economy and the likes.

As expected, the UK media stands largely divided in deciding a clear winner of the Leaders’ Debate held in the first week of April.

The ICM/Guardian poll put the Labour Party leader, Ed Miliband, slightly ahead of the current Prime Minister and Conservative Party leader, David Cameron, but the The Telegraph and The Sun declared that Miliband flopped and blew his chances of becoming the country’s next prime minister.

On average, all four major polls suggested Cameron and Miliband as “joint winners” in the April 2 Leaders’ Debate.

Ed Miliband, who claims “I am ready” to be Britain’s next prime minister has plans for the low paid workers, as his Labour Party plans to include an eight-pound minimum wage system by October 2019. He’s also perceived to be ‘softer’ on immigration.

In a Leaders’ Interview, conducted on March 26, however, David Cameron performed very well – a view that was generally shared by a panel of unclear voters in five marginal constituencies. Many panellists considered that Ed Miliband’s performance, in the same interview, was less confident than Cameron’s.

It remains to be seen whether the Conservative Party will triumph in the parliamentary elections scheduled for May 7.

There is a lot of debate in the British press on the failure of Britain’s Conservative-led government in relation to its restrictive attitude to immigration. That is perhaps why 50-year-old Nigel Farag, the charismatic leader of the UKIP, is gaining some acceptance in parts of the United Kingdom as he remains vocal with his party’s demands for Britain’s withdrawal from the European Union and limited immigration. In some parts of the country, his views are heard and taken seriously by potential voters.

In the last elections, UKIP didn’t fare well but things could be different now.

How big is the issue of immigration in Britain?

Andrew Whitehead, historian and former BBC journalist, believes that immigration will not be a prominent issue but can’t be ignored either. In an interview at Westminster, London, he said,

“I think there’s a huge amount of concern, and incomprehension, about the way in which a small number of well-educated and British-born Muslims from immigrant communities have been won over to radical lslam, and in some cases have travelled to Syria to support the Islamic State. I don’t think it will be a prominent election issue, largely because the parties don’t really differ in their approach. But immigration more broadly, and particularly from within the European Union, will be a key issue because of the rise in the opinion polls of UKIP.”

How are politicians in the UK engaging with Muslims?

According to Dr Dibyesh Anand, the head of the Department of Politics and International Relations at the University of Westminster, Britain, has a “dubious record” in engaging with “Muslim-chauvinist extremism.”

In a conversation with me, Dr Anand said,

“It (Britain) has had no hesitation in encouraging and supporting violent groups overseas so long as it served foreign policy purposes and did not lead to violence within the UK. Saudi Arabia, which has a nasty record in funding deeply sectarian and fanatical version of its ideology to different parts of the world, is a strong ally of the UK,”

UK cities host all kinds of preachers spreading hatred. It is public knowledge that the UK allowed its young Muslims to go to Syria to fight against the Assad regime.

He also believes that,

“During this election year, mainstream political parties are scrambling to compete with the far right UKIP and there is a risk of moral panic and media frenzy adding to the already entrenched Islamophobia and anti-immigrant-ism.

When we come across stories of young British men and women leaving their families to join the ISIS, we need to remember that this is a collective failure of British society, community, and family. That a distorted and violent version of faith attracts a few youngsters is partly to do with a sense of victimisation where these alienated young people associate with an imagined ummah that is only a victim and never a victimiser. The government and the communities have failed to tackle the pro-active grooming of teenagers by ISIS sympathisers.”

It seems that Britain’s fractious relationship with Islam and Muslims will continue to occupy media space and leave its imprints on the country’s political landscape, but it is hard to tell whether a British voter will go to the polling booth with this issue in his/her mind.