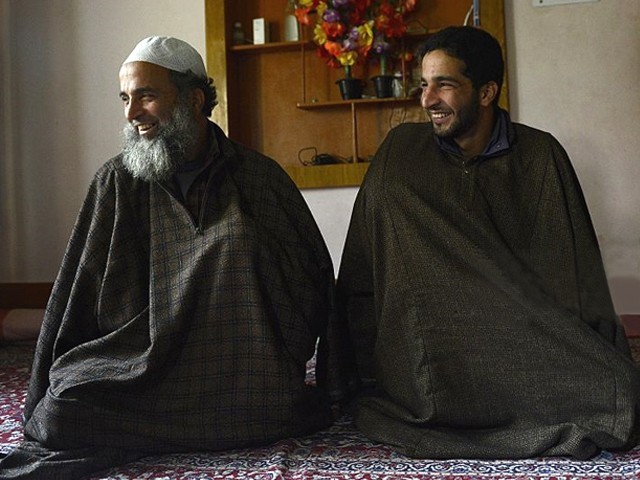 Muzaffar Ahmed Wani, (L) Kashmiri resident, school teacher and father of the top commander of the biggest Kashmiri rebel group Hizbul Mujahideen, speaks as he sits alongside another son, Khalid Wani during an interview in Tral, south of Srinagar. PHOTO: AFP

Khalid returned home in peace. Not on his own legs, but on four shoulders. He looked alright, just that he did not talk. His bones made a cracking sound, his teeth floated in a pool of blood. His face was mutilated, his nose had been cut. He was not shot at; they had been very good to him. They had only tortured him to death. His face was covered with stale blood. His blood.

Khalid’s ‘crime’ – he happened to be a brother of a freedom fighter, a militant.

Khalid’s brother Burhan Wani, on his own, has given seven lakh Indian forces sleepless nights. He has been taunting them, irritating them. He has been defeating them alone. In the forests of Tral, he has been hunting them.

They call Burhan the most wanted “terrorist” in Kashmir.

To ask why Khalid was killed is, I suppose, unnecessary. However, this question makes for an interesting response. When a state with all its military structure, a client government, a compromised media and intelligence grid cannot track down one individual, they decide to push him to the wall. They plan to break him down, weaken his strengths. Reprisals are used as a state policy to make individuals succumb. In Kashmir, the Indian state has been using this tool systematically and effectively for co-opting the dissenters.

Over the last few years, Kashmir has seen a new kind of resistance movement. Unparalleled in the past, people are using both violent and non-violent means to fight against India. From the internet to the streets, Kashmiris have transformed every possible space into a protest ground. These unorganised attempts of political expression have caught an organised state structure off-guard. The dominance of Kashmir’s political narrative — constructed by young Kashmiris from their lessons in history — in academia, in journalism, in online spaces has made the Indian state look for cover. The educated rebel is more dangerous to them.

Now the state wouldn’t want to appear incompetent and incapable to its people at home. It has to do something to show its presence. Therefore, it terrorises – it kills.

Does time have anything to do anything with the killings?

The state would not want a healthy discussion or a warm welcome on the return of the Pandits by people in Kashmir. Ideally, it would like to go the way it wants to execute the “composite township” agenda. The resistance to such nefarious and colonial designs by the people goes against the interests of the state. Therefore, there has to be some diversions in the debate. Now the state has to do something to reassert that Kashmiri Muslims are “terrorists”, they won’t let Pandits return and live safely. A drama needs to be scripted. An encounter needs to be staged and executed with accuracy.

Also, summer has arrived. People are emerging out of the rubble left behind by the devastating floods. The state will not want them to engage with anything but disorder. Doing so will allow the government to embezzle funds supposedly meant for relief and rehabilitation.

Also, to say that these encounters are staged to keep the Armed Forces Special Act (AFSPA) intact has now been established as a fact. Now that the illegitimacy of this act has been made public by the Jammu and Kashmir state assembly, such incidents will occur more frequently.

Now the army does not kill people only to complement national interests and state policies. In Kashmir, the armed forces are given hefty monetary incentives to kill people. They are rewarded with promotions and medals.

Like all other killings in the past, this killing will also be followed by a probe. Ironically, the same people who are involved in the killings will investigate it. Then there will be another killing and the previous one will be dumped. Probes are meant to buy time, erase evidence and construct new plans. Actually these probes are meant to pacify people and tame their anger.

Denying justice to the people of Kashmir is state policy, like the killings practiced with the brute precision. State institutions, like the judiciary and police, work to complement each other’s actions. They are synchronised to keep people in a perpetual state of waiting. With time, not only does evidence wither away, but people are drained of their resources to fight.

In such circumstances, where does one go?

The predicament is that justice is to be sought from the very same state which violates, which kills. This may not be a return of the “season of killings” (2008-10), but this surely is an extension of that.

The underpinning objective is: Kill them young.

Kashmir will celebrate the Indian cricket team's loss, no matter who they play against!