Zimbabwe’s visit to Pakistan: Dawn of a new era? 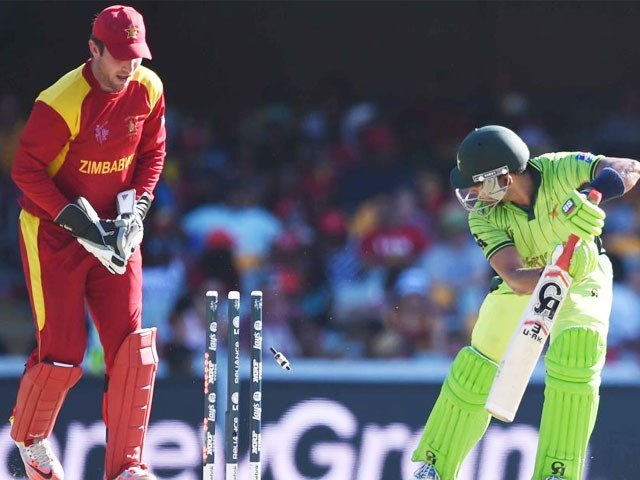 Sean Williams took the wickets of Umar Akmal (R) and Shahid Afridi as Zimbabwe restricted Pakistan to 7 for 235 off 50 overs. PHOTO: AFP

(The beards [bearded men] have gotten us into trouble again)

These were the first words I heard on a dreary school morning as news of the attackon the touring Sri Lankan team made the headlines.

A desolate shroud enveloped Zinda Dilan-e-Lahore as news broke that the bus carrying the touring Sri Lankan cricket team was fired at by a coterie of Kalashnikov toting ‘na maloom afraad’ in broad daylight.

The nearby elite would hear of such incidents up in the agencies next to the Afghan border and seldom, the Taliban types would make it as far as Peshawar, but a gun massacre somewhere as central as the Liberty Square in Lahore had a grim and deafening impact which left a bitter taste that the average Pakistani sensibility was becoming all too accustomed to.

Mayhem ensued, an investigation started, theories were spun and naturally fingers were pointed to the other side of the Wagha border as being a part of their bigger plan to monopolise world cricket. It sounds absurd, but they may well have pulled it off.

What followed though was the calamitous collapse of Pakistani cricket. Haroon Lograt, the then International Cricket Council (ICC) chief led the charge of condemnations as Senator Rehman Malik and his men down at the R-Block in the Pakistan Secretariat at the Ministry of Interior haplessly tried to trace down the perpetrators of this attack.

New Zealand and Bangladesh pulled out of their upcoming series in Pakistan. Insurance costs for series in the region shot up. The land of the pure was stripped of her World Cup hosting rights. Certain players found themselves in a spot of bother over the security situation at the Indian Premier League (IPL) following this incident and as would soon became clear, no international team would be visiting our grounds any time soon.

As a nation prone to nervous breakdowns, as Fatima Bhutto very eloquently puts it, cricket was a faintly glimmering lifeline in an otherwise sea of chagrin and chaos, but now the average Pakistani cricket fanatic’s situation was akin to that of a starving addict. He is not only suffering from withdrawal symptoms but he also finds his lips parched with thirst to see one of his express fast bowlers run off to the crisp 22-yard strip at Gaddafi Stadium and bowl at over 150 clicks.

The ever-friendly Arab Gulf was quick to lend a hand (even though that might not remain the case soon) as the UAE offered its facilities to be used as Pakistan’s ‘home turf’. It has been six years that the men in green have played a home game. An entire generation of cricketers has not relished in the feeling of having a zealous home crowd cheer them on.

Pakistan’s most successful captain, Misbahul Haq, has not led his side at home. Saeed Ajmal has not made the odd one go the other way on Pakistani soil and an entire generation of young Pakistanis has been robbed of the ecstasy – that is a packed cricket stadium.

As a zealous patriot, I must say with a heavy heart that as a nation we are prone to blaming our problems on others and sermonising whilst we are at it. If it is not RAW, then it is CIA, or worse, the Zionist lobby.

The cricket problem is different though; we cannot blame it on anyone, especially not when 17-year-old fast bowling prodigies are bribed into overstepping the popping crease at Lord’s. It leaves us seething, helpless, and at a loss for words. The frustration leaves us hapless, leaving an otherwise emphatic cricket fan to pause and painfully reflect.

The spot fixing melodrama of 2010 was a punch to the gut as was the IPL omission. Soon enough the post of chairman Pakistan Cricket Board (PCB) was reduced to a joke. Asif Ali Zardari’s classmate from Petaro and seasoned Punjabi industrialist, Zaka Ashraf, saw himself locked in a vicious legal battle with freedom fighter-turned-journalist-turned-caretaker civil servant, also known as Najam Sethi.

Say what you will, Sethi’s shrewdness proved invaluable in making sure that PCB’s isolation was short lived. In 2011, the hot-blooded Afghan team paid Lahore a visit for a non-international, shortly after which an International XI comprising of mostly retired players played a charity game in Karachi.

An ajrak-clad Sanath Jayasuriya vowed to make every effort to bring cricket back to Pakistan but his pleas fell on deaf ears. More recently our A team was matched up against the Kenyan national side which was brave enough to take the flight up to Allama Iqbal International airport.

But these were mere breadsticks before the actual meal; no amount of friendly non-internationals would satiate the Pakistani fan that craved much more. Twice it seemed that the Bangladeshi team would be bold enough to tour but security concerns saw that visit getting bogged down as well.

And then, a tiny sliver shone through. The emergence of the ‘Big three’ in the ICC was not met with much optimism at home of course, but the Board of Control for Cricket in India (BCCI) had been drawn into agreeing to play five bilateral series with Pakistan in the coming years. With December fast approaching, no tangible progress seems to have been made but a resilient Zimbabwean side has pledged to tour Lahore and Karachi this coming May.

Even though reports are preliminary, the possibility of seeing the stands at Gaddafi light up once more as one walks through the cobweb-laden corridor leading up to the Fazal Mahmood enclosure has breathed new life into the PCB’s efforts.

In his recent visit to Islamabad, freshly elected Sri Lankan president, Maithripela Srisana, assured Nawaz Sharif, an avid cricket fan himself, that the new Sri Lanka team would visit Pakistan very soon. Like a rhythmic Punjabi dhol (drum) beat that steadily gathers momentum, the revival is well and truly on its way. Ireland and Kenya have expressed interest and bigger and better things are only a matter of time.

Azhar Ali’s freshly inducted ‘boys’ are most certainly cornered but not as tigers, as phoenixes; phoenixes awaiting resurrection from the ashes as they touch down in Dhaka.The Bangladesh series is the calm after the storm, a period for trial and error. Up against a relatively weak side it is perhaps the ideal and only chance for the likes of Sami Islam and Mohammad Rizwan to make a name for themselves. With the A team flying out to the Emerald Island to play against Sri Lanka soon, one can’t help but be reminded of Iqbal’s splendour when he said,

(But of his barren acres Iqbal shall not despair,

A little rain and harvests will blossom, O Winebearer!)

The author is a thoroughbred Lahori and wide-eyed New Yorker pursuing a degree in Public Policy and South Asian Studies at New York University. He tweets as @ChZJanjua (twitter.com/chzjanjua)

With PCB and BCCI unable to set aside their differences, what happens to cricket?

#CricketComesHome: With tears and jubilation, the cornered tigers are back with a bang