And the award for the most ridiculous fatwa goes to… 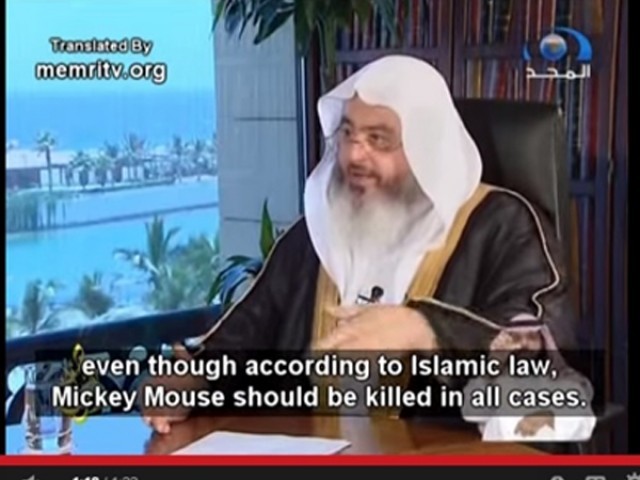 Muhammad al Munajid during an interview, while discussing how evil Mickey Mouse is. PHOTO: SCREENGRAB

Allegedly, the grand mufti of Saudi Arabia, Sheikh Abdul Aziz al Sheikh, recently issued a fatwa that allows starving men to eat their spouses to save their own lives. This will be considered an act of obedience by the wife and her willingness to be one with the husband’s flesh.

My initial reaction was laughter at the mufti’s idea to feed starving husbands. It was then followed by disgust at his misogyny and sexism, among other things. Fortunately, now we see reports of a rebuttal. Saudi media is attributing the source of this misreporting to the Iranian media. However, this is not the first time such a ridiculous fatwa ought to be considered for “The Weirdest Things Clerics Say” award.

Fake or genuine, sourced or un-sourced, we may defend or ridicule them, but these clerics and their edicts have made it to the headlines and should be considered for the nominations.

1) Girls, forget dolls and toys! Prepare to get married the day you blink after being born

The same holy grand mufti, Sheikh Abdul Aziz (any resemblance to a domestic Maulana Abdul Aziz in letter and spirit is purely coincidental) earlier decreed it permissible to marry girls under the age of 15.

As if the government wasn’t encouraging paedophilia as it is, Sheikh Abdul Aziz took it up a notch and thought even a 15-years age limit is too high. Girls of any age can be married as long as, well, they are ‘females’ of the human species. Basically, girls are eligible bachelorettes the day they are born. But then, why am I shocked if it comes from the grand mufti of a country where eight-year-old girls are married to 60-year-old men and it is not considered illegal?

2) There is jihad. There is rape. And then there is “sexual jihad”.

Syria and other Middle-Eastern countries have been plagued by rebels. In all this, Salafi cleric Sheikh Yasir al Ajlawni uploaded a YouTube video to promise that he will soon legitimise rape of all non-Sunni women by jihadi rebels in Syria. This includes non-Muslim women too, by the way.

Another cleric issued a fatwa that calls for ‘sexual jihad’. Whilst the former was more punitive in nature, Sheikh Mohamed al Arifi’s fatwa tilts towards more contributory sex whereby girls are encouraged to provide sexual services to these war-torn, tired jihadists to rejuvenate them. Thirteen Tunisian girls reportedly took their potential contribution too seriously and left for Syria to provide their services in the holy spirit of the Sheikh’s fatwa.

3) Infidel, if you think the Earth is round and revolves around the sun!

Some people think that the world revolves around them. Grand Mufti Sheikh Ibn Baaz of Saudi Arabia took it a step further when he decreed that Earth is flat and the sun revolves around it. Forget science and years of astronomical research, the mufti chose to substantiate his claim by declaring anyone who thinks otherwise is a blasphemer. Saleh al Fawzan, another senior Saudi cleric, also stated the same in a TV interview.

The best part of my childhood was watching Tom chase Jerry and Mickey Mouse being his adorable self. However, all this has been a fallacy according to Muhammad al Munajid, former diplomat of the Saudi embassy in the US, who thinks mice are repulsive and should not be loved by children.

Munajid also said that according to Islamic law, the fictitious character of Mickey Mouse is evil and should be killed. Instead of killing it, maybe the benevolent Saudi cleric can help Mickey Mouse rent an apartment with Salman Rushdie on a flat Earth where the sun revolves around it?

5) Say no to nudity during intercourse

Sex is commonly believed to be an intimate act that strips people involved of all inhibitions and helps strengthen the bond between them. It is a no-holds-barred, unclothed encounter that has no shame attached to it. However, the dean of Islamic law at Cairo University and Egyptian scholar, Rashad Hassan Khalil, announced that unclothed sexual intercourse annuls marriage.

Perhaps what he forgot to tell the world was how he expects couples to truly enjoy this act of nature with clothes on? Perhaps in all his wisdom he can write his own Kama Sutra for the benefit of generations to come and ease people’s worries about the fatwa.

Dr Izzat Atiya, head of the Department of Hadith at Al Azhar University in Egypt, came up with a visionary idea for females who work with male colleagues. The best way to stop sexual harassment or allow females to take off their veils and mix together with the opposite sex without contradicting Islamic laws is to breastfeed male co-workers.

According to Dr Atiya, male colleagues should be directly breast-fed at least five times to create a maternal bond so they can work together, without having sexual urges for each other.

The last one takes my vote for the most ridiculous fatwa. Which one has your vote?